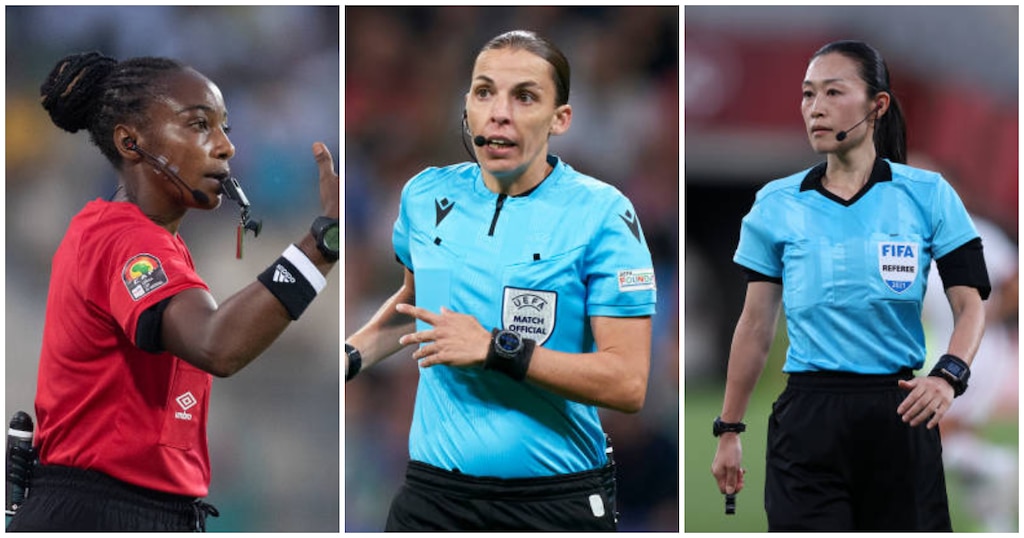 These three women are refereeing at the Qatar World Cup

Since the inaugural FIFA World Cup back in 1930, no women have been in command of the men’s football matches. Today, three referees are about to make history as the first women to officiate at the global event: Salima Mukansanga, Yamashita Yoshimi, and Stephanie Frappart.

Joining them are Karen Diaz Medina from Mexico, Kathryn Nesbitt from the USA, and Neuza Back from Brazil, who will take part in the Qatar World Cup as assistant referees. The prior trio stand among the 36 head referees appointed, while the latter stand among a pool of 69 assistants.

“In this way, we clearly emphasize that it is quality that counts for us and not gender,” said Pierluigi Collina, chairman of the FIFA Referees Committee, in a statement released by FIFA when the referees were announced. “I would hope that in the future, the selection of elite women’s match officials for important men’s competitions will be perceived as something normal and no longer as sensational.”

The three women have a long history of officiating at high-profile matches, each a trailblazer in her own right.

Earlier this year, Rwanda’s Salima Mukansanga became one of the first women to referee at the African Cup of Nations since its inauguration 65 year ago. Japan’s Yamashita Yoshimi became the first to officiate a game in both the men’s AFC Champions League and the J1 League around the same time. Meanwhile, France’s Stephanie Frappart became the first woman to referee a major men’s European match and a French Ligue 1 match in 2019, and a UEFA Champions League match in 2020.

“They deserve to be at the FIFA World Cup because they constantly perform at a really high level, and that’s the important factor for us,” said Collina.

Selected based on their experience, skills, and form, women and men must pass the same rigorous fitness tests and performance standards to be selected as FIFA referees. They must also have a comprehensive knowledge of the game’s rules, with the referee identification and selection process for the World Cup lasting three years.

Despite countlessly proving themselves as equals in top games, female referees are often held at a higher standard than males. Gendered dynamics in sports force women to continuously “prove themselves” in order to gain the respect and recognition that men are sometimes granted by merely putting on the uniform.

Viewers, players, and coaches also often lambast their oversights in ways that men do not experience, and it has been happening ever since women began officiating men’s matches.

Mike Newell, an English football manager, went as far as publicly saying that “if you start bringing in women, you have big problems” when he perceived that an assistant referee had made the wrong decision over a penalty in a match with his team back in 2006.

In 2011, Sky Sports commentators Richard Keys and Andy Gray were sacked after recordings showed them making sexist comments about Premier League official Sian Massey and West Ham vice-chair Karren Brady. They thought their microphones were off when they said that women referees “don’t know the offside rule” along with  more derogatory comments.

The openly sexist attitudes and unfair criticism of women referees have long been documented. Today, women in the field still feel the same way.

“High profile male referees get decisions wrong all the time but you never hear comments about their gender, you just hear that they made a mistake,” said Bea, a referee, in a 2022 study highlighting the experiences of women involved in football as coaches and referees.

And while having female officials at the Qatar World Cup is a big step forward, it’s not nearly enough. Major barriers and societal obstacles still stand in the way of their success and wellbeing.

“Your place is in the kitchen, and not on a football field,” said John Cummings, a senior Football Association official, to a woman at a referee workshop event back in 2014.

“It’s nothing against you personally but all the time I’m alive, a woman will never referee in my league,” he added. Cummings was suspended for four months following his remarks.

Players, coaches, spectators, and officials are too comfortable with these common outbursts, indicative of deep-rooted misogyny that must be addressed before gender equality in sports can be achieved.

And while it’s exciting to see women referees represented at the Qatar World Cup, it also makes me worry when I think of the sexist remarks they’ll hear all throughout.