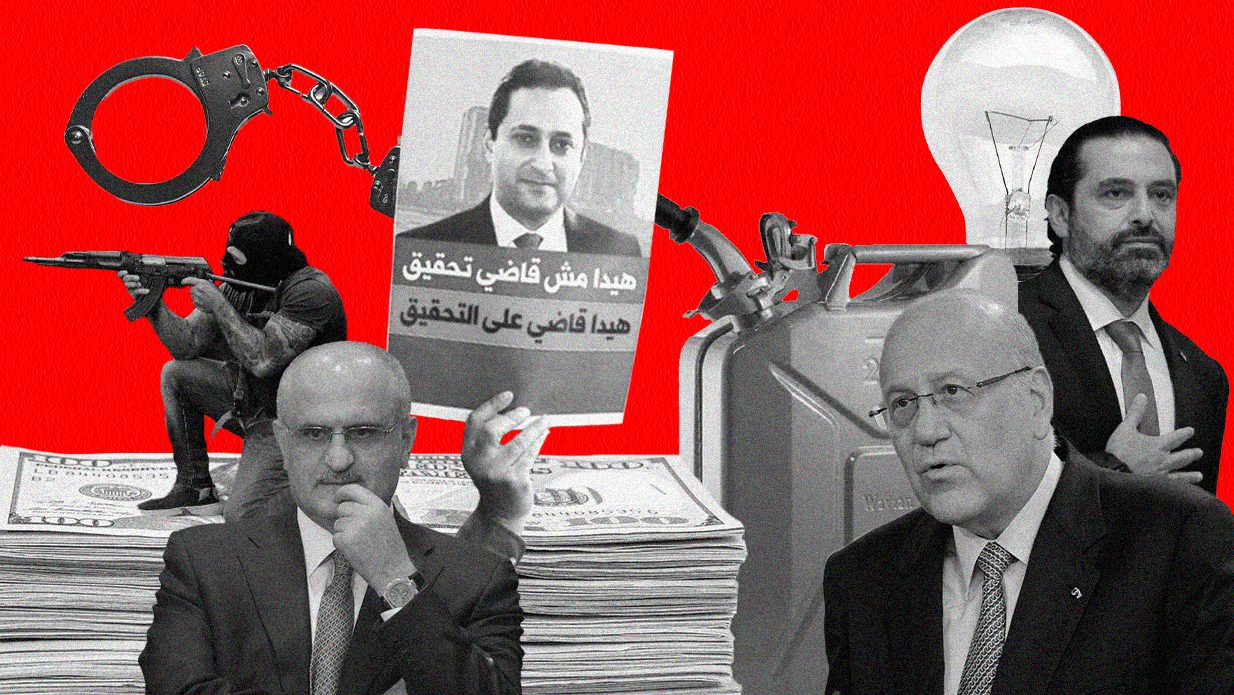 This past year has once again seen Lebanon battling tooth and nail to stay afloat in a sea of challenges and conflicts that marked 2021. We round up some of the year’s most memorable, and tragic, events:

The local currency, which has been in freefall against the dollar since October 2019, reached a new low this year. It began trading at LBP 29,000 for every one dollar in December.

The Lebanese lira lost more than 95 percent of its purchasing power, and UN figures show that around 75 percent of the local population is currently living in multidimensional poverty—and 36 percent living in extreme poverty.

A not-so-new government is finally formed

On July 15, ex-Premier-designate Saad Hariri stepped down from his position after being appointed in October 2020. Hariri and Aoun’s various disagreements over which political parties will control what ministries prevented the formation of a government.

On July 26, ex-Premier and Lebanese billionaire Najib Mikati was named PM-designate. He became prime minister for the third time in his political career on September 10, when a Lebanese government was officially formed and approved by senior politicians.

Following a request from ex-ministers Ghazi Zeaiter and Ali Hassan Khalil, Judge Fadi Sawan was removed from the Beirut blast case on February 18.

Consequently, Judge Tarek Bitar was appointed to the case. Since then, he has faced multiple roadblocks in the investigation due to lack of cooperation by ex-government officials who refuse to undergo investigation in their ties to the blast. Such ministers include Nohad Machnouk, Ali Hassan Khalil, and Hassan Diab.

Oil spill in the Mediterranean, black tar in South

The 2021 Mediterranean oil spill was declared an “ecological disaster,” which caused clumps of black tar to wash up along the Southern coast of Lebanon. The spill contaminated beaches from Naqoura to Tyre, including a nesting site for turtles.

An outstanding number of social media personalities, activists, and journalists were called in for investigation over small and often illegitimate claims such as insulting the presidency or public institutions.

Comedian Shaden Fakih received a trial date at the Military Court—where civilians should not go on trial—for “harming the reputation of the Internal Security Forces” through a video where she called the ISF asking if she would be able to go out to pick up sanitary pads during the COVID-19 lockdown.

Others recently called in for investigation by security forces include Karim Saffiedine, Toufic Braidi (Toufliuk), and Nada Homs.

The Pandora Papers was a large-scale investigation launched by more than 600 journalists and 150 news outlets worldwide. It uncovered the offshore accounts and hidden wealth of more than 330 politicians and 35 current and former world leaders across the world.

The files showed that Lebanese officials, including politicians, bankers, and businessmen ranked high in terms of the number of offshore accounts they own. While offshore accounts may not necessarily indicate any wrong-doing, the papers name current Prime Minister Najib Mikati, ex-PM Hassan Diab, and BDL Governor Riad Salameh amongst others.

One year passes since the Beirut blast

The one-year mark since the Beirut blast passed in August, which culminated in huge marches and protests across the capital Beirut.

The investigation into the blast has yet to yield any productive results, as officials and politicians constantly find ways to thwart the investigation by failing to attend investigations or by filing complaints against Judge Tarek Bitar.

MP Inaya Ezzeddine put forward a proposal to implement a women’s quota in parliament and in electoral lists ahead of the 2022 General Election during a session of the Joint Parliamentary Committees, only to be shut down.

Deputy Speaker Elie Ferzli dismissed Ezzeddine’s proposal under the pretense that they were “running short on time” and “cannot discuss these new details.”

The proposal was not passed.

Amidst this past year’s shortage of fuel and diesel, many electricity stations were forced to shut down due to inability to generate electricity, plunging rural areas and cities into complete darkness.

This past year’s shortage of fuel also led to severe rationing amongst citizens, who had to wait for hours in queues over the duration of the summer to fill up on a bit of gas. Many had to camp out in their cars overnight in hopes of filling fuel up in the morning.

This caused multiple conflicts, including armed ones involving guns and knives. An RPG was also fired on a gas station by a man because they refused to fill up his car after claiming they had no fuel.

On October 14, members of Hezbollah and the Amal Movement clashed with the Lebanese Armed Forces, resulting in the death of seven people and the injury of 32 others.

Lebanon was caught in a political spat with Gulf countries, primarily Saudi Arabia, after ex-Information Minister George Kordahi made comments on the Saudi-Yemen war.

In August 2021, a fuel tanker in Akkar exploded, causing the death of at least 33 people and wounding at least 79. The fuel tanker contained several liters of fuel, hidden by a businessman from the region, and may have been intended to be smuggled to Syria or sold on the black market.

Lebanon was in the midst of a terrible fuel crisis, which forced individuals to ration fuel and wait for hours in line to fill up their vehicles.

When the tanker was discovered, the army seized it and began distributing it to residents who rushed to secure fuel. Why the tanker exploded remains unclear, with accounts suggesting either a fight that led to a gunshot hitting the tanker or a lighter causing the blast.