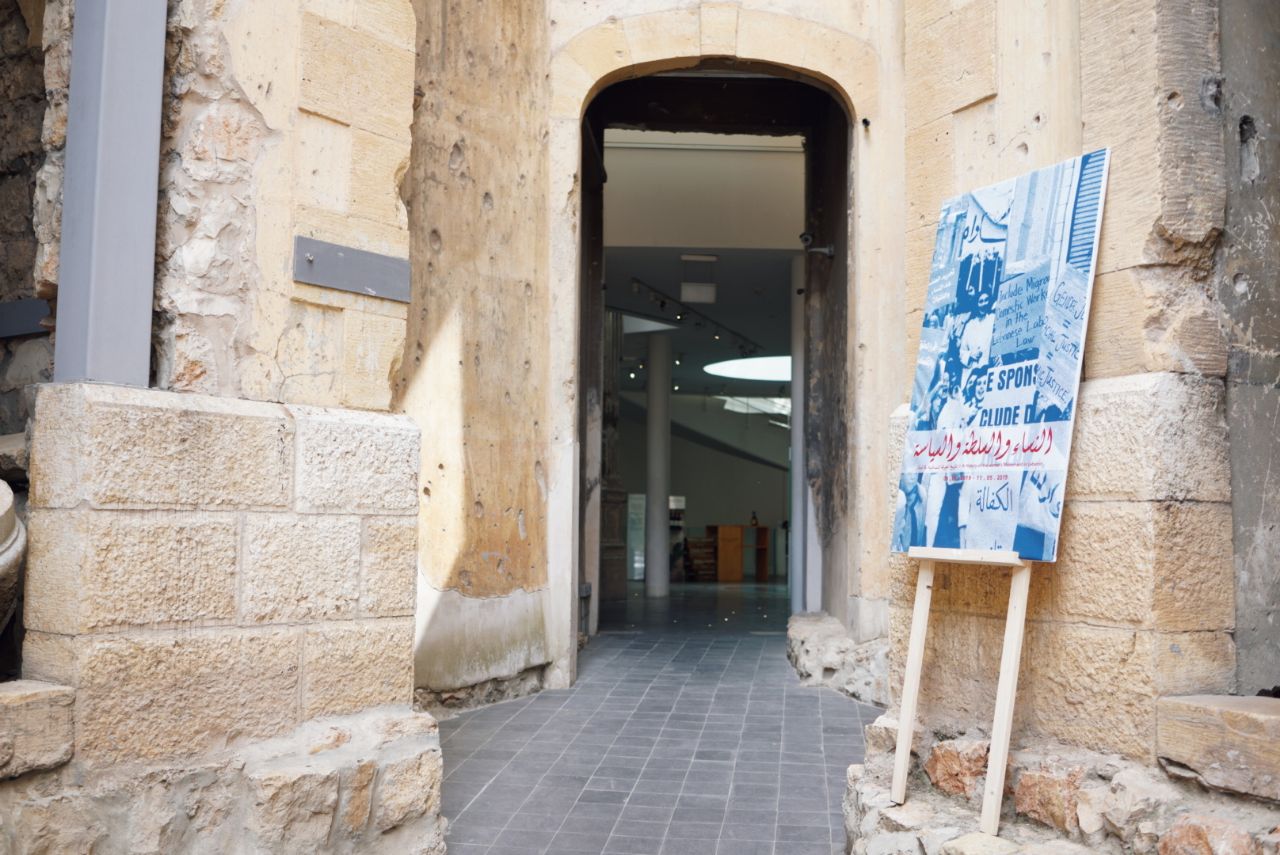 The entrance to Beit Beirut, which currently houses an exhibition that accompanied the launch of the timeline on the women's movement in Lebanon. (Laudy Issa)
Home
Community Voices
Activism

When Linda Mattar ran for the 1996 parliamentary elections in Lebanon, she knew she would not be elected despite having more than 40 years of experience in the public sphere. She lobbied against discriminatory laws throughout her career, having worked at silk factories in her youth and witnessed the unequal treatment of women in the industry. She would go on to avidly fight for women’s rights, involved in leading organisations like the League for Lebanese Women’s Rights and the Women’s International Democratic Federation. She also represented Lebanon in around 60 international conferences.

“I ran because it was my duty to run, but I knew I wouldn’t win because I did not have the toolkit,” said Linda Mattar to Lebanon Support in March 2018. “No one in my family was involved in politics, not my father nor my brother or husband, which left me without a backbone. To this day, this hasn’t changed much, wasta plays a role.”

“To this day, this hasn’t changed much, wasta plays a role.” –Linda Mattar

Her forty years of experience meant nothing, even more so because she is a woman in politics. Today, more than two decades later, what happened to her still resonates. The Lebanese Parliament currently has six women in it. Despite political parties normalizing rape culture and the negative stereotypes surrounding women that one fifth of the Lebanese population believes in, the women’s movement in Lebanon has come a long way.

But we’ve built up a movement on the works of women who have been forgotten or purposefully ignored by Lebanese history books. For over a hundred years, women like Linda Mattar have willingly put up with the ridicule, the belittling, and the pushback from the public to advocate for women’s rights in Lebanon. And they have been forgotten.

Hivos, an international aid organization, launched a timeline on the history of the women’s movement in Lebanon on May 9 to remember these women. Available to all in both Arabic and English, the digital timeline pays tribute to leaders of the feminist movement starting 1906 and is open to additional historical contributions from the public.

An ongoing three-day exhibition at Beit Beirut also accompanied the timeline, which was created by Hivos Lebanon’s Women Empowered For Leadership (WE4L) program in partnership with Lebanon Support, and URIKA marketing agency.

“Art has always been at the forefront of telling our history and continues to be used to do the same with this exhibition,” said Mira Bouchmouny, WE4L Lebanon’s program coordinator, at the timeline launch. “We imagine, work towards and build on what we can effectively see.”

“We imagine, work towards and build on what we can effectively see.” –Mira Bouchmouny

The timeline provides a much-needed and previously-missing resource on equal rights and the history of the women’s movement in Lebanon by making the names and histories of female leaders from 1906 until today available, in addition to tracking the trends, focus points, and key victories of feminism over the years.

Skimming through the timeline shows that feminist causes, however, don’t exist in their own separate spaces. They naturally intersect with the nationalist causes as well. The Hivos timeline highlights women and feminist initiatives that played key roles in fighting economic injustices, standing up to the French Mandate, pushing for the Palestinian cause through feminism, and creating safe spaces for all among other things.

Women, like Linda Mattar, have largely been ignored or trivialised through Lebanese history. The timeline honours these female leaders, from politicians and journalists to scientists and civil society organisers. By rereading history through a feminist lens, we come to understand the world a little bit more. The timeline allows us to see how gender inequality throughout history shaped our modern world. And it allows us to judge just how much –or how little– we’ve moved forward.