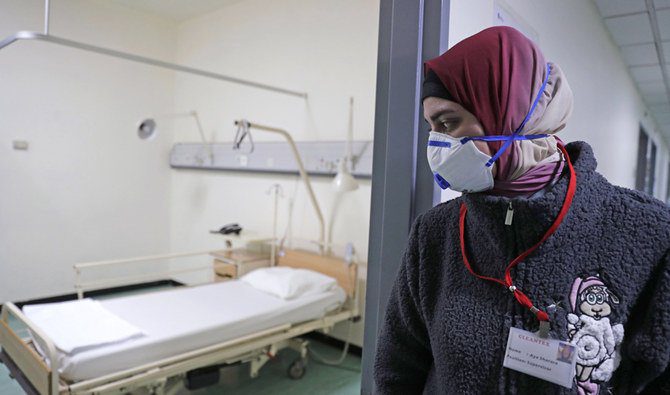 An employee wearing a protective mask near the ward where the first coronavirus case in Lebanon is being treated, at the Rafik Hariri University Hospital. (AFP / Arab News)
Home
Better Living

Lebanon on Monday said flights to and from coronavirus infested countries were reduced as part of the new measures taken by the government to prevent the spread of coronavirus in the country.

A report from a cabinet meeting, headed by Lebanese Prime Minister Hassan Diab yesterday, said that “unprecedented measures have been introduced at the Rafik Hariri International Airport and at all border crossings. The number of flights from and to countries with the virus outbreak has been reduced.”

Health Minister Dr. Hamad Hassan also stressed that additional measures have been taken with Iranian and Italian planes, to ensure that the virus does not spread.

“The measures and procedures have been directly coordinated with the World Health Organization,” Hassan said, following a briefing with President Michel Aoun on the coronavirus developments.

Earlier Monday, Hassan called on the Lebanese to trust the measures taken in coordination with the World Health Organization, to prevent the spread of coronavirus, and on the civil society to cooperate to refute rumors and fake news circulating around it.

Despite the efforts being taken, citizens are concerned with whether Lebanon can handle an outbreak of coronavirus as it is already grappling with its worst financial crisis in decades.

The World Health Organisation Director General, Tedros Adhanom Ghebreyesus, has warned that the “window of opportunity is narrowing, so we need to act quickly before it closes completely.”

New measures are being taken to combat coronavirus in Lebanon. Before asking whether or not Lebanon is ready for an outbreak, we have to ask whether or not the Lebanese health sector is ready to face the ongoing economic crisis.

Many in Lebanon can’t afford their medical fees

When anti-government protests erupted four months ago, Dr. Alain Sabri and a team of doctors, nurses, and emergency personnel from the Lebanese American University, the American University of Beirut, and various other hospitals in Lebanon joined efforts to set up a first aid tent that provides the necessary care for wounded protesters.

A larger group of doctors has also started working on influencing intermediate and long-term healthcare policies in Lebanon, also setting up various dispensaries across the country to help the needy.

“A lot of us [doctors] were not aware,” Dr. Sabri, who is the chairman of the Department of Otolaryngology at the LAU School of Medicine, told Beirut Today. “We treated so many people, particularly young men with a high blood pressure of 240/120 or 140 –blood pressures I’ve never seen before.”

In November, the World Bank shared that the poverty rate in Lebanon could rise from one-third of the population to around half. Costs of living are skyrocketing. Many have either lost their jobs or have seen their salaries slashed in half. Youth unemployment continues to plague Lebanon.

“Some of them are young and don’t have money to buy medication,” Dr. Sabri reflected on the patients his department has met in the past few months. “We are seeing lots of patients, with all kinds of problems, who need a lot of care. Many can’t even afford LL 10,000 medication.”

LAUMC-RH and the LAU School of Medicine launched its “Act of Compassion” campaign to help those who can’t afford medical care. Since February 1, the healthcare experts involved have provided patients with low-cost consultations every Saturday at their outpatient department. Patients can come in and seek the help of medical experts for LL 10,000 only every Saturday –an incredibly reduced fee when considering hospital costs in Lebanon.

The campaign has also distributed clothes, adult diapers, and medication to elderly residents of needy care-centers.

Sleimain Haroun, director general of Haroun Hospital and president of the Syndicate of Hospitals in Lebanon, told reporters that the syndicate asked PM Hassan Diab to increase the budget of the Health Ministry so that it can cover the treatment of patients who lost their access to health coverage.

“Fifteen thousand people in the private sector lost their jobs and were registered with the social security services,” said Haroun after the Monday meeting with Diab. Right now, between 120,000 and 130,000 citizens do not have health coverage.

The syndicate delegation also discussed the problems their organizations are facing in obtaining internationally-produced medical supplies.

The dollar crisis and its effect on medical supplies

The government must be proactive –rather than reactive– in solving the issues faced by the health sector.

For importers of medical equipment, supplies and medicines, the process has become increasingly difficult and expensive. Businesses that import supplies need dollars to complete their purchases, but have no access to them because of capital control measures imposed by banks. Business owners cannot withdraw dollars, or complete online payments to international suppliers. Pharmacy and hospital owners are no exception.

“So far, we haven’t run out of equipment,” said Dr. Sabri. “If medications are rare they are likely not in stock, but there is always an alternative medication available. The situation is not critical yet.”

That doesn’t mean it’s not already a problem, or that the government should wait any longer to solve it. Medications running out or being limited to a select and privileged few has life-ending consequences. The government must be proactive –rather than reactive– in solving the issues faced by the health sector.

“So many things are missing in stock,” Abed Labban, a pharmacist in Verdun, told Beirut Today.

After his meeting with President Michel Aoun at Baabda Palace, Public Health Minister Dr. Hamad Hassan suggested that medical supplies that limit the spread of coronavirus are available in Lebanon but “there are those who monopolize these supplies, which is immoral and illegal and entails legal prosecution.”

Regarding imported medicine, the minister insisted that Aoun and Diab “consider that the issue of medicine and medical supplies is a redline and there is no default towards imported pharmaceutical institutions or the Association of Drug Importers and importers of medical supplies.”

Despite saying otherwise, Lebanese officials have yet to provide evidence that “the health sector is a redline for all.”

Human Rights Watch indicated that the government failed to reimburse private and public hospitals for providing medical services to patients covered by social security and military health accounts. Warnings of medical shortages are on the horizon. The increasing poverty rates signal that everyday citizens cannot afford hospitals and medical care.