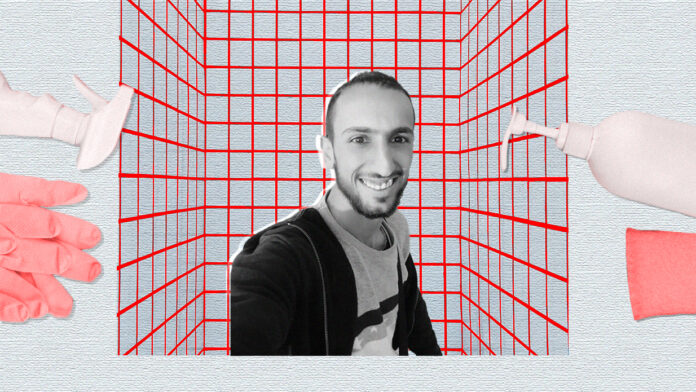 Because it disrupts norms and traditions, some may consider Mohanad Mahmoud’s work to be shameful. With strong will and a lot of courage, the young man broke into a career that is often reserved for women in Lebanon: He cleans houses.

Taboos and gender expectations made it difficult for Mohanad, but he still won over house owners into providing him with cleaning jobs. “Work is nothing to be ashamed of,” he said. “We can all clean houses and I can help.”

Mohanad Mahmoud is a Syrian refugee born in 2001. He moved, alongside his family, to Lebanon fleeing the airstrikes targeting the Yarmouk camp in Damascus. He lost a brother in 2012—in the early days of the Syrian war.

The Mahmoud family arrived in Lebanon in 2015, and stayed in an old abandoned building in Bhamdoun that was bombed during the Lebanese civil war.

He was still a teenager when suffocating economic conditions forced Mohanad to drop out from school at the age of 15 and take up a job at a local supermarket. He worked to help put food on the table for his father, mother, and four siblings.

He was later introduced to a whole new community through working at Alsakhra Hotel, but eventually left his seasonal job there in pursuit of a better life for himself and his family. Mohanad began paving another path for himself through house cleaning.

“In my work between Bhamdoun and Beirut, I met a lot of Lebanese people I am proud of. They treated me nicely, and opened up their homes to me,” he said. “When I go into their homes to clean, I imagine that I am entering my own home, and so I clean their houses as if they were my own. I take care of all their belongings, and I like to adjust their decor so it becomes prettier and livelier.”

Mohanad dreams of an education

“I used to dream of staying in school to complete my education, and learning how to draw because I am so passionate about it,” said Mohanad.

The 20-year-old says he does not remember Syria well and considers Lebanon to be a second home. “Now I find myself mourning Lebanon because of all the crises it is going through,” he said with a lump in his throat, breaking from his typically upbeat attitude.

“It’s become like my own country, and now I only care about staying with my parents, financially supporting them, and securing a future for myself.”

His top priority is to gather enough money to visit his siblings in Syria and return to Lebanon. “I have a brother I haven’t seen in nine years, and I yearn to see the village where I grew up,” he said.

Mohanad’s ambitions may someday become reality. He works towards achieving them, but is struggling with a medical issue that has plagued him since birth: He only has one kidney, and suffers from massive pain if he does not pay attention to what he eats.

His pain is amplified by Lebanon’s medical crisis, as specialized medication is missing from the market or being sold at dangerously unaffordable prices.

Mohanad, whose smile never falters, said he is at ease with living with only one kidney. He pays close attention to what he eats and endures the pain—as his doctor warned him that he may have to start dialysis if he doesn’t take care of himself.

He cleans houses and is good at it

Eight thousand dollars is too large a figure, given what Mohanad makes as a housekeeper. He earns LBP 20,000 for every hour of work—which currently equates to less than a dollar.

Compared to other housekeepers, the cost for his services is low. But the people who employ him say there is no one quite as good as him. He is quick, hard-working and uses tools to pick apart items and clean them well.

“Mohanad is a polite boy. When I first met him, I let go of all my previous housekeepers to employ him,” Majida H., a homeowner, told Beirut Today. “He is always happy, knows exactly how to clean the house, and has so much experience in this job.”

Majida says she deeply trusts Mohanad, “He knows the house so well now and quickly figured out where everything goes. He’s a trustworthy person.”

But his career took a toll on his personal life

The homeowners who employ Mohanad think highly and positively of him, but it’s the complete opposite with his friends.

“When I started working as a housekeeper, a lot of my friends abandoned me because they were embarrassed by me. I lost all my friends,” said Mohanad.

“Everyone runs away from me because of the job I have,” he added. “My personality isn’t good enough to meet girls and when I try to become friends with girls, they often refuse because I don’t speak a foreign language and work as a housekeeper.”

He did have a relationship that lasted around a year but also ended because of his work. “She was sweet, and I loved her so much but when she found out I work as a housekeeper, she left me. It made me so angry when she called me a house servant. I didn’t respond and left.”

Mohanad is one of the 2.5 million children who were removed from the educational system as a result of the war in Syria, which has also caused the forced displacement of around 5.7 million individuals into neighboring countries, the internal displacement of more than 6 million, and the death of more than half a million people.

Despite what life has thrown in his direction and having a long way to go before achieving his dreams, Mohanad never lost his positive attitude. He takes pride in what he does despite what others say, and describes cleaning homes as a “noble career” and a lot of “hard work.”