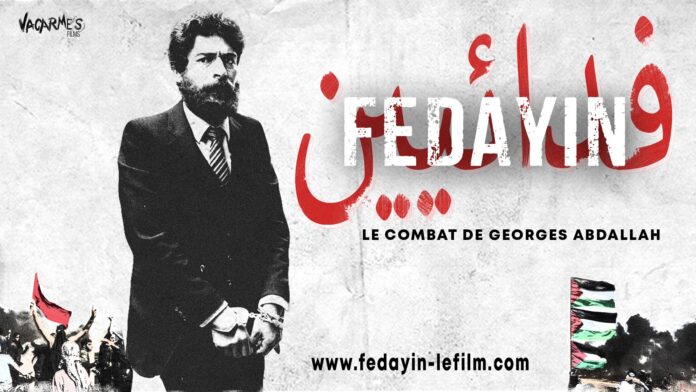 A momentum has been on the rise in the past months with growing support in Europe following the release of the documentary film Fedayin: Le combat de Georges Abdallah.

Calling for the freedom of the longest-held political prisoner in Europe, the film was screened this weekend in both Beirut—including in several Palestinian camps—and a number of European capitals to commemorate the 37th anniversary of George Abdallah’s imprisonment and rally international support. Abdallah still languishes in prison despite being eligible for release since 1999.

A strong believer of and fighter for the Palestinian cause, George Abdallah was part of an armed struggle that spanned throughout the Lebanese civil war. The film traces back his life as the head of the Lebanese Armed Revolutionary Factions and after moving his operations to France, where he was found guilty and sentenced to life in prison in 1984 for the murder of a US military attaché and Israeli diplomat in Paris.

The film draws on testimonies from former political prisoner, refugees, scholars, and activists from the “Samidoun,” a Palestinian Prisoner Solidarity Organization spearheading this international campaign.

The weakness of the film is its failure to showcase Abdallah’s struggle as being an integral part of a larger sum that included left-wing parties and pan-Arabists that came together under the Lebanese National Movement (LNM) in support of the Palestinian Liberation Organization (PLO). Instead, he was portrayed through an individualist lens that overlooked a crucial period of the Lebanese civil war and a collective identity for which Abdallah, and many others, had sworn allegiance to.

A recurring theme in the film was the overacting sense of abandonment conveyed in the testimonials of Palestinian refugees, as they were let down by neighboring Arab nations, including Jordan and Lebanon.

The documentary, however, fails to bring into light a counter perspective with speakers who would paint a more holistic picture of the Palestinian armed resistance in Jordan and the nationwide critique of the role it is thought to have played in the Lebanese civil war, leading up to the Israeli invasion of Lebanon and the destruction of a nation.

Of the stark testimonies from the film was that of Palestine refugee, Mohammaed Khatib, who gives a rather misleading view of how the Palestine Liberation Organization was driven out of Lebanon in what was characterized as a shocking defeat suffered as a result of “Lebanese factions fighting each other”—in effect, whitewashing the role Palestinian factions had played in the Lebanese civil war or the historic events that led up to that defeat.

The Palestinian armed struggle in the film was unrightfully sanitized in a blatant attempt to gloss over historical facts, giving an unbalanced view of the war in the lead up to the rise and fall of Lebanese support for the Palestinian cause and movement.

To better commemorate George Abdallah was to portray his struggle as part of a collective identity that drew in Lebanese factions from different ideological backgrounds, fierceful enough to cut across the sectarian divide.

The aim of the film is not about examining the history of the Lebanese civil war, but the film could have made a stronger case to the international community. It could have transcended George Abdallah to rally support for the hundreds of political prisoners who went down the same path. Instead, it was trapped in a limited scope that failed to paint the Abdallah’s armed struggle as part of a sum and plastered over the role LNM had played in support of the Palestinian cause.

Putting aside the intended goal of the film in advocating for George Abdallah’s release, the documentary throws a fresh spotlight on the ethics of political struggle and puts the question of the legitimacy of armed resistance against Israeli occupation back into the Arab discourse.

It also raises questions as to whether the West truly upholds the same legal and international standards when it comes to “violations” or “war crimes” committed by their troops on foreign soil. Take France’s denial of human rights violations committed in Mali following a UN investigation that clearly stated the country’s involvement in killing innocent citizens in a military airstrike.

It points to the double standards Western countries hold and the impunity they exercise when being complicit in violation of international humanitarian and human rights law. It is always the reaction and not the action that gets criminalized. That is not to condone violence or vindicate any “terrorist” act, but there’s something to be said about enacting justice only in the context of Us vs. Them.

The film surely offers a preview that maps out the grounds for how political struggle of a rightful cause manifests itself in George Abdallah and others.