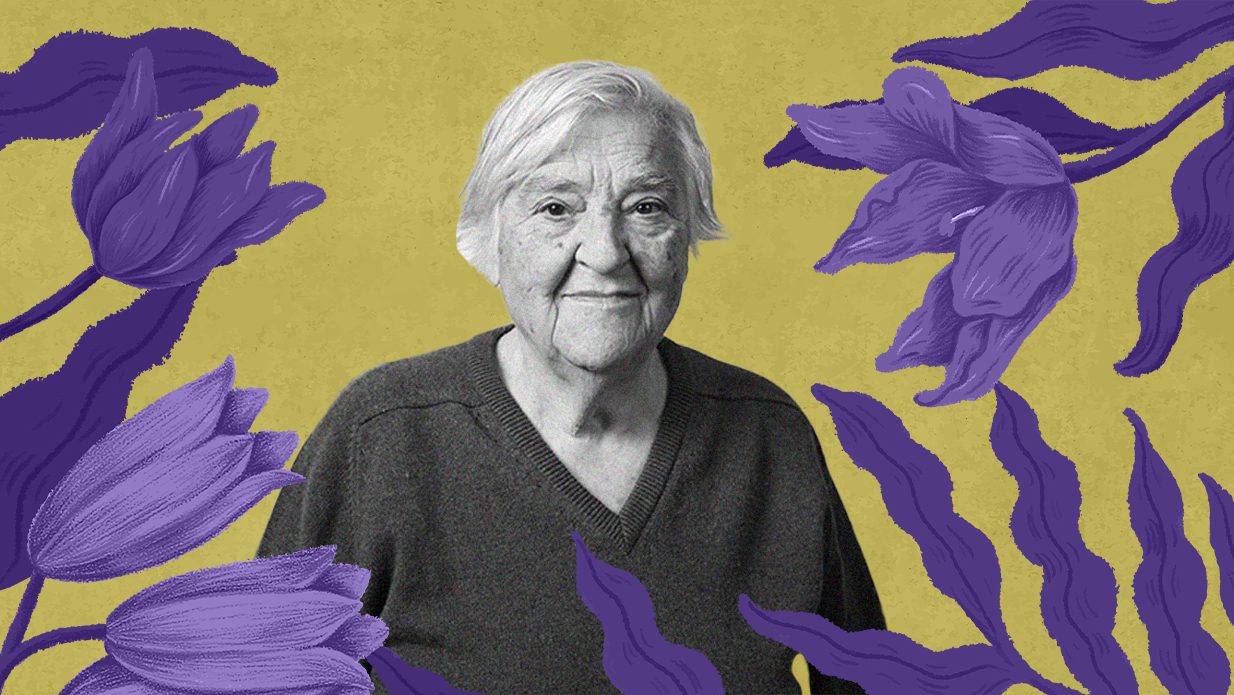 Influential and renowned Lebanese-American author, poet and painter Etel Adnan died Sunday in Paris at the age of 96.

Adnan was born in 1925 in Beirut, Lebanon to mother Rose “Lily” Lacorte and father Assaf Kadri. The poet grew up speaking Greek and Turkish in a predominantly Arab-speaking society, with a Greek Orthodox mother from Smyrna (currently known as Izmir, Turkey) and a Sunni Muslim father who was a high-ranking Ottoman officer born in Damascus.

She was just seven years old in 1932 when her father changed the family’s surname to Adnan. On previous occasion, Adnan had said that she grew up with “people who were defeated when they were still young,” even stating that by the time her father was 40, he was “an unemployable man.”

In 1949 and at the age of 24, Adnan moved to Paris to pursue a degree in philosophy at the Sorbonne on a scholarship. She continued her graduate studies at the University of California, Berkeley and then Harvard University.

After the pursuit of her studies, she began to teach the philosophy of art at the Dominican University of California in San Rafael between 1958 and 1972.

“The head of the art department wondered how I can teach such a course without practicing painting,” she told The Paris Review Daily. “She gave me crayons and bits of paper, and I started doing little works, and she said I didn’t need any training, that I was a painter. So I kept going.”

In 1959 and at the age of 34, Adnan began to paint. Her earliest abstract works “were created using a palette knife to apply oil paint onto the canvas—often directly from the tube—in firm swipes across the picture’s surface.” She’s often stated that the focus of her work is almost always the “immediate beauty of colour.”

At the end of 1972, Adnan returned to Lebanon and began to work as a journalist and cultural editor for Al-Safa Newspaper. It is then that she met Simone Fattal, an artist also residing in Beirut who would go on to become Adnan’s longtime partner.

When the civil war broke out in 1975, she and Fattal fled to Paris. During her time there, she wrote her widely acclaimed “Sitt Marie Rose,” a story originally published in French that details a kidnapping during the war from the perspective of the civilians enduring brutal political conflict. Today, it is considered a classic of war literature and has since been translated into ten languages, as well as been incorporated into curriculums in American classrooms.

Due to its “controversial political undertones,” it would be many years before the novel was available in Lebanese bookstores.

At the end of the 1970s, Adnan returned to California to reside in Sausalito, in the Bay Area. Her view of Mount Tamalpais, northwest of San Francisco, would become a recurring inspiration and element in her art, as she repeatedly rendered the mountain into her abstract oil paintings.

While Adnan had been an active painter for many years, she only began to gain recognition from the international art community in her 80s, when her paintings were featured in a 2012 contemporary art exhibition Documenta 13 in Kassel, Germany.

It was also in her later years that Adnan would begin to openly identify as a lesbian, shaking the Arab World where homosexuality is still widely and legally considered a taboo.

From then on, her work would go on to appear in numerous international exhibitions and art fairs, including the Whitney Biennial in New York. Currently, her final exhibition “Etel Adnan: Light’s New Measure” is on display at the famous Guggenheim Museum in Manhattan.

She drew attention for her leporellos, which are books folded like an accordion containing a mosaic of drawings, splashes of colour, and Arabic words and numbers. The screens can be “extended in space like free-standing drawings.”

She began combining Arabic calligraphy into her artworks and books in the 1960s. She did so by spending numerous hours copying words from an Arabic grammar book, without even trying to understand the meaning behind the words.

She continued to consider herself “a Californian artist,” even while she lived out her last few years in Paris. Alongside her art, she widely considered herself an “American poet,” as she began to write verse as an act of opposition to the Vietnam War. She wrote numerous collections of poetry, the last of which was “Shifting the Silence,” published in October 2020.

Adnan is survived by her longtime partner, Simone Fattal.