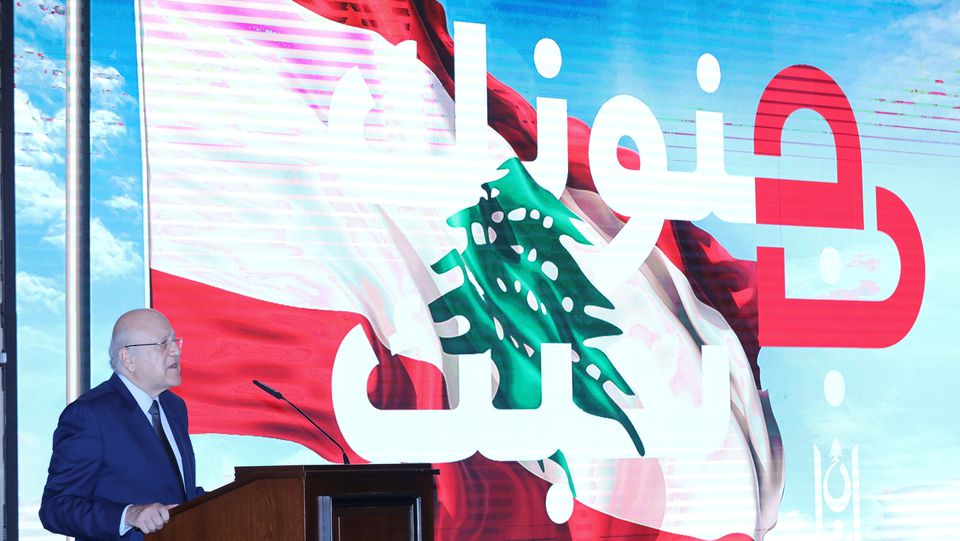 Lebanon's Prime Minister stands near "We love you in your madness" slogan on November 4, 2021. (Photo: Dalati & Nohra)
Home
Better Living

Under the slogan of “I love you in your madness,” Lebanon’s tourism ministry has launched a new campaign to rejuvenate the tourism industry in the crisis-stricken country.

“This will be our touristic identity that the world will see,” said Tourism Minister Walid Nassar in a news conference with other senior ministers in Beirut.

The country is currently battling an unsurpassed economic meltdown, with the World Bank labelling it as one of the top three deepest financial depressions since the mid-eighteenth century. The new campaign has been met with some criticism for portraying the instability in Lebanon as a point of pride.

The campaign was launched by Dubai-based advertising company TBWA and was developed cost-free. According to Chief Creative Officer Walid Kanaan, marketing a country on the constant brink of total collapse was a “near impossible” task.

“This is our country, a crazy country…crazy in its nightlife, crazy in its food and generosity. And no matter how crazy the situation in Lebanon is, we can only say, we love you in your madness,” he said.

The slogan is taken from a famous song released by Lebanese icon Fairuz before the outbreak of the Civil War in 1975.

The official English translation will be “a crazy love,” and the catchphrase will be displayed on Lebanon’s national Middle East Airlines carrier and through social media campaigns.

Lebanon has historically attracted many tourists due to its strategic location on the Mediterranean and its beautiful landscapes, coupled with great weather throughout the seasons. In recent years, the industry has struggled to attract newcomers to the country.

In 2018, some two million tourists visited the country, but official records show that the numbers fell to a few hundred thousand in 2020. This was the same year the world was battling the coronavirus pandemic head-on and Lebanon was in the beginning of its collapse.

Since 2020 and up until now, thousands of employees in the service industry have been laid off. Hundreds of restaurants and businesses have also shut down in the face of the unstable local currency, trading in 2019 at LBP 1,500 per dollar and currently in November 2021 at LBP 21,000 per dollar.

Prime Minister Najib Mikati pushed back against the campaign, saying “Lebanon is not mad… maybe the way it was managed led to that.”

Nassar responded to Mikati’s comments by saying the slogan was “bold, because Lebanese people go to extremes a lot.”