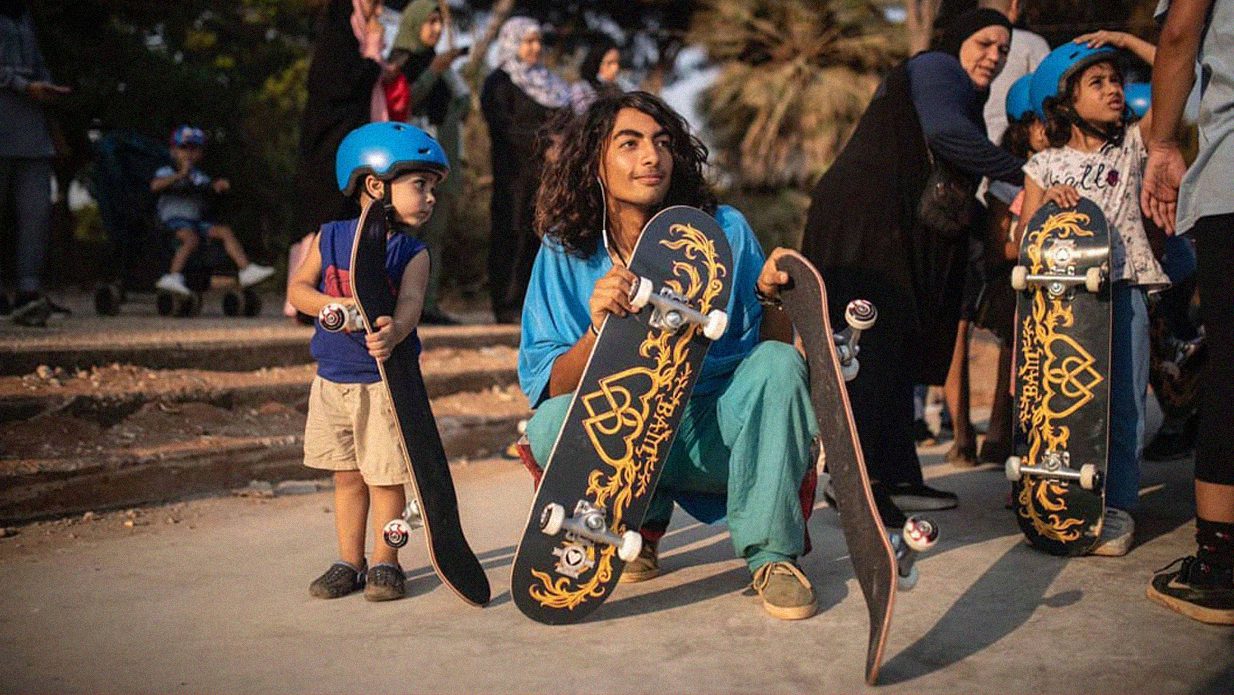 Snoubar Skatepark: A new haven for skaters (and more) in Lebanon

Lebanon’s largest public garden, Horsh Beirut, opened its gates in summer 2021 to welcome Beirut’s residents to its latest—and most surprising—addition: the Snoubar Skatepark.

A concrete jungle of ramps encompasses one corner of the garden, drawing together an odd mix of strangers to enjoy what little public space is left in the city. Parents bring their children for minor lessons in skating, teenagers and adults alike come to practice their hobbies, and refugee children chase each other in a cacophony of laughs and games. Some want to learn skating, so they ask the skaters there for short turns on their boards—and try hard not to wipe out on the concrete as they ride.

For new visitors of the park, it feels almost surreal for Lebanon to have such a space.

“It felt like a cool haven for a few days for us before reality hit again,” said Karl Bou-Rjeily, who recalls feeling like he wasn’t even in Lebanon while visiting the park recently for a filming expedition.

The skatepark is part of a collaborative effort between international non-governmental organization Make Life Skate Life and the Beirut municipality “to build and sustain a free-of-charge community skatepark at the urban park Horsh in the center of Beirut. The project addresses underprivileged youth in Beirut to contribute towards increasing their resilience and psycho-social well-being through skateboarding.”

Beirut is infamous for its lack of public spaces, and specifically, green spaces and gardens that welcome residents for a small breather from the city’s chaos and congestion.

Similarly, many skateparks have popped up across the country but few to none have survived. “In Lebanon, there have been many skateparks: 360 skatepark in Dbayeh, Gilbert Skatepark, and this one in Tripoli, but it’s very bad,” said Mostafa Nazer, a local skater who has been on boards for 16 years of his life.

Snoubar Skatepark is built by skaters for skaters. “Design-wise, the park is beautiful. We’ve been waiting for it for a really long time.”

One of few communal spaces

“It was shocking to realize how little public space is available in Beirut and how, even when those few spaces are public, they are still restricted and not accessible to most people,” said Arne Hillerns, Founder and Executive Director of Make Life Skate Life.

“I think this is a wrong approach and that there needs to be change in the exploitation of those spaces,” he added. “I hope the skatepark can contribute in a small way and that the people in charge will make those changes and give back public space to the ones entitled to them—the people of Beirut.”

The skatepark came to fruition shortly after the Beirut blast on August 4, 2020. The NGO sought to help the Lebanese skater community and started a relief fund. According to Hillerns, “it was always clear to us that a skatepark in Beirut could contribute to the reconstruction of the city and offer a space to release stress and think of something different.”

The skatepark spans the length of 1150 square meters and cost just under 100 thousand dollars to build, without taking into account the funds needed for the long run such as programming activities. The main donor for the park was the Decathlon Foundation, which provided more than half of the budget for the project.

Hillerns says these funds are extremely low “considering the positive impact the skatepark is having on its users and the community.”

Collectively, a bunch of local helpers and volunteer builders came together to build the park without seeking any financial compensation for their efforts.

“At first, it was a great project,” said Mostafa Nazer. “All of us [the skating community] helped around with it.”

Before and during construction, Make Life Skate Life also partnered up with Just Childhood, an NGO that works with refugee youth in camps across Beirut.

“Together with Just Childhood, a group of local coaches offers free skate classes three times a week,” said Hillerns. “I think the classes really helped to provide a good start for the skatepark and immediately disclosed the social background of the project and that the skatepark really is for everyone.”

It’s not just skateboarders who are interested in skateparks. More than just sports facilities, spaces like Snoubar Skatepark can become vital communal spots for people of all ages and backgrounds.

“The park itself was really cool. I mean I saw a lot of people of all genders, different ages…great diversity there,” said Mohammad El Chammah, an urban planner and sports historian.

Nazer said that the management of the park was doing a wonderful job and making the experience incredibly enjoyable, until around a month ago.

He mentioned some visitors who came to the skatepark broke bottles and threw random rocks at skaters, in addition to others being threatened with knives.

“Sometimes you’d just be skating around, and someone would throw a rock at you,” added Nazer. Other reported incidents include theft of bags.

A few skaters suggested implementing an entrance fee of LBP 10,000, and the Beirut municipality expressed support for this decision. Nazer and his fellow skaters were not focused on gaining money out of the park, rather on ensuring the park remains safe for skaters who wish to visit it frequently.

No entrance fee was instated, since the ultimate goal of the park is to remain public and free for everyone to use. But Nazer says a lot of people have stopped frequenting the park lately because of these issues.

He says the only way to mitigate the issue is “with decent management and security.”

In contrast, Chammah finds that the main downfall of the park is the lack of access from multiple gates. “In terms of accessibility, it’s not that simple,” he said. “I just wish maybe the municipality or the designer might’ve thought that some people wanted to get in from the other side.”

As for Hillerns, he has bigger plans than just the Snoubar Skatepark.

“There is still an apparent lack of public space in Lebanon so it would definitely make sense to continue to build skateparks across the country. Also, there are a lot of skateboarders outside of Beirut that won’t get the chance to skate at the new skatepark,” he said.

“There are no plans for building a next skatepark in Lebanon but our organization would be more than happy to provide expertise or get involved if there was a need and demand.”

WATCH | For Profit, Not People: How Beirut Lost Its Public Green Spaces