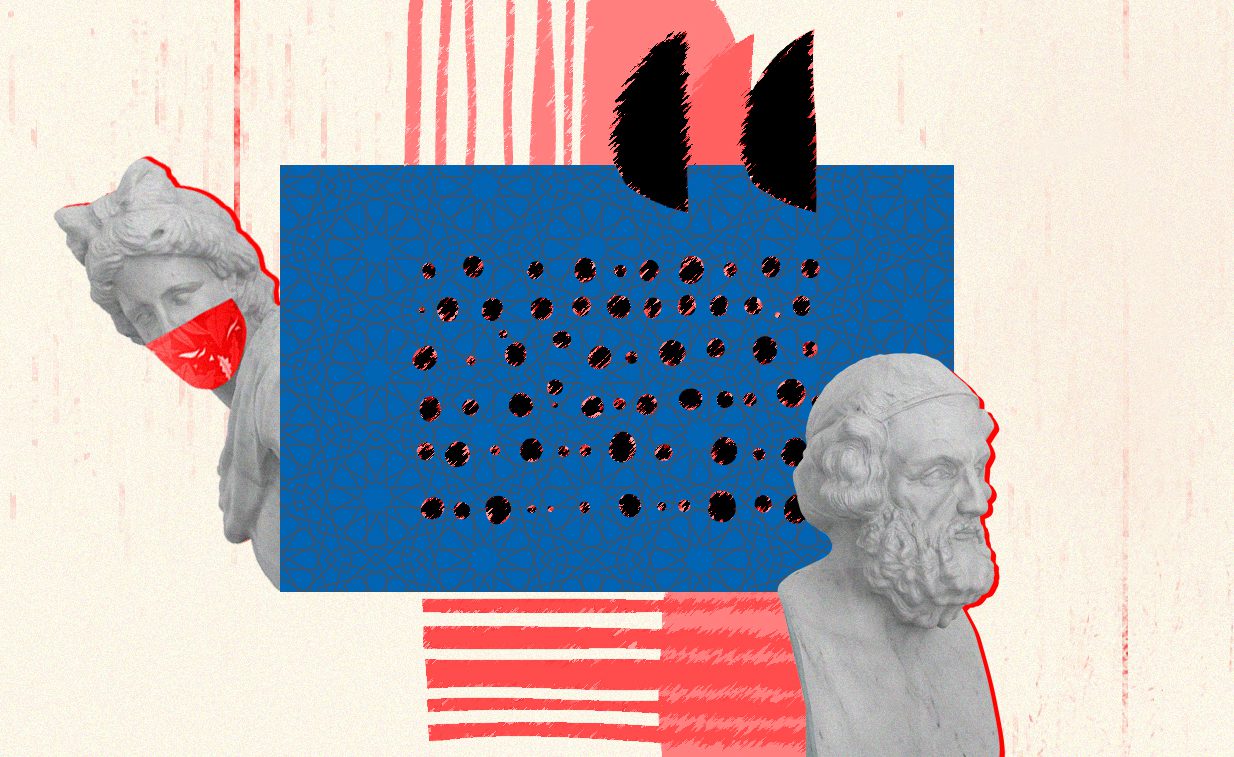 Sustaining art during the collapse: A case study in alternative structuring

On August 4, Beirut-based drag artist Sultana and fellow performers were preparing for a “Covid-safe” show, their first in five months. The unexpected government-imposed lockdown at the time forced them to cancel their rehearsals, which were set to start at 5 pm.

Around one hour later, the venue –along with kilometers of surrounding areas– was decimated by the explosion of 2,750 tons of ammonium nitrate improperly stored at the port of Beirut.

For over a year and a half, Lebanon has been suffering from unceasing challenges on all fronts. Recently, the World Bank described Lebanon as “sinking into one of the most severe global crises episodes” since the mid-nineteenth century.

With monthly warnings of total electricity blackouts ahead, fuel shortages leading citizens to long waiting lines at gas stations, a local currency that has lost close to 90 percent of its value and whose exchange rate is constantly in limbo, the Lebanese people are bearing the weight of a total economic collapse brought about by decades of corrupt governance.

The collapse was partly exacerbated by the COVID-19 pandemic, which hit merely five months after the October uprising of 2019. Since then, the country has witnessed arbitrary government-imposed lockdowns and an explosion that suspended Beirut’s economic activity.

As a result, venues across the city have had their doors shut for over a year now, cutting income drastically for artists and performers whose livelihood depends on these spaces. Rubbing salt into an open wound, the Beirut blast worsened the poor material conditions of these venues when the dangerous material at the port exploded so close to the densely-populated Mar Mikhael and Achrafieh areas.

The neighborhoods most impacted by the August 4 explosion housed many of the city’s well-known and underground cultural hubs, the latter of which were left more vulnerable. However, many global and local donors were quick to act.

A need for flexible funding that provides general support

The Lebanon Solidarity Fund was initially established by the Culture Resource and the Arab Fund for Arts and Culture (AFAC) in May 2020 to support arts and culture institutions amidst the economic meltdown and pandemic, which was paired with other difficulties, including investors having no access to their deposits in Lebanese banks.

For that reason, the aim of the fund was not to support any projects or initiatives. Rather, it aimed to provide general support and enable these organizations to retain their employees, fund operations, pay rent, and navigate other hardships, via a contextually-sensitive and easy application process. By the time acceptances were sent out on July 31, the fund would open again on August 10, one week after the blast.

“The difference between the first and second rounds was the urgency, which is why we launched [round two] as a fundraising campaign. We identified individuals first and considered them a priority over institutions,” Rima Mismar, Executive Director of AFAC, told Beirut Today.

Her organization, said Mismar, found itself in unfamiliar territory.

“We were not funding an arts project, we were providing humanitarian support. But at the same time, we couldn’t sit back and watch because we know there isn’t any public funding for these people,” she said.

The second round of the Lebanese Solidarity Fund was then opened to institutions and spaces five months later, allowing these entities to apply for support in one of three areas: reconstruction, programmatic, and institutional.

“These communities are the people who we serve as part of our grants for artistic projects, so if we’re not able to support them during such an exceptional situation, then we might as well lose their contributions to the arts and culture field,” said Mismar. “We wanted to make sure they could cover their medical bills, their house repair bills, and so on, without asking too many questions.”

Mismar stressed how important it was that the second round of the fund reach institutions outside Beirut, as part of a holistic country-wide rescue effort for the suffering arts and culture field.

Here to stay: A ravel of art and politics

Among the recipients of the Lebanon Solidarity Fund is Zoukak Theatre Company, whose work revolves around using theatre as a tool of reflection and subversion against marginalizing systems. The cultural group often produces politically-loaded work that challenges status quo ideals. This work, for Zoukak Program Coordinator Marianne Kortbani, is indispensable considering the state the country is in now.

“What value does our art have after an event like the port explosion?” she asked.

This question has become the crux of the company’s modus operandi, manifesting in initiatives like the Sundance Institute-funded To BEirut relief fund, a grant for practitioners in the performing arts.

In January 2021, the company closed its theatre and geared all of its activities towards supporting the performing arts community through mentorship programs for both established artists (Zoukak’s Mentorship Program) and younger artists (Generation Z Mentorship Program), free workshops, and open drama therapy sessions.

“We cannot imagine this field will disappear. The artists’ work is so intertwined with the sociopolitical context,” said Kortbani.

“I don’t think there is any institution thinking about moving its headquarters to another country. Even artists who are moving outside the country will continue working on the same subjects,” she added. “You just can’t not be influenced by the very specific context that we live in. We don’t have a choice but to stay… We’ll find ways to make it work.”

Those ways, Kortbani insists, entail collaboration among practitioners and institutions in the field, and forming an organized front outside the reach and scope of the government that has long been impeding their work. That means unionizing and building an organized structure of individuals willing to support the field and uphold its values of artistic expression.

“Who’s in the [Syndicate of Professional Artists] anyway? We don’t know them! We’re so separated from the state,” said the program coordinator. “Everything that the government does only makes our job harder, from artist visas to the censorship bureau, to the bureaucracy, to the political grip on the syndicates.”

Easing the process, helping those in need

One organization that has managed to create financial sustainability for itself through such means of grassroots organizing is arts NGO Haven for Artists, an “unapologetic platform at the intersection of art and activism.”

Long-known for being a safe space for women and LGBTQIA+ in Beirut, the organization was fast to act after the Beirut Blast, utilizing its international network to bring in relief money and acting as the middlewoman between independent fundraising artists and curators around the world and Beirutis.

For Executive Director Dayna Ash, channeling dollars “directly into people’s pockets, in cash” without having to rely on big funding organizations with extensive application processes, and outside Lebanon’s bank system, was extremely important.

Haven for Artists’ support was not limited to artists, but the organization launched its “Artist Support Fund” with the help of Beirut Editions and Venice-born international curatorial collective a.topos to aid artists residing in Lebanon with funding their projects and purchasing equipment.

“It was just about creating sustainability for [artists], instead of having them write proposals for three months and getting rejected, or writing 60 page proposals and trying to fit a mold that does not befit our situation, nor our crises,” she explains. “We allocated a [certain sum] of the money to go to artists directly, and the rest went to other people in need like LGBTQIA+ people and migrant workers.”

However, this bypass did not come without its difficulties. For an organization like Haven, impediments from the government are often expected, considering the nature of its work with mostly queer and other minority groups.

During the arbitrary lockdowns earlier this year, Ash explains that the government and army were asking for information about aid distributors and their recipients, which Haven refused to give so as to not put anyone’s safety at risk. She also cited taxes as one of the biggest obstacles to aid distribution.

“Are they going to tax us at the LBP 1,500 rate? At the LBP 5,000 rate? At the black market rate? We have no idea. And the Finance Ministry in Lebanon is one of the only ministries that has the right to release a retroactive circular. The fear that we have most now is that our government is ripping us off, because they also might tax 30 percent on all our aid. Where do we get that money from?” Ash said.

This disregard for government regulation and support has become a widespread sentiment, pushing many cultural institutions into rethinking the purpose of their work. With its surveillance and police structures slowly dissolving, along with the rest of the country, the government and its bodies have long become inept.

“After your own government bombs you, what’s left to be scared of?” Sultana remarks. “They’re going to kill you whether you’re queer or not, or whatever else.”

Collaboration has proven indispensable for sustaining the arts, and the future lies in finding alternative structures of production, specifically for work that reflects, critiques, and challenges the moment the country is in right now.

A wholly united front seems a bit far-fetched in the near future, with the majority of Lebanese navigating the collapse one day at a time, but it seems that collaboration and alternative structures of production and economy, within and outside the arts and culture field, are guiding principles to move forward with.