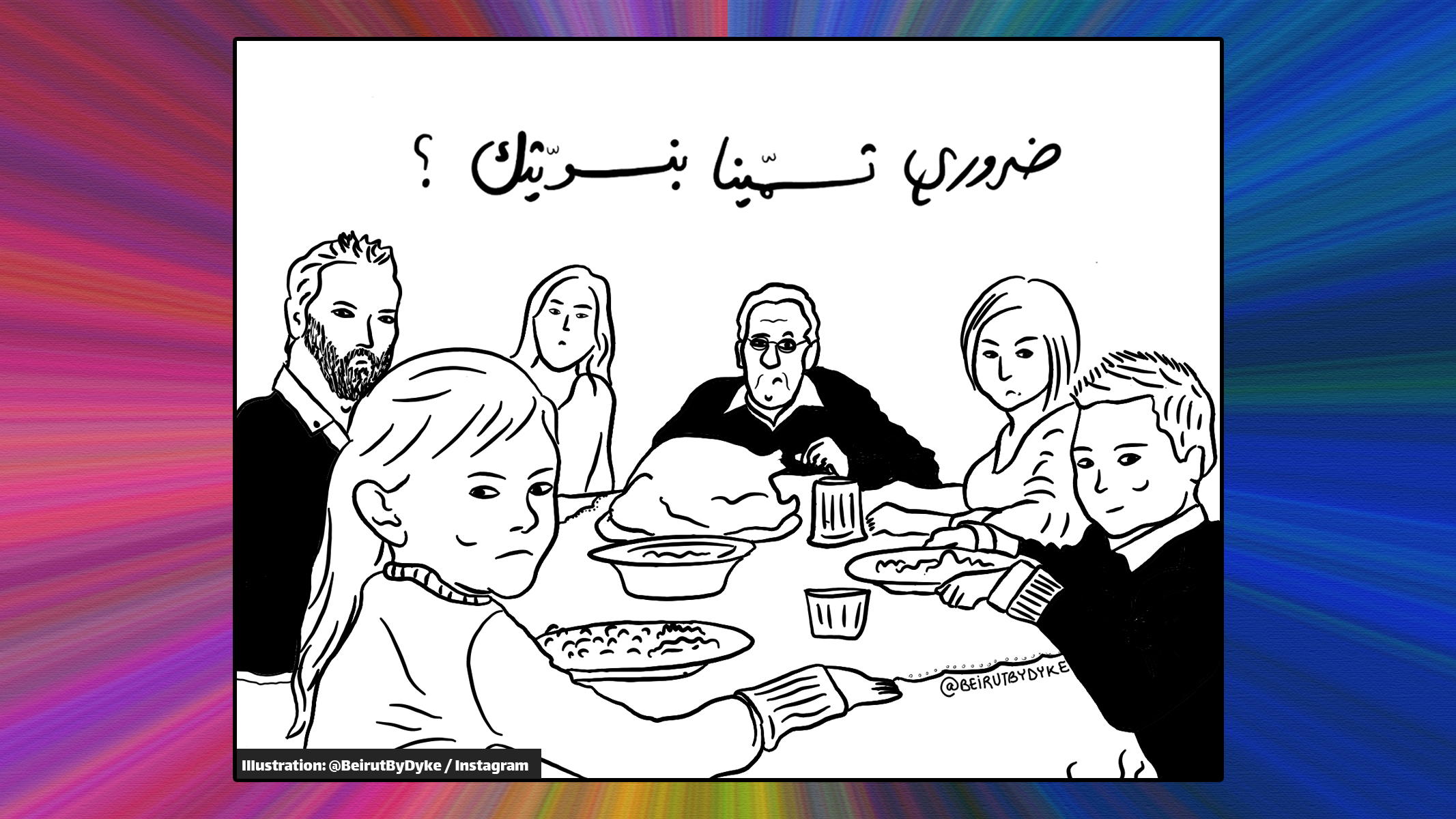 Queerness in the Arab World: A tool to challenge a subversive reality?

As a queer woman, I have lived through the struggle to remain true to yourself despite societal pressure. Societal expectations have always come in the way of my freedom to express my sexuality. This is why the death of Sara Hegazi hit so close to home. The Queer community identifies with the darkness that lead to Sara’s suicide. Queer people in oppressive communities fight for their lives every day.

The Egyptian activist had the courage to express her sexuality with pride, inspiring and empowering queer youth in the Middle East. Hegazi bravely raised the pride flag at a Mashrou’ Leila concert three years ago, and she was subsequently  tortured and imprisoned. She lived in exile in Canada after that. The torture and cruelty of being rejected time after time for simply expressing her sexuality openly led her to leave this world much too early.

Once again, we find ourselves in tears, trying to challenge the  homophobic societal and institutional structures in and beyond the Arab World. How many lives does hegemonic heteronormativity have to take before we realize that queer people have the right to exist freely?

The tragic death of Sarah Hegazi brought up once again the controversies of being queer in the Middle East. What we can learn from this heartbreaking death is that queerness in the region is alive and present, and the struggle for acceptance is more prominent than ever. To keep Sara’s legacy alive and  pay tribute to the brave fight she led, we must support and acknowledge past and current efforts of queer activists in the region.

Queerness is defined by any performance that falls outside of the gender norms imposed by societal structures. At a time where more and more queer people are gathering the courage to express their sexuality freely, queerness in the Middle East has become a sensational topic worldwide.

History has taught us that sensationalizing such issues only erases the long and lasting struggles of all those who challenged the status quo at different points in time.

Maya Mikdashi, a pioneer in queering Middle East studies in the academic world, defines the methodology of queering as “a way of interrogating normative practices of and assumptions about race, class, the state, and the body.”

Looking at queerness in the Middle East helps us question the “normal” and “natural” conditions imposed upon us since birth. It helps us understand that normative social categories can be disrupted through everyday performances of resistance. Indeed, the simple fact of existing as a queer individual in the Middle East is a revolutionary act on its own.

Queer presence and activism is widely pink-washed. Most of the content we are exposed to that normalizes queerness comes from the West. RuPaul’s Drag Race is just one of the many Western shows that have received international acclaim, including from the Lebanese queer community. Our ideas of queerness are often shaped by Euro-centric and Western ideals.

Mainstream media in Lebanon still has a long way before representing queerness and challenging societal norms. However, grassroots activists such as Sinine Nakhle constantly try to fill in the gaps.

Nakhle is a writer, artist, and activist but most importantly, she is a queer storyteller. On her Instagram page @BeirutByDyke, Nakhle shared her personal story with the rest of the world. The page keeps track of her  constant altercations with oppressive behaviors.

She uses social media to openly express her right to exist as a queer woman.

She uses a variety of mediatic instruments to shed light on the struggle  of growing up queer in Lebanon. On the wider spectrum, she uses her digital space to write and illustrate her experience through her “cartoonesque” characters.

Her page almost resembles a revolutionary comic strip where she documents the lived experiences of queer people in the Middle East. By sharing her story, she is compelled to have ownership over her own reality –despite the backlash of those who refuse to embrace and accept queerness.

Nakhle’s story is representative of many other queer people’s experience, because the scene in the region  fails to represent queer female storytellers.

“It was never my own,” said Nakhle about her autobiographical project coming to life.

Her documentation of a queer female experience reflects the active struggle of queer individuals in the region. Her comics are a collective experience, because queer women face similar obstacles everyday. By pushing the public to identify with her past and present experiences, Nakhle’s page  sheds light on the multiple micro-aggressions queer women face daily.

Nakhle also told Beirut Today that her visual and written documentation provides us with the possibility to reclaim our narrative. This in turn allows minority voices to gain more visibility and recognition in the public sphere.

Her digital space offers a safe environment for all those who have suffered from queerphobic oppressive and discriminatory behavior. For example, Beirut By Dyke was one of  the first social media activists  to shed light on the multiple accusations received on the serial harasser Marwan Habib.

At a time when mainstream media was sensationalizing the issue, she provided a secure digital safe space where people could come forward with their traumatic experiences.

The safe space established through Nakhle’s digital world is a necessary form of activism in today’s contemporary society. Her activism  reaches a wide range of people, opening up the conversation on queerness in the Middle East.

In one of my favorite comics, Beirut By Dyke depicts two women embracing each other on the stairs of one of the most social, busy, and famous streets in Beirut, Mar Mkhayel.

Nakhle explained that the comics generated backlash, because these queer women “are not supposed to be here.” Her depiction of a normalized queerness in Lebanon brings up new perceptions of love and relationships in Arab public spaces.

On the back of one of the queer women in the comic, revolt is written in Arabic. This small detail represents the subversive intent of her comics. The simple act of reinventing the space for gender non-conforming individuals provides us with an alternative from current realities.

Therefore, normality is a subjective and ever-changing concept that activists such as Nakhle are continuously challenging. The narrative and imagery Nakhle presents through comics such as the one mentioned earlier disrupts fixed gendered expectations. Nakhle explains that sharing a different idea of “normal” gives her and many others “the ability to imagine ourselves differently.”

It is crucial to see the subversive potential of queerness. Nakhle, among many other queer activists, allows queer individuals to engage with an alternative narrative –one we can relate to and identify with.

Through storytelling and other forms of activism, the queer community showcases the hardships of never belonging.

Queer activism requires strength and bravery to  fight for a new idea of “normal.”

It is our duty, as allies or as queer individuals, to continuously support those whose stories have been omitted from the mainstream discourse for as long as we can remember.

“We cannot claim to know or even imagine what Sara Hegazi went through before leaving this world,” said Nakhle. “What her writings and activism do tell us, among many things, is that part of dismantling a heteropatriarchal system has to do with documenting our embodied experiences within it. Telling our stories is a way of resisting the way in which they unfolded.”