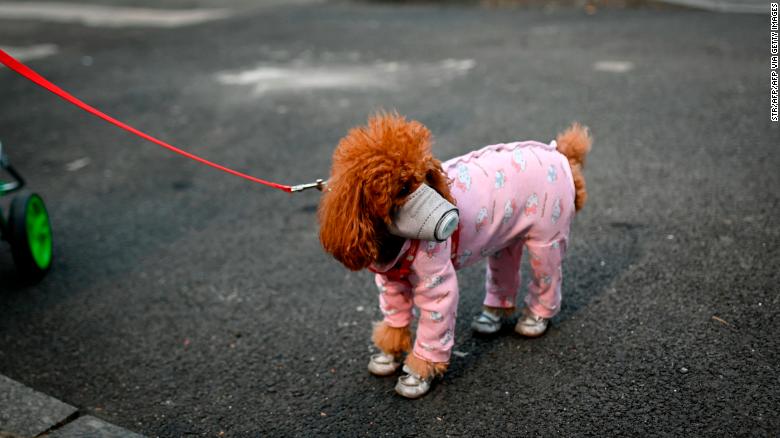 A dog wears a mask over its mouth on a street in Beijing on February 13, 2020.
Home
Better Living

Anyone who has ever visited Beirut will find it impossible to picture the city without its hustle and bustle, but the COVID-19 pandemic is changing more things than we realize. When it first reached our doorstep, panic and hysteria quickly settled in and an outbreak laid itself down as a very realistic possibility.

Whole lives had to be restructured for the sake of safety and security, in the span of virtually no time whatsoever. As households turned towards obsessive levels of sanitation and cleanliness, many decided to let their own pets go in fear of the coronavirus.

There is currently no evidence that suggests pet dogs and cats can transmit COVID-19 to humans, but in the midst of the news whirlwind and chaos, information is easily lost in translation.

From an economic crisis to a pandemic, animal welfare groups have it tough

Once the pets were released from the care and safety of their homes, they became somebody else’s problem. The burden of caring for them, however, is proving extremely challenging at a time when one can be fined for roaming the streets without a special notice.

“Our abilities to help are certainly changing. With the office closing, volunteers not allowed, and staff increasingly working from home, it is incredibly challenging to keep up,” says Jason Mier, the executive director of Animals Lebanon.

Since 2008, Animals Lebanon has rescued companion animals and cared for them, fought to change laws on animal welfare, and combatted illegal wildlife trade. Today, the organization is struggling to deliver its services when it has been forced into closure.

Like many other local businesses, the NGO was already struggling underneath the weight of the financial crisis –only to have a pandemic arrive not much later.

As Lebanon’s economic situation deteriorated, the NGO began to build a steady stock of supplies to keep their work going –but this period of hardship is now extended into further notice due to the outbreak.

The medical state of emergency has temporarily put all operations on pause. Animals Lebanon now has to rethink the ways in which it can provide services in a safe and secure manner.

“The reality is that some programs and projects must be put on hold as they are simply not possible at this time,” said Mier. “We are working regularly to re-plan as this develops. For example, we were in the process of sending a number of endangered wildlife to sanctuaries in France and the US but those trips were cancelled as flights stopped.”

The NGO has decided to redirect all resources into “increasing communication and information sharing, as well as helping people get what they need for their animals.”

Despite that viral story you saw, pets cannot transmit COVID-19

With the abundance of fake news surrounding COVID-19, Animals Lebanon is trying to raise awareness. Through their online platforms and media channels, they are working in coordination with officials and Ministries to increase the spread of legitimate information. Vital services such as rescuing abandoned animals will also remain.

Concerns regarding pets and the coronavirus began in February when a dog in Hong Kong tested “weak positive” for COVID-19. The story went viral within a few hours, as pet-owners worldwide grew apprehensive towards their pets. At the time, the incident reflected a plausible case of human-to-animal transmission.

After extensive research and experimentation, medical experts ruled against the idea, stating that pets cannot contract the virus nor carry it. By that time, citizens worldwide had already dumped their pets on their streets.

Many circulated the news without proper insight into the matter, as fake news once again trumped facts and evidence.

People are also abandoning pets because of economic hardships

Their awareness campaigns may help with the issue of pet neglect, lowering the amount of pressure exerted on the NGO. But another problem remains: Pet owners are not only abandoning their pets in fear of COVID-19, but also for various economic reasons.

“There has been an increase in abandonment of pets since the start of the protests in October, and that has continued to increase as prices have went up, basic supplies like food have increased in price, capital controls, and people being underemployed or unemployed,” says the NGO.

The resources of Animals Lebanon have been spread far too thin. The local community is one pillar of support the NGO can lean back on; people continue to donate funds and supplies, essential for the continuation of their work.

People are urged to adopt or foster animals, which could provide companionship for many during this period of social distancing, while easing the work of the organization. When everyone is locked in and isolated, a few minutes of walking or cuddling with your dog every day may prove therapeutic.

Information on COVID-19 is continuously updated, with news circulating around the hour. Refreshing news feeds and listening to the same conversation constantly can be mentally draining, and while it is important to shut off the news every once in a while, it is equally important to validate the information you are receiving. One thread of misinformation has cost many pets their homes across the globe and in Lebanon.