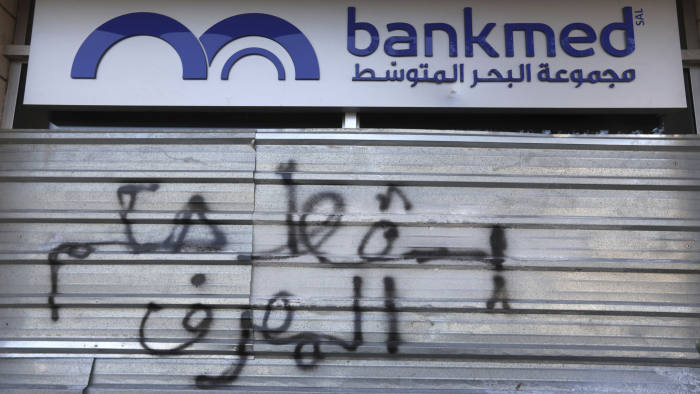 “Down with the rule of the bank” reads this graffiti on the door of Bankmed, one of the top five banks in Lebanon. A default deals a major blow to the banking system in Lebanon. (AP / Financial Times)
Home
Economy

Lebanon’s default: What it means, what’s next, and who’s to blame

On March 9, the deadline for Lebanon’s repayment of $1.2 billion in Eurobonds passed with the country choosing to default on the debt for its first time ever.

For context, the Eurobond is an external bond issued on behalf of the European union in a foreign currency. In choosing to default on this repayment, the country is openly declaring its crisis in the face of investors and countries worldwide.

Prime Minister Hassan Diab cited that the reason behind this default is to seek out debt restructuring as part of a rescue plan looking to minimize state spending and save $350 million per year.

Prime Minister Diab, in a live address, said that foreign currency reserves had fallen to “a critical and dangerous level” and that defaulting is the “only way” to stop them from being further drained.

Lebanon now enters difficult debt restructuring negotiations that “will take time, effort, and will require painful measures.” As part of his government’s rescue plan, Diab said he plans on downsizing the banking sector while protecting the bank deposits of small depositors.

Should Lebanon have defaulted?

With serious repercussions on international and internal levels, the default risks further aggravating the country’s financial troubles. But Lebanon’s economy is on the brink of collapse, with or without the default.

Creditors can now move forward with legal action against Lebanon because of the default. UN Special Coordinator for Lebanon Jan Kubis encouraged “creditors to work with the government to avoid disorderly default.”

In the same tweet, Kubis said that the “honest statement of PM Hassan Diab about the failure of the previous economic model opens the way out of the crisis.”

1/2 Honest statement of PM @Hassan_B_Diab about the failure of the previous economic model opens the way out of the crisis. I encourage creditors to work with the government to avoid disorderly default following the suspension of the 9 March Eurobonds payment…

Local banks, which as the main lenders of the Lebanese government own a chunk of the Eurobonds that matured on March 9, expressed their opposition to the default. They fear the default compromises Lebanon’s ties and reputation with foreign creditors and further strains the economy.

Meanwhile, experts and protesters argued against the repayment in fear that it may deplete foreign currency reserves, worsen living conditions, and make the acquisition of basic needs more difficult. In November 2019, the World Bank warned that poverty in Lebanon could rise by 50 percent because of the ongoing crisis.

With severe economic turmoil, the likes of which have not been seen since the days of the civil war, and panic following the coronavirus (Covid-19) outbreak, the news is just one blow among the several issues facing the country at the present time.

Following the end of the civil war in early 1990, politicians sought out foreign loans and investments to rebuild the country. Lebanon would end up with an unsustainable economic model, non-tradable and non-exporting sectors, and an increasing debt to GDP ratio.

As anti-government demonstrations enter their sixth month, protestors continue to express contempt towards the ruling class and government, blaming them for the ongoing crisis and for benefiting from the economic model they set up at the expense of the people.

Local Banks: Part of the Problem

The country’s foreign currency reserves are currently undergoing drainage as the prices of foreign imports rise and local businesses face closure. Amid increased stagflation and unemployment rates, the Lebanese pound is undergoing devaluation and plummeting when pegged against the dollar.

In an effort to prevent further economic collapse, Lebanese banks have been illegally practicing capital control by decreasing clients’ access to their savings, lowering the amount of cash withdrawals, preventing cross-continental bank transfers and banning use of credit/debit cards abroad.

Many Lebanese citizens have resorted to requesting consideration for exceptional case scenarios, going into negotiations with bank officials to send money to relatives abroad. Most of these cases have been rejected, forcing citizens to resort to other ways to retrieve their money.

The government is in urgent need of a debt restructuring and economic rescue plans to prevent further collapse. Diab had previously hosted advisory meetings with a delegation from the International Monetary Fund (IMF) to discuss solutions for the spiraling economic crisis.

The country currently holds one of the largest debt sums in the world, now equivalent to nearly 170 percent of its GDP. Yet, is the current government able to face these challenges?

In a meeting with the members of the Honorary Consular Corps, Prime Minister Diab said that the government “can neither protect the Lebanese people nor offer them a life of dignity.”

The Prime Minister cited the failures of previous governments as the reason for this government’s inability to provide a rescue plan.

The situation however can no longer afford to wait and the Lebanese people can no longer offer any more patience. Many are incapable of resuming their lives within Lebanon due to poor living conditions, low wages or unemployment, and lack of public services. Often, their solution is to leave the country and pursue their ambitions abroad.