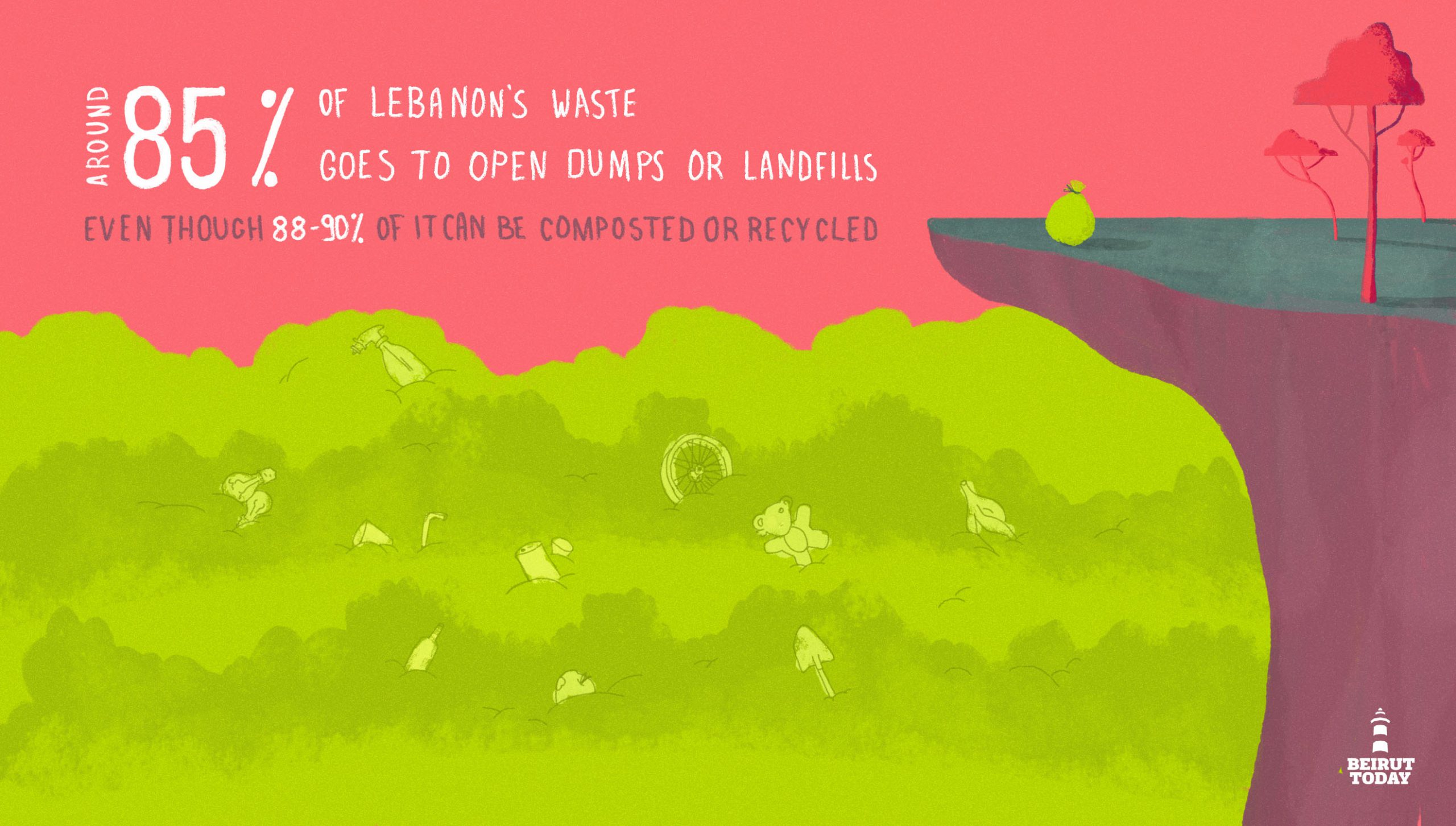 Around 85 percent of Lebanon's waste goes to open dumps or landfills, even though 88 to 90 percent of it can be composted or recycled. (Infographic by Christina Atik)
Home
Better Living

“What’s happening with the Amazon is so sad,” commented the woman you matched with on Tinder last month as she drove you home. You pass Forum De Beyrouth and, instinctively, roll up your windows before the stench of trash knocks you out.

The Amazon fires and the Lebanese garbage crisis are one and the same. Both are human-induced. The fires are the work of cattle ranchers and loggers who want to forcefully clear and exploit the forest, riled up by a capitalistic president who believes Brazil should open up the Amazon’s resources for business. The unending trash crisis is the work of consumer habits in Lebanon, exponentially worsened by the divided policies of politicians who have so much illegitimate gain to lose if they steered the country away from incinerators and landfills.

For the past two decades in Lebanon, governments have pursued the short-term solutions that environmental experts and activists in the country have consistently warned against. The effect of their decisions manifested to the public through the 2015 garbage crisis. The short-term solutions have been costly on our economy, hazardous to our health, and harmful to our environment.

Much to the disapproval of environmentalists, the Lebanese Cabinet approved a 10-year-waste management plan that will add 25 more landfills and 3 waste incinerators to the country. The August 27 Cabinet meeting also determined two of the locations for the waste incinerators: Beirut and Deir Ammar. The third location will be agreed upon in the South.

“Most of the articles of the plan were approved,” said Environment Minister Fadi Jreissati. Where the funds will come from to implement the articles, however, will “need more study.”

MP Paula Yacoubian criticized the “catastrophic” plan, considering that almost 90 percent of Lebanon’s waste can be composted or recycled. Despite that, 85 percent of our trash goes to open dumps or landfills.

“The type of waste, our geographical location, and our air dynamics make incinerators an unsuitable solution for us,” Yacoubian told Annahar.

The plan also imposes taxes on products like nylon and plastic, and makes the separation of recyclable and non-recyclable trash from the source necessary. Whether or not recycled trash will be burned in incinerators has not been announced. Yacoubian also told Asharq Al-Awsat that the mechanism to sort from the source is missing from the plan.

Why does the government insist on incinerators to solve our garbage crisis?

“Incinerators are a cash-cow, both on the construction phase and the operation phase,” Ziad Abi Chaker, the CEO of environmental and industrial engineering organisation Cedar Environmental, told Beirut Today in a previous interview.

Incinerators cost no less than $350 million to build. Operating the facilities are no better. Low estimates suggest that the facility would need between $125 to $140 to process each ton of trash, while a 2015 study estimated that Beirut and Mount Lebanon generate 1550 tons per day.

The government approved an environmental plan without the proper knowledge of the mechanisms to implement them and how they’ll pay the costs, reminding activists and everyday citizens of what they’ve been dying for a reason to doubt: Authorities give themselves elbow room to illegally gain profits by approving vague plans that have no set strategies and huge costs of implementation.

Couple this with the fact that the Cabinet believes it is above the law when it comes to providing the public with data and records. In late June, two civil society groups requested documents on a 2018 Cabinet decision on the Deir Ammar power plant and were denied access. Without the proper implementation of the Access to Information Law, Lebanese citizens have no way of knowing  what percentage of the money being put into the approved environmental plan is being funnelled into the pockets of authorities.

It’s difficult to inflate the costs of other solutions, like recycling, because they reap less profit on the surface. Turning to incinerators is a tempting quick-fix for the accumulating trash and for generating energy but research suggests that investing in sustainable waste management solutions can minimize the costs of dealing with the health and environmental impacts of incinerators and landfills. Green solutions, on the long-run and with the right culture, work for our economy.