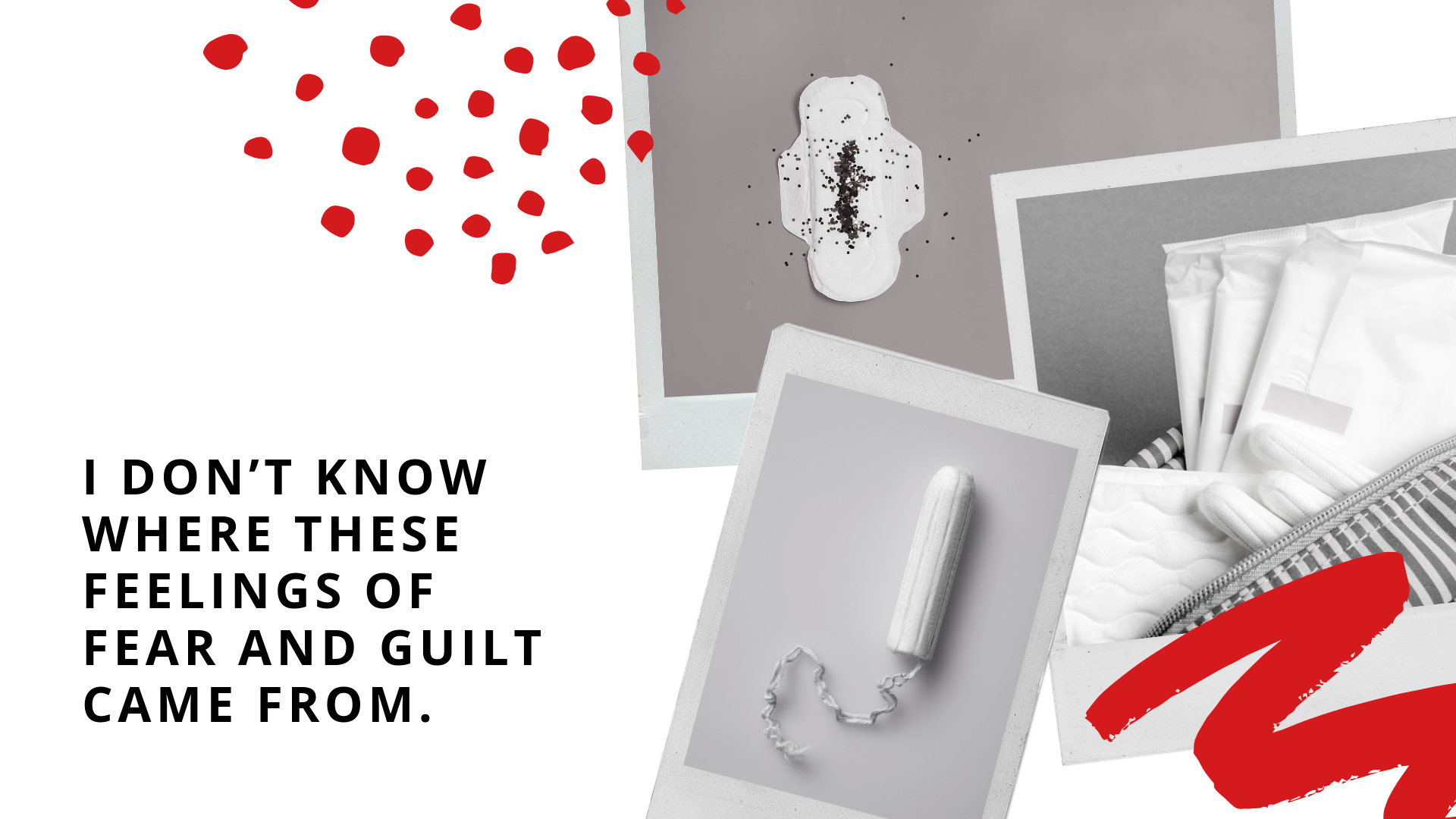 I Got My Period

This article is part of a series written in collaboration with KAFA, a feminist NGO that seeks to end gender-based violence and exploitation in Lebanon. The original article was published in Arabic on the KAFA website.

I had just started to hit puberty when my grandmother called me over.

“If you see a spot or two of blood on your underwear one day, don’t be afraid. Come and tell me right way and I’ll tell you what to do. This happens to girls, it’s a good thing that means you’ve started to become a young woman. It happens to us all,” she said.

I never imagined all the trouble that would come with it.

I didn’t really understand, but I liked the idea of something that happens and stands as evidence that I’ve grown and “become a young woman.” I was certain that no one would be able to call me a child after it. In reality, my eyes glistened when I thought of that and I started visiting the bathroom more than usual in my wait for this decisive moment.

When my grandmother spoke to me about the subject, I imagined that this would only happen once, that I would become a young lady after it, and that the process would be over. I never imagined all the trouble that would come with it.

I waited for at least six months until the moment arrived. I finally got my period!

I left the bathroom yelling and cheering like Archimedes. My grandmother asked me to settle down and taught me how to use a menstrual pad. It started to seem like the occasion wasn’t one to celebrate as I initially thought, considering my grandmother was taking it so seriously.

At this stage, I was introduced to the “black bag,” a little pouch I put the pad in before throwing it with the rest of the trash. I wondered why, thinking of everything else we throw in the toilet bin. My grandmother explained that it is frowned upon to throw menstrual pads out in the open, because they’re related to feminine things that don’t happen to men and that should be hidden. I shrugged it off, believing that it wasn’t that much of an important subject to me.

When I told her that I had a pad in my bag and that I wasn’t sure whether they were allowed at school, she told me to hide it well.

In the beginning, using menstrual pads was fun. I finally understood the television ads that had been so obscure to me before, which made me feel like I had become an adult.

The next day, I went to school with a pad. I was in fifth grade, and at the time I would sit in the back seat near the window. To my right sat Ahmad, a rowdy boy who was two years older than me because had failed two years in a row. To my left sat Rouba, who was older than me by one year.

I wanted to tell the whole school that I had “become a young woman” but I also felt a bit shy. I told Rouba about my period during break. She would go on to tell me that she had already experienced it and that, to my surprise, she doesn’t like it. When I told her that I had a pad in my bag and that I wasn’t sure whether they were allowed at school, she told me to hide it well.

When I went back to class, I found Ahmad waving the pad around the classroom and asking who it was for. I was scared, and I was afraid of being punished for having it with me. I was worried everybody would ask me about it, and I was disgusted to use it after Ahmad had put his hands on it.

I tried to calm myself down by saying that nobody would know it’s mine. If they asked, I would say that I didn’t know who the pad was for. Then I remembered that Rouba knows and that she might confess the truth, for which I would be punished. I don’t know where these feelings of fear and guilt came from.

I ran towards Ahmad, grabbed the pad, and threw it out the window. He was upset, proceeding to ask me if it were mine. I told him that it wasn’t, but that I was grossed out by it and that I didn’t want him to get into trouble with the school. I also told him that I didn’t know what it was used for in the first place, but that I had seen advertisements for it on the television.

Why the subject had to be a secret was beyond me.

He laughed and assured me that he wouldn’t tell anyone. It was the first time he was ever sympathetic. I still don’t know what pushed him to be so responsive that day.

Why the subject had to be a secret was beyond me. Being on your period was something I compared to the idea of going to the bathroom, which we’re not ashamed of admitting. So what was the big difference? And what’s the point in becoming a young lady if I couldn’t share it with anyone? I didn’t get it.

The most difficult part was hiding my period from my brother, who knows all the details of my life and shares all the details of his life with me. He asked me once if I “got my period” and all I could do was deny it and pretend that I didn’t know what he was talking about.

The first month passed, and I thought that it was all over. In my mind, I had graduated from childhood into young adulthood.

Almost a month later, that thought would be shattered and I would rush out of the bathroom to tell my grandmother that it was happening again. I was scared, thinking it had returned because I had done something wrong the first time. I believed it was just an exam I had to pass once. Never once did I even consider that it might be a cycle.

I hated myself, my womanhood, my brother, and all men.

My grandmother laughed at my innocence. In the middle of my horror, her laughter provoked me but she would go on to explain that it was a monthly occurrence that would happen every month, regardless of what I did or didn’t do.

That was the real shock. Every month? For the rest of my life? It was a burdening thought. I imagined myself to be a lifelong prisoner of this cycle. I remembered what my life was like a few months ago: freer, happier, and without a burdensome secret that I had to hide.

I hated myself, my womanhood, my brother, and all men.

I never reconciled with my period, with the bad mood it brings and with the powerful hormones that seem to take the steering wheel in my mind to control how I’m feeling and how I’m acting around others. I imagine it to be a grey ghost with white teeth. My period is strange looking, tiny, extremely sharp, and ready to pounce on anything that moves unexpectedly. When this strange being visits, I become more complicated. I lose the ability to understand myself. I crave things and their opposites at the same time.

I feel like a ticking bomb has been implanted somewhere in my mind, and that I can never know when or where it will go off. And I wish it would go off, but instead it leaves me hanging and worried, with complex and unidentifiable shapes going through my head and invisible threads moving my body.

We learn all the best tricks when it comes to blood from a very young age.

When I share these feelings, they’re shrugged off and dismissed as hormones. It’s true. They are hormones that come to me every month for ten days. My period reminds me of a computer virus that’s only controllable sometimes, one that comes and goes, makes strange things happen on a screen, and stranger things happen in my mind. With all this hormonal noise comes the irregular physical pain. As soon as the hormonal bomb begins to settle, the soul drenching, concentrated physical pain begins.

I once heard on a talk show that women are better than men at hiding their crimes. I don’t know how accurate this piece of information is, but I wouldn’t be surprised if it were true. We learn all the best tricks when it comes to blood from a very young age, and we hone these tricks. We are taught how to deal with it: the best detergents to get rid of it, the ideal water temperature for it, and the colours that go or don’t go with it.

We learn how to deal with a crime that happens inside of us, how to hide our daily bleeding, how to mask its symptoms and clean it up. And we learn to ignore it. We do all this sometimes while being forced to be positive, lively, and smile through our lying yellow teeth.