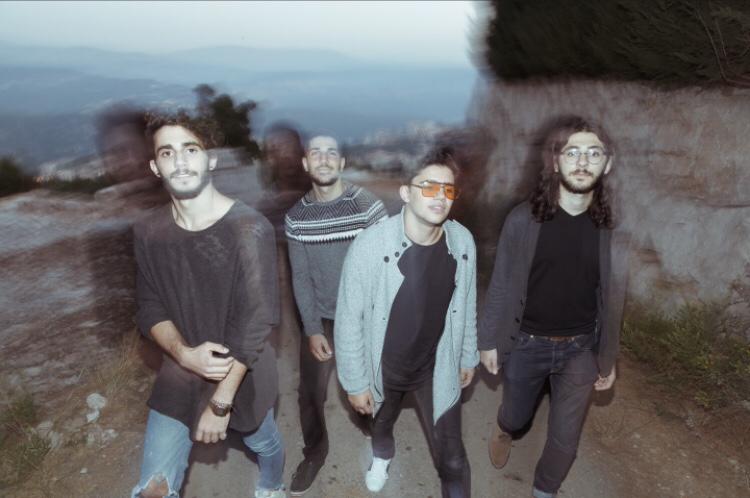 Four musicians find their own modest space around a massive, multi-coloured pedal board that takes up most of the area outside of the Bach Music Institute’s Blue Room. Ray Charles and Jethro Tull’s Ian Anderson watch over them from posters scattered on the wall, an interesting but fitting mix of legends for musicians who come from different backgrounds. Post-rock band Ilvy –Paul Toubia, Anthony Hakim, Joe Kareh, Gabriel Sarkissian– are preparing themselves for a late Sunday night practice a few days ahead of their Wednesday gig at Metro Al Madina.

Similar to their divergent musical influences, the members of the Lebanese band distinctly occupy the space among the clutter of guitar cases and wires. Paul, on guitar, sits and speaks calmly in the corner looking like John Lennon’s long-lost brother. Joe, on bass, hovers anxiously near the pedalboard in a red jacket but takes lead on the conversation. Gabriel, on drums, sits on the black couch silently but listens attentively to what his bandmates are saying. Anthony, also on guitars, finds his spot on one of the cases lying on the floor. The others joke that they’re going to find the instrument bent when they open the case.

When they’re on stage, Ilvy lets their music do the talking. They grip and hook their listeners with a consistently surprising “wall of sound” that ranges from heavy instrumentals to light ambient sounds. Their spaced out performances add to their constantly shifting sound, which Ilvy says often draws out the same energy as “childish, repetitive” vibes. Their wall of sound could –probably– even overpower the television loudly blasting a football game a floor beneath where we sit.

On Wednesday evening, Ilvy will be playing their first real gig in roughly a year. It’s almost 10 pm on a Sunday and Ilvy are anxious to practice. They speak to Beirut Today briefly, making sure every word counts. Their music falls in line with that same energy.

Let’s start with some background.

PAUL: We had a previous band before and we just evolved as musicians and ended up doing Ilvy.

PAUL: In 2015. We used to be a cover band. We had a singer and each of us had a different vision of what we wanted the band to become, so we parted ways because of that different vision.

JOE: After that we started getting introduced to new music that we got influenced by and wanted to play in our new band, like shoe-gazing and post-rock. We’ve performed several times starting our first performance two years ago.

PAUL: We played an event called Vector Glitch in March 2017–

Since then, has the experience of performing changed for you?

PAUL: Last year we played in Irtijal and there was a big difference.

JOE: We started somewhere and we reached somewhere else. We created an identity for ourselves.

How would you describe that identity?

JOE: Ouf. [To Paul] What would you describe our stuff as?

PAUL: The thing is that every one of us has their own background but there’s chemistry between us so it created something new. People in other bands describe us as “doomgaze” but we just like the term “post-rock” because it can describe anything.

Would you say your different backgrounds clash sometimes?

JOE: Yeah, of course. Which is normal. Sometimes we go through those phases but a lot of the times it’s the opposite as well.

PAUL: I think it’s a good thing to have these clashes because otherwise you’re not stepping outside your box if all of you always have the same line of thought. There’s nothing new.

So you’re playing on Wednesday at Metro.

How are you feeling about it?

PAUL: It’s been a while since we’ve played.

ANTHONY: It’s been a year since we’ve had our last gig, aside from performing at Sofar. So we’re hoping it goes well.

How come your performances have been so spaced out? A year is a long time to not perform.

ANTHONY: A lot of venues closed–

JOE: Like Yukunkun and BOS [Beirut Open Space]. I think it was a time when Lebanon passed through a lot of economic problems so everything sort of went down in the scene.

PAUL: We were super unmotivated. We weren’t practising often and all that.

Someone was telling me about your stuffed monkey mascot. What’s that about?

ANTHONY: Where is he?

ANTHONY: It’s cold. But he might come to Metro on Wednesday.

JOE: The thing is about the band that our inspiration, most of the time, comes from a childish, repetitive vibe. That’s why we have many sounds, like in Ballons Rouges or Esther.

PAUL: Our songs can be super simple–

JOE: Even our sound is not that complex. It’s very simple, very one-notish.

PAUL: We focus on effects and pedals more than anything.

JOE: That’s why we used the monkey. He even helped us in the final part of one song.

How are you using poetry?

PAUL: We want to put a transition between two songs but we don’t want to make it too cheesy and put a speech or something so we thought “why not use poetry.”

On the subject of the time lapses between your performances: every time you play, it’s very distinct. Where do you draw this inspiration from?

PAUL: I guess it’s also related to us having different backgrounds. Most of the times, Anthony has an idea and he plays it and we all piece it together.

Are you guys coming up with new music now?

PAUL: We came up with a new song recently.

JOE: Almost all the time, we make new music.

PAUL: A lot of the times, we compose and we’re super happy about it but then we play it and it doesn’t work out.

JOE: But in every set we play, we usually have one new song in it.

PAUL: We forget about two-thirds of the songs we compose.

When will you be putting it all together in an album or something similar?

JOE: We’re fundraising. That’s why we’re performing at Metro. We need an album, and then everything would become easier. Everything is easier when you have an album. But getting it made is the hard part, in Lebanon especially.

ANTHONY: You need an album to play festivals and tours and everything.

JOE: You can’t do anything without an album.

Are you finding it difficult to actually raise these funds?

PAUL: Yes, especially given the fact that we weren’t doing anything for a year. It wasn’t a very smart decision.

And is it harder, you think, being an instrumental band?

PAUL: Yes because our music isn’t commercial and it’s not easy listening. You can’t play it at weddings, for example. You’re stuck with the underground scene. And since in the scene the same people go every time, you can’t play a gig every week.

ANTHONY: People would get bored. They have to miss you.