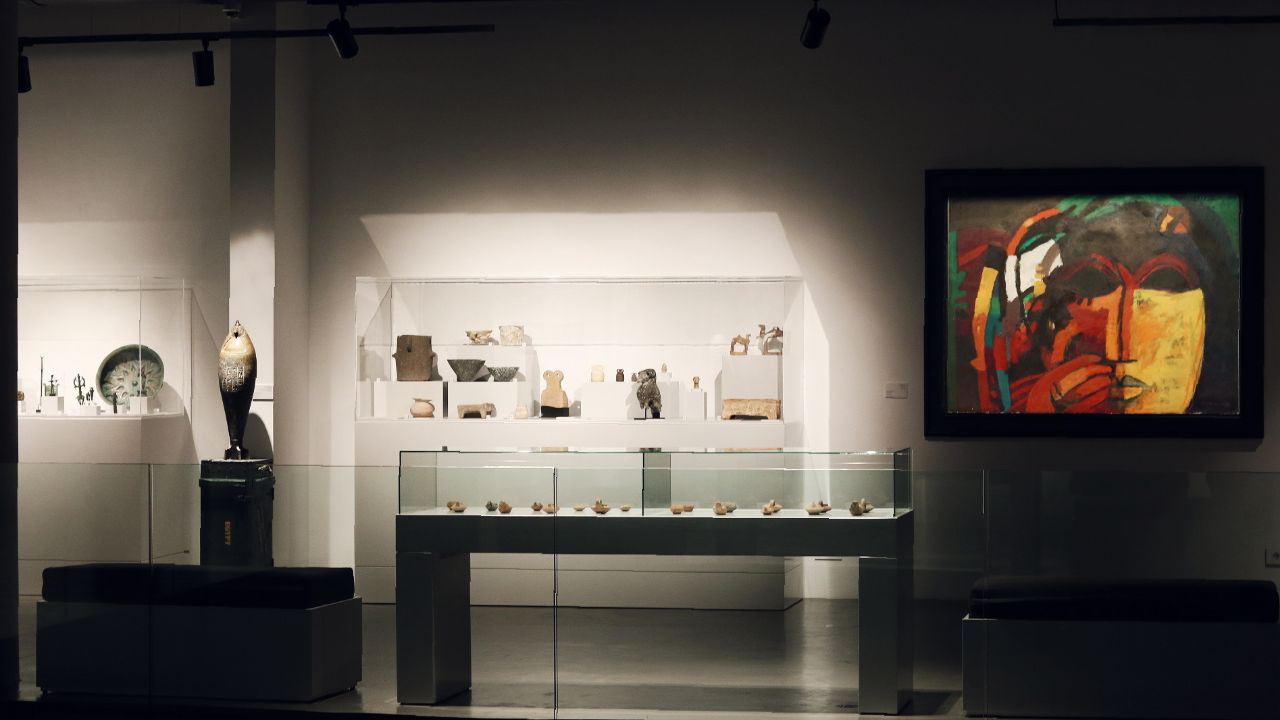 Named after the Mesopotamian patron god of literacy, the Nabu museum occupies a small, modest space on the shore of El-Heri village in the North of Lebanon. A new member of Lebanon’s long list of museums, Nabu offers a permanent collection of work that pools together rich artefacts from the Roman, Greek, Byzantine, Phoenician, Mesopotamian and contemporary Lebanese cultures.

In itself, the museum is a sight for sore eyes: Unconventionally located by the shore, Nabu occupies the space between the pillaring Lebanese mountains around it as a sculpture would. Designed in collaboration with Iraqi-Canadian artist Mahmoud Obaidi and Iraqi artist Dia Azzawi, the museum is shaped like a cube and enveloped with a façade of “weathering-steel representing a monumental scripted relief.” Inherently tough and changing colours after exposure to humidity, the weathering steel alone will one day reflect the long history of the museum.

The three-floor complex offers visitors the unique opportunity of observing several displays that have little in common with each other, but are all derived from ancient civilisations with strong imprints on world literature. With its vast central space, the museum forges a creative atmosphere that enables a sense of community between modern-day visitors and age-old art.

In stumbling along the museum’s displays, visitors will observe paintings, ancient pottery, and first-edition copies of Khalil Gibran’s “The Prophet,” among many more. Other stand out pieces include 2,000-year-old alabaster statues from the Arabian Peninsula and Babylonian tablets with what is recognised as the earliest forms of writing. The collaborative and interactive space allows creative dialogue and reflection to be nurtured.

In comparison to the inside, the outside holds only a few statues lining the walls of the museum, a small, sizeable garden and a picturesque dock dipping into the ocean. Reaching the end of the dock allows a panoramic view of the museum, the mountains engulfing it, and the nearby highway.

While the museum does offer a rich and diverse collection of artworks, its key selling-point lies in its location, which sets it apart from all other museums in Lebanon. While Beirut typically acts as the hub of museums in Lebanon, Nabu is located roughly 60 kilometres away from the country’s capital. Visitors may often times visit for its seaside appeal rather than the art itself, and that may be the museum’s strongest asset.

Being tucked away in an obscure location, made famous after the museum’s opening, helps create a stable and tranquil space for art and culture to blossom. So while visitors come for the location, they are in fact helping foster a safe space for artists. They are also reclaiming a public space that has long been denied to people by businessmen and private industries: the Lebanese coast and beach. With entry to the museum being free, Nabu makes both art and its location accessible.

In a country of ever-present turmoil, Nabu provides a sweet escape for some and a haven for others. Whether you’re visiting to enjoy the art or enjoy the scenery, the visit is well-worth the drive.