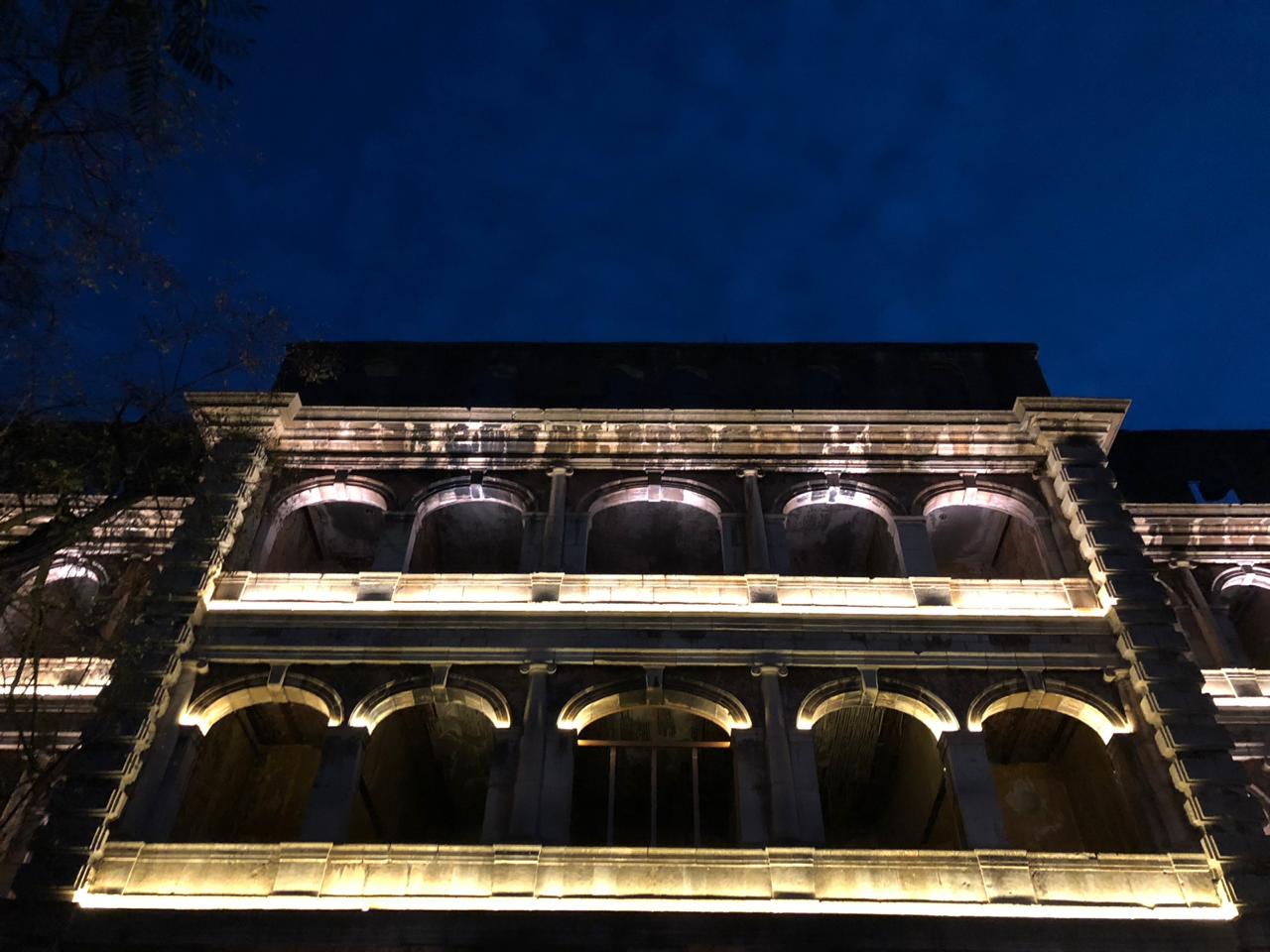 Entrance of the Grand Sofar Hotel, lit up for the Tom Young exhibition in 2018. (Lynn Sheikh Moussa)
Home
Better Living

The Grandness of the Grand Sofar Hotel: From Umm Kulthum to the Civil War and Beyond

Thinking of all the ghostly figures that once roamed the halls of the Grand Sofar Hotel is easy. If you look hard enough past the musty corridors and torn marble floors, you could almost see Umm Kulthum taking a stroll past you with her signature sunglasses on. If you pick up one of the betting chips from the worn-out poker table or grace the former ballroom, you could almost hear the socialites whispering about being joined by Omar Sharif, Sabah, or Abdel Halim Hafez during one of the many glamorous evenings of gambling, music, and dancing at the hotel. If you take a moment to rest by the crumbling stairway rails, you could almost feel the tension between politicians and spies coming to covert agreements at the first Arab League meeting.

The battered hotel once hosted everyone who’s anyone. Diplomats, celebrities, and social-climbers from across the Middle East would seek the glamour and gossip of the Grand Sofar Hotel, as well as the occasional good night’s sleep in one of its 75 rooms. Before it was looted and critically damaged during the Lebanese Civil War, the massive structure held prestige as one of the most famous hotels in the region. After being abandoned for 43 years, the striking landmark now stands as a resurrected space of collective memory. The Grand Sofar Hotel returned in September 2018 as a cultural and social events venue.

The Grand Story: The History of The Grand Sofar Hotel

The Grand Sofar Hotel was designed and built in 1892 by Alfred and Michel Sursock, members of one of the aristocratic “Seven Families” of feudal lords and estate holders that constituted Beirut’s high society for decades.

Situated in Aley District’s Sawfar (or Sofar, for consistency) village, the hotel sat opposite an old train station along the old route to Damascus. Currently, the hotel sits across 28,000 square meters of land and is valued at $14 million.

Recollections of the hotel paint it as a place of austere grandeur and a hub for entertainment. The hotel received the country’s first gambling license and housed Lebanon’s very first casino. A large terrace was added in the 1940s and would later on be converted into a movie theatre. Different objects, rescued as remnants of the hotel and used by British artist and activist Tom Young for the 2018 exhibition that would reopen the hotel as a public space, hint at the hotel’s lavish past: the bare essence of a grand piano, a dusty roulette table in an empty room with cragged walls, a tangled mess of telephone cords, and old ledgers of guests staying at the hotel.

The hotel was eventually abandoned in 1975 following the start and chaos of the civil war, taken over and used as the headquarters of  the Syrian army. The railway closed. A new highway was built to link between Lebanon and Syria. Because of these developments, the hotel and its village would lose their relevance. The past few years would change that.

The Grand Resurrection: The Reinvention of the Grand Sofar Hotel

Roderick Sursock Cochran, the grandson of Alfred Sursock and one of the owners of the hotel, had other plans than simply letting the hotel sit and rot. Cochran owns half of the property, while five of his female cousins own the remaining half.

He began its restoration in 2014, fully aware that the space “can never become a hotel again” but hoping it would become a space for celebrations and cultural events. Today, you could book your weddings and galas at the hotel.

Cochran spent thousands of dollars on ensuring the structural integrity of the first floor of the hotel, restoring the ceiling by adding wire mesh to its beams and paving the terrace with both new tiles and used patterned ones purchased from old houses. Cochran also added a gate and fencing, waterproofed the roof, and added functional electricity to the hotel. Restoration remains incomplete, and still requires hundreds of thousands of dollars.

Cochran also invited Beirut-based British artist Tom Young to take up residency at the Grand Sofar Hotel around the same. Young, also known in Beirut for reviving a disused empty mansion with his “At the Rouse House” exhibition in 2014, would eventually paint 40 imagined scenes and stories of the hotel on canvas. He settled in Sofar and found inspiration in old maps and photographs from the Arab Image Foundation, books on the hotel, and other archival material.

His 40 paintings would be hung up in the Grand Sofar Hotel’s first floor four years after he took up residency. The hotel opened to the public last September, through Tom Young’s free and immersive exhibition curated by Noor Haydar, for the first time in 43 years.

It’s not just nostalgic, although strolling in the halls of the Grand Sofar Hotel does feel like stepping out of your everyday troubles into a past life of roaring glamour –or a terrible world of war, depending on where your mind takes you. These spaces matter. They act as physical and, sometimes literal, concrete connections to our past. They safeguard our memories, allowing us to learn and grow from the past by bringing to light the key incidents and events that defined the lives of our ancestors.

The Grand Sofar hotel stands as a rich cultural landmark, one that rallies us together as a community around our shared history. Its preservation and renovation, which pays tribute to the original conditions of the hotel while making it usable, grants us access to a history that might have otherwise been lost. History makes more sense, and becomes ever-more appealing for us to learn about, when we can see its architectural remnants.

The hotel might also one day contribute to the local economy of its village, bringing more heritage tourists to Sofar and creating different jobs along the way. Countless of studies have demonstrated the tangible economic benefits of preservation efforts.

Different groups of people might dispute the hotel’s historical connotation. Some might see it as a key meeting point of some of the world’s greatest past leaders. Others might see it as a terrible reminder of a war they would rather forget. Perhaps the Grand Sofar Hotel is both, but its importance is asserted in its ability to rally such important, different memories and tie them down to one place. The Grand Sofar Hotel mattered, and still matters.