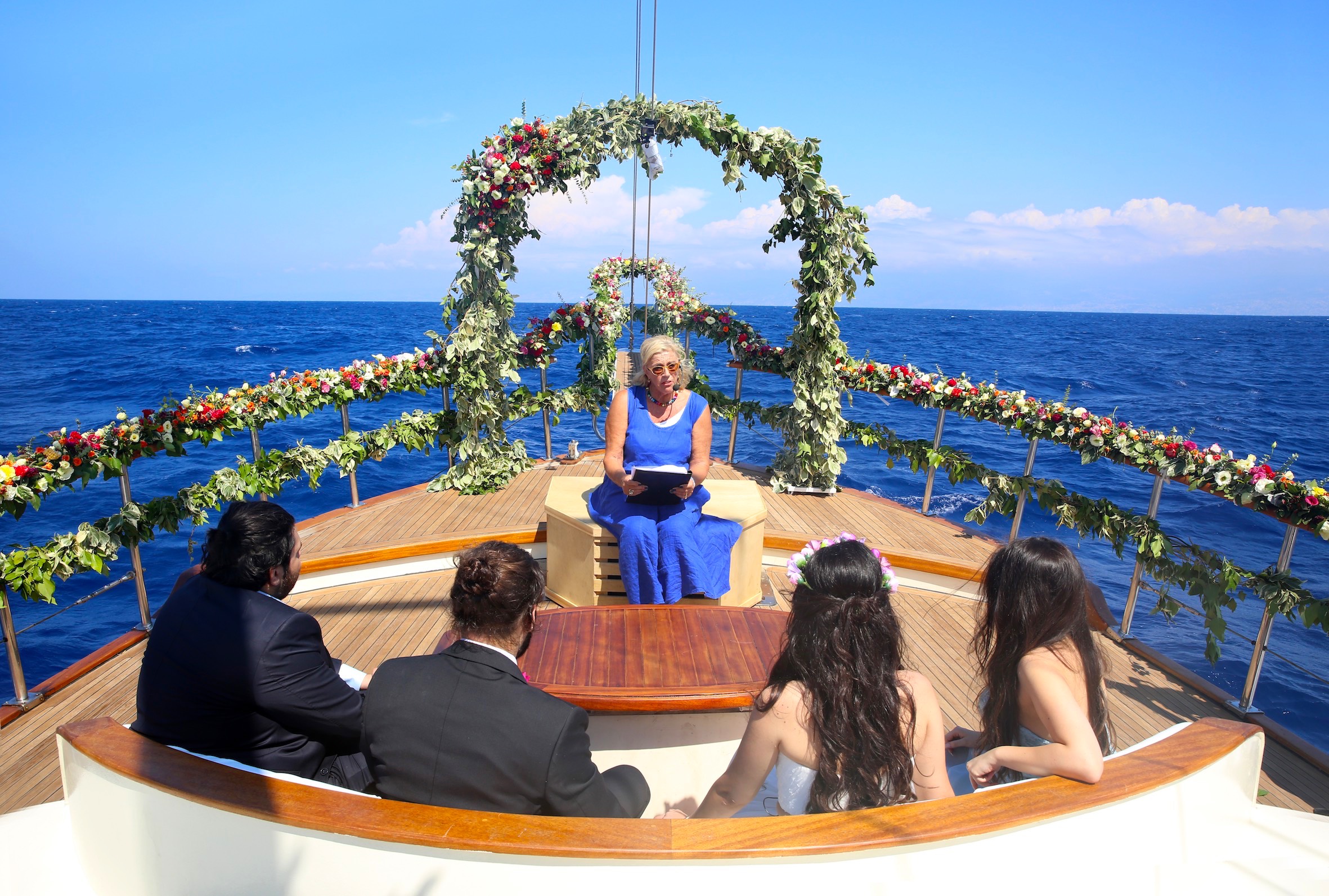 Civil marriage finds its way onto the Lebanese horizon

A civil wedding ceremony was held 22 kilometers off the Lebanese coast on September 8, bringing unconditional civil marriage the closest it has ever been to Lebanon. The wedding, a world’s first, took place in international waters, and thus was not subject  to Lebanon’s marital laws.

The September 8 wedding ceremony took place on a boat as part of Absolut Vodka Lebanon’s “Civil Love” campaign. This wedding marks the closest unconditional civil marriage that has ever taken place near Lebanese shores. Tarek Mallak and Anastacia El Hajj were selected by the “Civil Love” campaign to be married civilly in this landmark wedding, without having to alter their official documents. Attendees included friends and family of the couple, in addition to MTV’s Pierre Rabbat and blogger Maya Acra.

This was, however, not the first attempt at a successful civil marriage ceremony. After the discovery of a legal loophole in 2013, a couple was wed on Lebanese soil, under the condition that they omit their religious category from official documents. However, this legal loophole resulted in the loss of the couple’s civic rights, such as the right to vote and the right to work in public institutions.

After the formation of a new government later in the year, the practice was halted by Nouhad Machnouk, the new Minister of Interior at the time.

Civil marriage has seen considerable resistance over the years. The fight for the legalization of civil marriage dates as far back as 1951. In 1957, then-leader of the Lebanese National Bloc, Raymond Edde submitted a proposal to Parliament to establish civil marriage in Lebanon. This was followed by a proposal for a civil personal status law in 1972, submitted by the Democratic Party. Both were rejected by both incumbent parliaments, respectively.

Following the end of the Lebanese Civil War,  attempts to legalize civil marriage were also futile. In 1998, the then President Elias Hrawi’s bill for optional civil marriage was not referred to Parliament despite cabinet majority approval, and came as a result of the last minute intervention of the country’s religious leaders. Years later in 2011, The Chaml Association submitted a draft for a civil personal status bill in conjunction with 14 other local NGOs, and it was placed on the parliamentary agenda for March 18 of that year.

The newly-weds from the “Civil Love” campaign believe that civil marriage can be a way to unite people from different faiths. This sentiment is felt strongly by many, considering the long history of sectarian divisions in the country.

The “Civil Love” campaign is a celebration of social union between two individuals regardless of their backgrounds. The campaign was launched online in June, with the hopes of gathering people to sign the “Civil Love” declaration and urging them to spread the message of unconditional love. The declaration reads statements such as, “We believe that when we fall in true and mad love, we no longer see first and last name because together, our heads turn towards the future.” It is an extension of the vodka brand’s ongoing journey of positioning itself under the motto: “Create a better tomorrow, tonight.”

The advertising campaign, which included an art exhibition, a party, and social media posts hinting at a grand finale, was concluded with the wedding on the “Civil Love” boat.

“With ‘Civil Love’ we seek to communicate that ratifying civil marriage in Lebanon could heal divisions amongst our society. Inter-faith love has the power to unify Lebanon. Bringing civil marriage the closest possible to Lebanese shores is a statement that we hope sparks this conversation nationwide,” Rita Harbie, Associate Creative Director of local advertising agency Interesting Times, told Beirut Today.

On the same day, Joumana Haddad, who ran for elections earlier this year, officiated the ceremony of a couple who had a civil marriage outside the country. The couple had their paperwork done in Cyprus and returned to Lebanon to celebrate with friends and family in Tyre.

This growing interest in civil marriage as a practice to be legalized in the country could be a signifier of change to come. Local groups continue to lobby for the cause.

Shrinking 264 kilometers to 22 kilometers, the campaign brought unconditional civil marriage the closest it has ever been to Lebanon, and pushed for legalizing the practice on Lebanese soil without forcing couples to give up their civil rights or travel to a foreign country to commemorate their love.