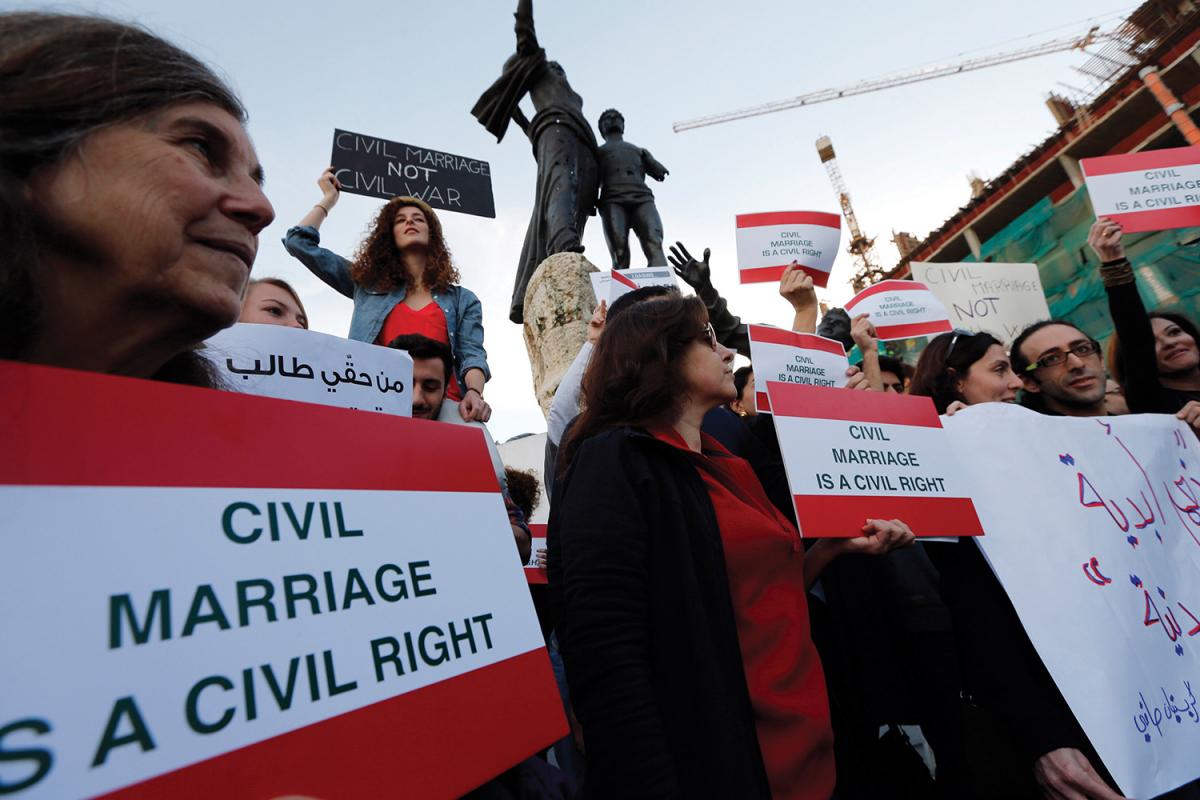 Between Religion and State: Civil marriage remains an elusive goal

“Daniel and I had to elope,” said Hala Chami,  her eyes welling up with tears she could not hold back. “I’m a Muslim and he’s a Druze. We met at work four years ago and decided to get married.”

Shortly after, the couple could not handle the situation any longer, and to the distress of both their families, decided to elope and move to Dubai. Both Hala and Daniel are still out of contact with their families.

Chami and her partner are amongst the many young couples whose parents are in fierce opposition to legalizing civil marriage, despite the efforts of several activists and organizations fighting to make civil marriage legal in Lebanon.

“I think the political scandals in the country have reached new heights, forcing the older generation to loosen up their sectarian grudges,” explained Lara Hayek, who recently returned from her cousin’s wedding ceremony in Cyprus. Like many other Lebanese couples, her cousin left Lebanon to pursue a civil marriage in Cyprus.

Ever since the Ottoman era, civil marriage has been banned due to sectarian and political reasons. This has forced several couples to wed abroad, and then return to Lebanon to register their marriages as “foreign.”

Recently, The Ministry of Foreign and Expatriate Affairs in Lebanon declared that 560 Lebanese civil marriages took place in Cyprus in 2014.

Despite the many obstacles couples continue to face, many remain successful in their attempts at civil marriage and are spreading awareness amongst future generations. Nourhan Hussein is one such individual whose parents are from different religions. Hussein expresses comfort with the thought of civil marriage.

“My mother is a Christian and my father is a Muslim,” she told Beirut Today. “When I fell in love with a Christian guy, my parents encouraged me to opt for civil marriage.”

Hussein also stressed the fact that both she and her significant other identify as religious people who do not wish to convert, which left civil marriage in Cyprus as the ideal solution.

Unfortunately for others, the solution is not always this simple. Civil marriage continues to be perceived as a challenge to religious authorities in Lebanon, putting it in open disagreement with continuous campaigns from religious forces who describe the practice as “immoral,” and at times “heretic.”

Sheikh Mohamad Farhat spoke with Beirut Today on the matter.

“Islam is not against love. Rather it’s a religion with a specific constitution that dictates how one should perform the religious contract to ensure harmony and stability between the couples,” he explained.

On the other end of the spectrum, supporters of civil marriage in Lebanon emphasize that it does not go against the ideals of religious unions in any way, nor does it prevent those unions from functioning.

While the solution has been to go abroad, some individuals are instead advocating for a new law to legalize the practice in Lebanon. In fact, many organizations have already began work on this matter.

In November 2017, the Beirut Bar Association unveiled a draft law that, if adopted, would make civil marriage possible in Lebanon.

“The millions of dollars that the Lebanese are spending on weddings, gifts, resorts, and hotels in Cyprus could be otherwise spent in Lebanon and would help boost our economy,” Lawyer Nezar Sayegh told Beirut Today.“At least [with this law] they can avoid traveling to other countries and conclude a civil marriage in Lebanon.”

In 2003, Dar Al Fatwa released a fatwa (religious verdict), stating that “every Muslim official, whether a deputy or a minister, who supports the legalization of civil marriage, even if it is optional, is an apostate and outside the Islamic religion.”

The fatwa acts as an indicator of how severe the opposition to civil marriage is in hindering efforts seeking to legalize the practice in Lebanon and shunning individuals who wish to practice it.


Four years ago, Nidal Darwish, a Sunni Muslim, and Kholoud Succariyeh, a Shia Muslim, dropped their sect from official records and took advantage of a legal loophole in order to get a civil marriage.

Up until 2009, identity papers still stated the religion of their owners, which most still do today. To benefit from the legal loophole before the papers were signed, the couple had to ‘detach’ themselves from their religious sects by replacing their old ID cards with newer ones that did not state religious affiliation. Darwish and Succariyeh then applied to have their marriage recognized. After receiving no reply from the Department of Justice for two months, the couple reverted to the media

The couple initially received a refusal for their request, only to be given a final approval later by the Lebanese government. Eventually in 2013, Nidal and Kholoud were announced the first couple to pursue, and attain, a civil marriage in Lebanon. Unfortunately for many other couples, they remain the only civilly wed couple in the country.