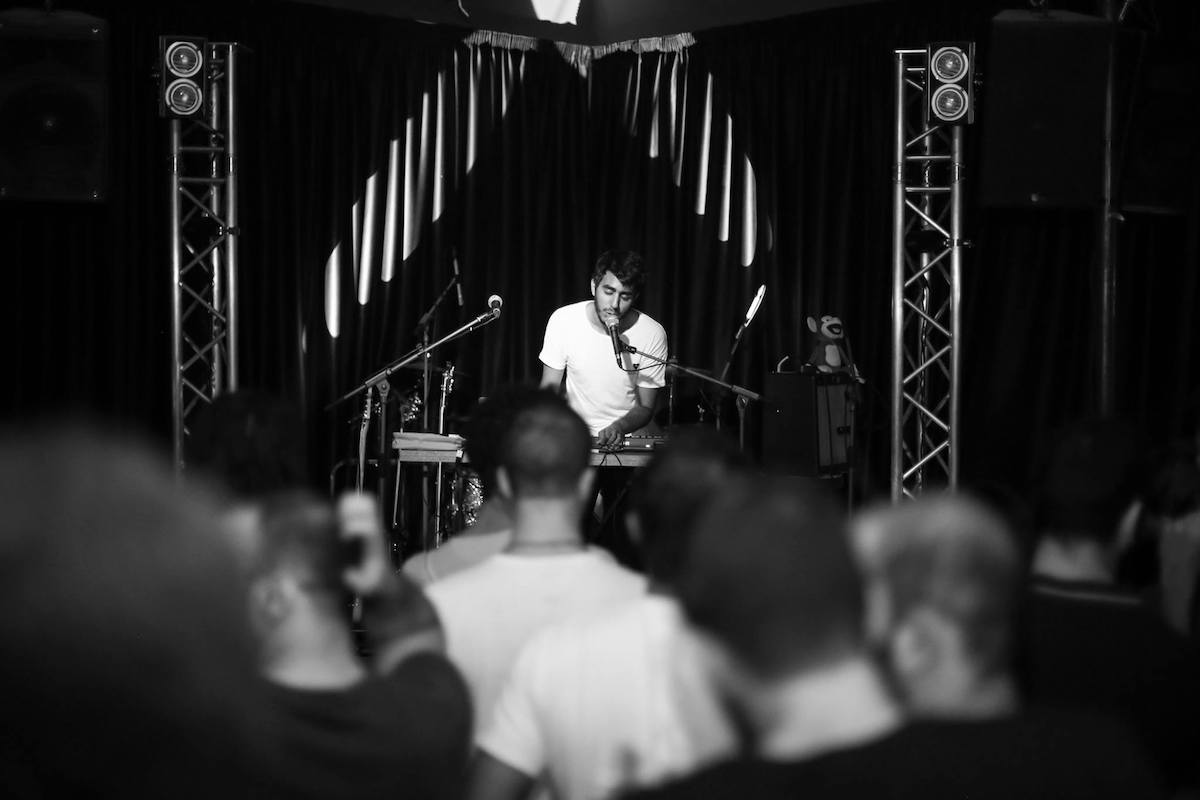 Day None on technology and synthesizing interesting music

It’s the quiet ones you have to look out for, and that’s the case with Day None. His synthetic compositions almost seem to glide, constantly and fluidly shifting to deliver new and interesting sounds. The twenty-two year old electronic artist is thoughtful and contemplative about his music as he discusses it from the other end of a green picnic table in the American University of Beirut, where he’s just finished studying Computer and Communications Engineering (CCE).

The major couldn’t be more fitting for Samir Ghobril. The self-identifying “tech guy” creates music that distinctively sounds like the result of days spent virtually tweaking and fine-tuning every instrument and sample used.

Day None cracks witty jokes about how he’s been combining music and technology since the tenth grade, which is around the time he started messing around with GarageBand on his brand new MacBook, where he “created some horrible music for a few years.” These jokes are spoken softly, with a hint of uncertainty that disappears when he begins to talk about his passion for discovering, and making, good music.

“When I went into university, I had an existential crisis and started thinking about what I really want to do. I always went back to music when I thought about it,” Day None laughs. Behind him, students who have probably experienced similar crises walk to and from their classrooms.

It’s a warm afternoon, but we are shielded from the sun by the branches of a large Banyan tree with glossy green leaves. Day None creates sounds as complex as the tree we sit under, which begins its life by enveloping another plant and eventually applies enough pressure to kill and decompose its host. Botany lessons aside, Day None creates loose, ghostly compositions with a rich set of sampled work, crispy drum snares, and drifting background vocals.

His two EPs, “demonstration” from October 2017 and “there’s nothing wrong with me.” from February 2018 marked the most recent culmination of his decision to seriously pursue a career in music instead of working on it on the side.

Why’d you get into electronic music specifically?

I guess I’ve always been a tech guy. I learned how to program when I was really young, on my own just because I wanted to know how to make video games, and then I went into CCE. Everything was very tech-related. I loved technology from the start.
Although I’ve taken piano lessons, it’s never been interesting to me to be technically good at one instrument. It’s nice to hear, but I’ve never had that passion to really get good at that. Also, whenever I listen to music, I just listen to the sound of it more than the lyrics or words. I just listen to the music, the instruments, and what it sounds like. Electronic music is basically that. It’s trying to make interesting sounds and interesting songs from these interesting sounds.

And that actually translates into what you’re working on. I’ve noticed that your vocals are very subtle.

I try to use the vocals like an instrument, more than anything. My lyrics aren’t lyrics. I’ve never written down any lyric. I just sing something over the song and then that becomes the lyric of the song.

Speaking of tech and the fact that you’re in computer engineering, do you integrate your music into engineering or vice versa?

I guess I do both, kind of. When it comes to engineering into music, there’s something called “generative music”, which is basically when you program something with a set of rules and then it makes music based on these rules. I’m very interested in these things, so I try. The other way around, if I’m thinking of something doing that’s engineering-related, I always try to think of a music project to do. But, not too much. I just focus on the music as much as I can.

Do you think that you’d want to focus even more on the music by, at some point, giving up engineering?

Yes, if I can, definitely. My goal is to be able to make a living off of music only. If I can get there, I’d be very happy.

That’s tough.
I know it’s tough, but it’s a reasonable goal. I don’t care about becoming Kanye -and a Republican. If I can just sustain myself with music, I’d be happy.

You’ve recently released two EPs less than six months apart. Each one of them has this distinct kind of feel to it. Was there a difference in the feedback you received for them? Or anything that surprised you in the process of making them?

Something about these EPs is that I didn’t consciously try to make a certain sound for them but, I guess, what came off depended on the period of time I was making the music in. That’s what differentiated them. Also, the second EP technically sounds better because some technical things were done better, but I wasn’t trying to follow a certain theme or a sonic style. I do want to do that at some point, but when I feel like I can do it really well.

What kind of sonic style would that be?

Something I’d love to do, and I’m really thinking about it, is to make a record or EP that’s just heavily-based on the piano and a few samples that would be just Arabic samples, vocal Arabic songs. It’s like choosing a palette when drawing, but for songs. That’s one idea I’ve had but it needs a lot of good songwriting because I can’t just put interesting sounds, because I’d have to minimize those as much as possible in that case. That’s one idea, but I don’t know when I’d feel confident enough to go through with that.

How about right now? What do you plan on doing next?

What I want to do now is, I have a bunch of songs that I’ve worked on before and I’m just going to release them one by one. I’ll fine-tune them a little bit and just do that, and try to experiment with different sounds. What I really want to focus on is my live performance. I want it to look more like I’m performing. For example, there are these drum pads that you can get and you can play samples with those. I want to make it look more energetic and more immersive. I might also work on more visuals that can go along with my music. That’s where engineering could go in, because there’s something I could do where I program the lighting based on what I’m playing.

Let’s talk a bit about influences. Do you think your music or your creative process has been influenced by Beirut or the local scene?

I think initially something that pushed me to go for it is seeing the existence of the music scene. If there wasn’t this music scene that’s, what do we call it, not this mainstream Arabic music scene, there wouldn’t have been anything that really pushed me to really go for it. Other than that, I try to find sounds that have a shared identity with Lebanon or I try to sample Arabic songs or to put in some oriental drums and vocals. I try to do that often because I like it and it gives off a certain feeling that people from this region can relate to, more than elsewhere, which I like. Specific musicians, I can’t think of anyone in specific right now, except Who Killed Bruce Lee. I’ve loved them for so long, so I always feel like “Oh wow they’re from Lebanon, and they’re doing fine.”

I can also talk about international influences. Names I really think of that have really influenced me, there’s Nicolas Jaar. I think that, in a few years, they’re going to study his music in the same way we study Bach’s music now. It’s really genial because there’s something happening at every second and the sounds he uses are electronic but they still sound organic. It’s perfect to me. And then there’s also Jamie XX, who I really idolize. There’s also a lot of hip hop influences. They don’t sound as apparent as electronic influences, obviously, but it is there. Sometimes I try to give off that vibe, it mostly shows in drums.

Is there someone you’d really like to collaborate with?

Going back to the idea that there’s not a lot of lyrics in your songs. Considering that lyrics are sort of what help provide a linguistic aspect to music, do you have difficulties in coming up with the right titles for EPs or songs?

Yes, I do. Very much. Some titles I really hate from my songs, especially from the first EP. The titles were just, whatever. “trip” was the name of the first song. But, how I think of it now is that, especially the songs that have no lyrics as all, the title has a really important purpose, which is guiding listeners, or what they’re going to think about when they listen to that music. So if there’s a title that sets something and then they listen to music that kind of gives off an emotion that’s related to that title, I feel like that’s how I could express that. I feel it is important but I still suck at it, a lot.

So how do you do it? How do you express that?

I don’t really know. For example, “sharp and dull” was called that because there’s something in the lyrics that’s an oxymoron, and sharp/dull are an oxymoron. So that was it, “sharp and dull.” Some songs, there’s just a sample or something I say and I just try to find a word and put it in the title. There’s something I really like that Lorde did in her last album. There’s a song called “The Louvre,” and basically “The Louvre” is said just once in the song in some verse, according to what I remember, and I like that, taking something that’s not the refrain or chorus. I like taking something that’s really minor but that is related to the whole thing. I like doing that.

The worst part is that, sometimes my songs have a lot of things going on in them, and I have to decide what I’m going to perform and what I’m going to let happen on its own. I don’t like letting anything happen on its own. I don’t like changes happening just automatically when I’m playing something, so I try to minimize that as much as possible but at some point, I need to balance it out because I can’t be doing everything. And that’s the hardest part, trying to find that balance so that I’m not not doing anything but also not ultimately confused and not knowing how to do anything.

Singing has never been my strong point, neither in my songs nor in my performances. I just do it as a sound, basically. I’ve become less nervous about it because, in some ways, it’s the easiest part because if I want to say a word, I’m just going to say that word. It’s easy to do that. I just don’t think too much about it anymore, how I sound. I let the music be in the foreground more than my vocals.