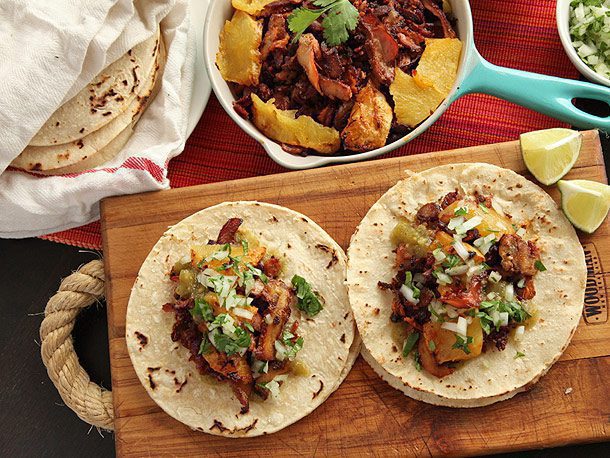 Mexican food produced outside Mexico differs exponentially  from what is actually consumed in Mexico. This is mainly due to the fact that we rarely eat the hard tacos (they don’t exist) nor the yellow cheese. Even if we do eat yellow corn, we don’t usually prepare it with our tacos. In Mexico, there are 64 different types of corn, but yellow corn is the most widely known variety. With corn tortilla, the Mexican gastronomy brings to life the famous tacos, a Mexican dish that  is recognized world-wide. Its most famous taco de pastor is served  in all taquerias (taco shops) and traditional food restaurants.

The taco de pastor was born out of the fusion of the Shawarma and Mexican gastronomy, approximately during the 1960’s when a big wave of Arab families arrived to Mexico (to the city of Puebla). This tradition is evident in the food’s name. Tacos al pastor, which translate to  “shepherd’s tacos”, harkens back to Mexican association of Lebanese with the office of grazing animals . Yet, the recipe had several changes from the original shawarma i.e. the type of bread, meat, spices and sides to go along the plate. In Mexico, the tacos al pastor are served with marinated pork meat, corn flat tortilla, and decorated with pineapple chunks, parsley, onion, hot sauce, lemon, and salt.

“In 2011, the Turkish Döner Kebabs Manufacturers Association recognized Nurman as the official creator of the dish that was derived from Mexican tacos al pastor. (Medina, 2017). Despite everything, the uncertainty is still present and different stories about the creation of this style of taco come to life almost every day. While some investigations mention the influence of the Lebanese shawarma, other sources point out to the Turkish Doner Kebap or the Greek Gyros. However, Mexicans can not deny that no matter who has helped inspire the creation of tacos de pastor, they are simply one of the most delicious cuisines in the country. On the behalf of Mexicans, I am certainly grateful for the fusion that gave life to one of the most famous and consumed dishes in our country.

There is no doubt that the gastronomic culture of a country is representative of it, but it is undoubtedly a recipient of the delights of other countries. Today, there is such a revolutionizing form of globalization that it impacts the way we live on a daily basis, and it affects everything we do which can extend to even the food we eat. For example: pizza, sushi, hot dogs, and donuts were all created by immigrants in other countries. These were adapted to the local gastronomy and eventually exported globally so that we could enjoy them. It is important to know that our lives are definitely connected. From something as simple as being able to go to a Pizza Restaurant close to our home, office or school without having to travel to Italy, or to simply enjoy some delicious Mexican tacos in downtown Mexico.

Mexico’s unique gastronomy can open doors to an entirely new culture. It gives one the chance to appreciate his/her own traditions and to make one more receptive to diversity. I invite you to go to a Mexican restaurant, chat with the families or people who opened the restaurant, and know more about its history.

Let’s help make this world an infinite-way street, and eat some tacos while we’re at it!