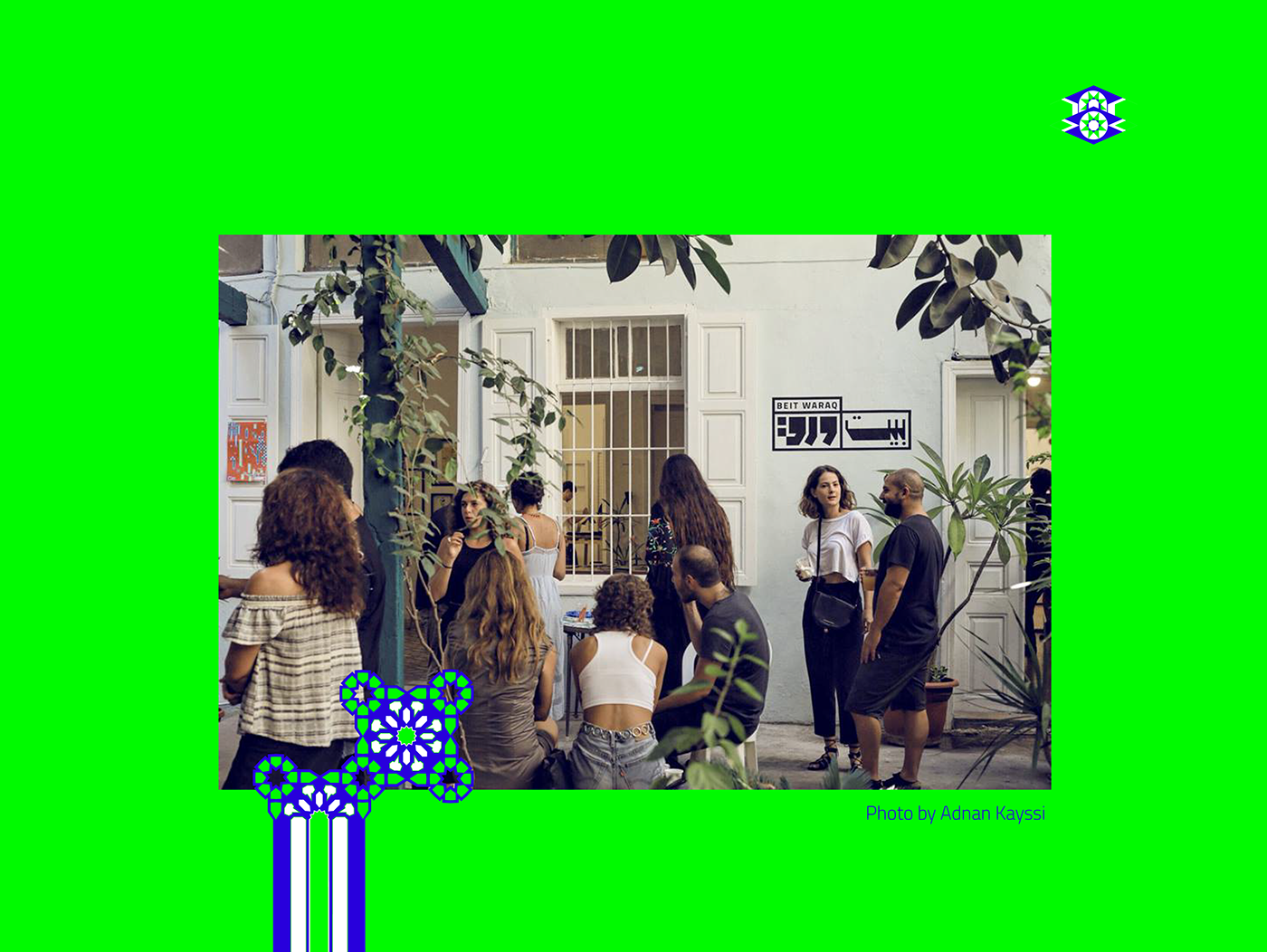 Photo Via Beit Waraq on Behance

Beit Waraq – A Journey Towards a New Artistic Discourse

Beit Waraq is a project initiated in 2012 by Waraq, a non-profit organization that supports graphic art practices through “education, research, production, and publishing”.

The space, which fits the definition of a community space, is based in a residential neighborhood in Ras el Nabeh and is dedicated to the promotion of the art of illustration, printmaking, design, and animation. All kinds of workshops, publishing, and educational activities are held in this space. Beit Waraq is also an incubator for visual arts studio Studio Kawakeb.

“When we started [working on the project] in 2011 it was a different life, different ideas, different world almost,” explains Hussein Nakhal, the project’s Creative Director. “2011 was a very spontaneous phase where we found this house: an old Lebanese house… and Beit Waraq founded itself through this house and the idea behind [it] is that it has multiple ateliers and facilities”.

The project went through many phases, particularly influenced by the Lebanese context and the chaotic nature of the country’s sociopolitical circumstances, most notably 2015, the 2019 uprising, the Covid-19 pandemic, and the Beirut Port explosion.

Constantly reassessing and reevaluating, Nakhal explains that the group’s work was never characterized by any type of “rigidity,” aiming to always keep it smooth and flowing with the country’s evolution and the artistic scene’s needs, striving to always contextualize their artistic ingenuities.

The project’s 3rd edition of “Tabaan, the print market” was filled with fluorescent art. It ran from the 16th of December until the 22nd.

Tabaan is the name of the print market during which new, alternative artwork is shown and sold. The play on words between the Lebanese word “Tabaan,” signaling strong affirmation, and “Tabaan” which comes from “Tiba’a” meaning printing, is meant to signify an affirmation and a celebration of print.

The group has a historical path of working using traditional techniques, such as silk screen printing, while at the same time deploying digital artmaking practices, effectively combining traditional printing culture with the efficiency and speed of digital technology. This is made distinctly clear with the risograph printing machine.

Traditional alternative printing mechanisms such as silk screen printing relied on the use of silk screens, photosensitive material, the application of UV lights and cooking processes to create artistic stamps and creative outputs. The risograph applies similar concepts from a macroscopic perspective, with the disposition of drums and banana leaves, not to mention its entirely digital aspect, which doesn’t require the manual intervention of the designers.

The project’s Executive Officer David Habchy explains that Tabaan is not just an event concerned with sales.

“It’s an exhibition for people to see the possibilities of risography, because we never saw it in this country before,” he said. “This event ‘Tabaan’ came to demonstrate what are the possibilities for the next phase, because in the next phase, the whole service of riso-printing will be available for the public. So, designers, illustrators, and graphic artists can come and print their [work] on this machine.”

“[The risograph is] not just a machine, it’s a network around the world,” explained Habchy. “You have a map of risograph studios around the world […]. So, we became part of this network. It’s a very celebrated machine within the artist community because it creates this imperfection.”

Habchy further said that the facility is not limited to the community in Lebanon, as people coming from abroad can now access this resource, and the goal is to further connect with international bookfairs, markets, and various festivities. Accordingly, the community that is being generated is not restricted by any geographical or territorial constraints. Already, the project immediately captured the interests of various studios around the world, who promptly agreed to host Waraq’s collection and exchange experiences.

As promised, Waraq’s third edition of Tabaan featured unique color combinations using risograph technology. While limited in terms of the colors one can use simultaneously, the risograph generates combinations and variations of color mixes that easily capture one’s attention.

For this purpose, the organizers decided not only to showcase the output and results of their artwork, but also the possible inputs one can have bestowed beforehand, highlighting the range of possibilities available for artists using only a limited number of colors.

“Every visual has behind it [many] possibilities,” said Habchy. “It’s a demonstration of the possibilities of risography.”

The list of artworks generated through the risograph and presented throughout the exhibition is long. From pictures and illustrations to notebooks and stationery, visiting the artistic space in person can help one understand more concretely what can be done through this unique medium.

After the event, as is the habit in Waraq, there will be an assessment, an evaluation, and a better understanding of the future prospects of the project.

What’s most probable however, is that future initiatives by the group will include “an educational experience,” explains Nakhal.

“Whether workshops or some sort of an academy… where we can teach riso-printing and the many other techniques we cover,” including how to come up with specific designs and the particular know-hows of the technique.