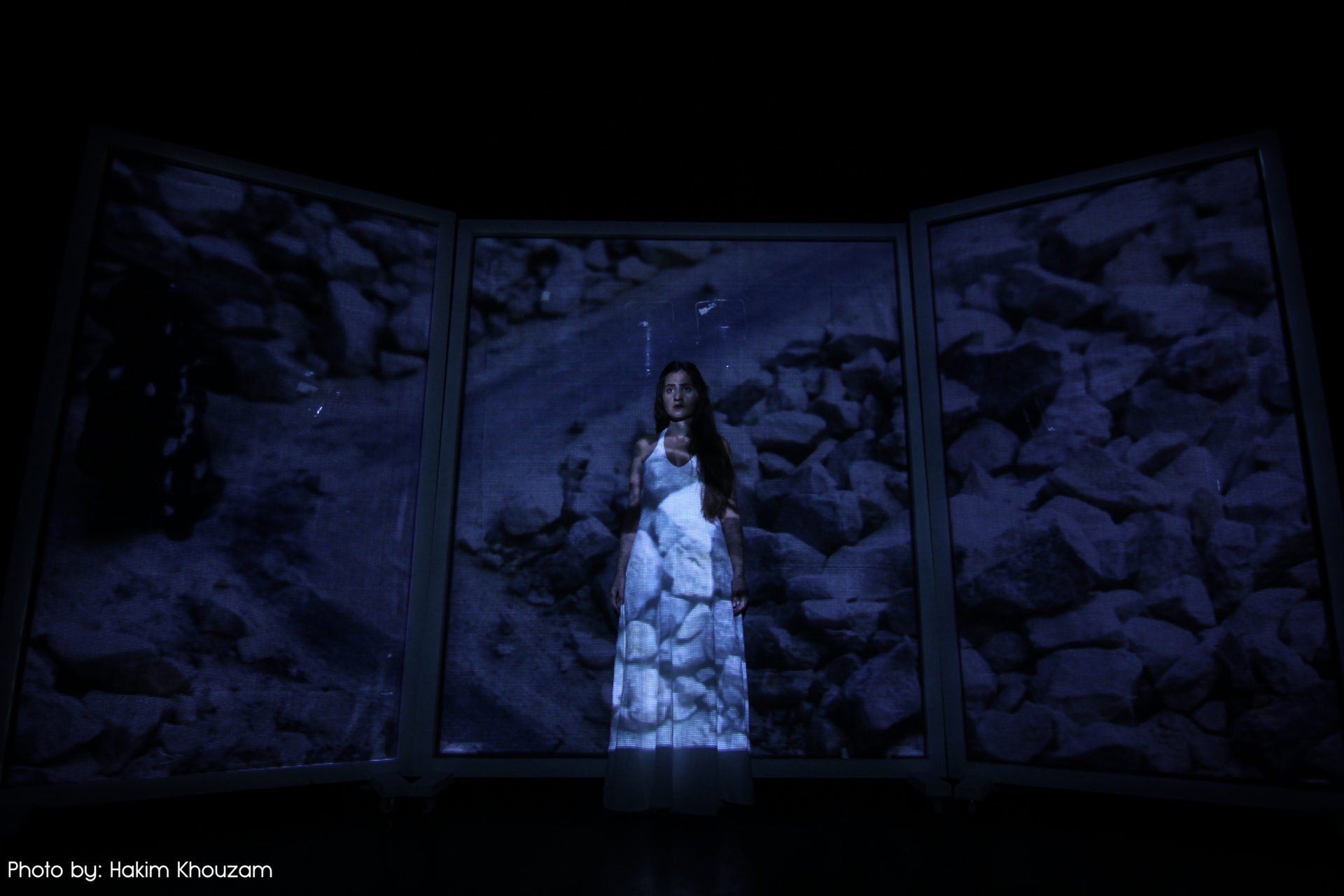 Arab Theater: A Message of Steadfastness in the Face of Crises and Wars

Arab countries, including Lebanon, have been suffering from a series of successive and multifaceted crises over the past years. These crises can take the form of military conflicts, cold wars, economic crises, in addition to the global pandemic, among other things.

But as the popular saying goes, “art is born from the womb of suffering and pain.”

Despite seeing an increase in artistic productions across the Arab world, specifically in theater and cinema, there remains an assumption that the artistic scene in the region is in decline. This begs the question, what is the state of theater in Lebanon and in neighboring countries?

“If I want to describe the issue from a personal point of view, we have always had, in spite of all crises, a difference regarding the level of production. [I don’t mean] in terms of quality, rather in terms of quantity, given the circumstances, and this is all by individual efforts,” said Jad Hakawati, one of the founders and theatrical and cultural director of local theater group Minwal.

“But what is surprising is that after the past two years, the theater is working in a very good way – there are a lot of shows, festivals, new platforms and alternative venues, and we are also seeing a good turnout.”

“It seems that after a period of crises, people need to go back to the theater and watch shows,” he added. “They need to go back to art in general, because it is what makes us present in the present, and it is an opportunity for people to meet each other regardless of productions.”

The Minwal Troupe was founded in 2014 in Beirut as a response for the need for concerted efforts in studying, strengthening, and developing frameworks for theatrical programs and productions.

The group aims to contribute to the increase and growth of high-quality Lebanese theater production, to create opportunities and to make room for artistic practices that support the role of the local young generation in defending their social and cultural rights, and to create a platform for private and public schools in various Lebanese regions.

“Theater, to us, is the ideal place for the practice of democracy,” said Hakawati. “Contributing to the Lebanese theater scene strengthens theater as a profession. In addition, our practice is also concerned with issues of identity and memory.”

Director of Monot Theater and Producer Josiane Boulos echoed Hakawati’s words about the state of theater in Lebanon.

“Many said that the Lebanese theater will not survive after the economic crisis and the pandemic, but we proved them wrong,” she said.

Boulos added that it is unacceptable for Beirut to only have three theater venues: Le Monot, Masrah al Madina and Sunflower Theater.

The shortcomings of the theater sector in Lebanon

When asked about the shortcomings of the theater sector in Lebanon, Hakawati mentioned three points he considers crucial for the sustainability of the sector: government support, dependence on ticket sales and support from some donors.

“In Lebanon, the three points have fallen, especially now with the financial crisis,” he said.

Hakawati says that theater has been supported by individuals and groups of people, rather than by the state.

“Not once was the state present to support us. Maybe it supports us in its own way, but we did not receive anything,” he added, saying that there are no cultural policies that define the rights, duties, and ways to sustain this sector.

Boulos added that, “we need support for scripts and a national theater.”

She wishes for televisions to air theatrical plays as it could have positive effects on the audience and the theatrical scene.

The Youth and Theater

Arab youth have recently started learning theater or cinema skills through workshops, lectures, and programs offered either by academies or non-governmental organizations. These skills can also be acquired in some university courses.

Regarding the situation of the Lebanese youth in the theater, Hakawati said: “As Minwal Troupe, we worked with a lot with youth groups, and it became clear to us that in areas outside Beirut, people – especially young ones – need exposure to different types of arts to then decide whether they want to continue in the workshops or stop. We witnessed a good turnout from this group specifically.”

Hakawati told Beirut Today that before suspending their activities in 2019 in conjunction with the October 17 Revolution and the economic crisis, Minwal’s work was divided into two parts: their own production, and programs targeting several categories, including training programs for the youth.

On the other hand, Boulos said that Monot is currently supporting young people during the crises.

“We open space for young men and women to present their projects, and we also produce several works,” she added.

“We, as Monot Theater, support them by renting our theater for cheap prices, producing plays and performing them, which in turn returns the profit to the youth working on these shows and plays.”

As for neighboring countries, Beirut Today spoke to Syrian-Palestinian film actor Nidal Jabr, who grew up in Jordan, about his experience in the theater and cinema.

Jabr began his cinematic career in 2015 after he gave his first audition for a foreign film. His 26 artworks varied between Arab and Western works, and between films and advertisements, and theatrical acting in addition to voice acting, where he is notable for his talent in imitating voices and embodying characters.

Jabr’s career serves as an example of the struggles and challenges faced by an artist of any kind in the Arab and Western world to reach the highs and passionate moments in art and theater.

Jabr became known for his role as “Jim” in the play “Al-Yasmina” directed by Joseph Karam and presented by Zaal and Khadra Creative Arts Company at the Theatrical Youth Pulse Festival under the patronage of Jordanian Minister of Culture Haifa Al-Najjar, with the support of the US Embassy. The play was performed in February 2022.

A new play featuring Jabr is called “Idrab” (Strike), presented by the Sin Troupe. It will be performed twice this month in Jordan’s Shams Theater.

Talking about his personal experience and comparing Arab and foreign works, Jabr said: “I do not think the issue is related to whether the work is Arab or foreign. There are some people who do not appreciate theater or art in general, and there are those who appreciate and follow them.”

“In the various works that I presented, I witnessed the effort and passion, it being from actors, directors, or the entire team,” he added. “It is possible that there are some artists who take their work more seriously than others, but I think that the most important topic is respect among the members of the team, and not to underestimate the profession and role of another based on their years of experience.”

For Jabr, the only major difference between Arab and foreign theatrical works is the usage of modern technologies. From his experience, foreigners tend to use human energies and talents, as well as modern technologies such as cameras and photography, while in the Arab world workers in this sector are still somewhat behind in keeping pace with technical development.

The pandemic’s affect on the theatre

According to Boulos, audiences have been increasingly asking for comedic plays.

“The audience has been asking for comedies a lot more than before [the crisis]. They no longer care to cry, but to laugh a lot,” she said.

Boulos mentioned that before taking over the management of Monot Theater, she had created an opinion poll in which she asked audiences whether they prefer crying or laughing – 95 percent chose to laugh.

“Therefore, in the Monot Theater programs, we focus more on comedy and less on tragedy,” she added.

Regarding performers, however, Boulos said that the lack of a solid theatrical sector and the little financial support means that actors have been focusing more on television gigs. The latter are supported by major Arab productions and therefore provide better pay than theater.

Hakawati added that another problem is that they are in constant conflict to prove that this is a profession, not a hobby or a piece of entertainment.

“Theater is more than presenting a product, rather it is also a statement and thought that is put into the works of art,” he said.

Echoing Boulos’ sentiments, Jabr said that many productions have stopped due to the pandemic. Some of them have been suspended until further notice, and some will be worked on soon, stressing that this period affected him and the sector in general in Jordan, although it returned to normal after the lifting of the COVID-19 restrictions.

Arab theater remains steadfast in the face of crises, epidemics and wars, embracing young people with the support and passion of the elders in this sector, bearing the message of survival and art.