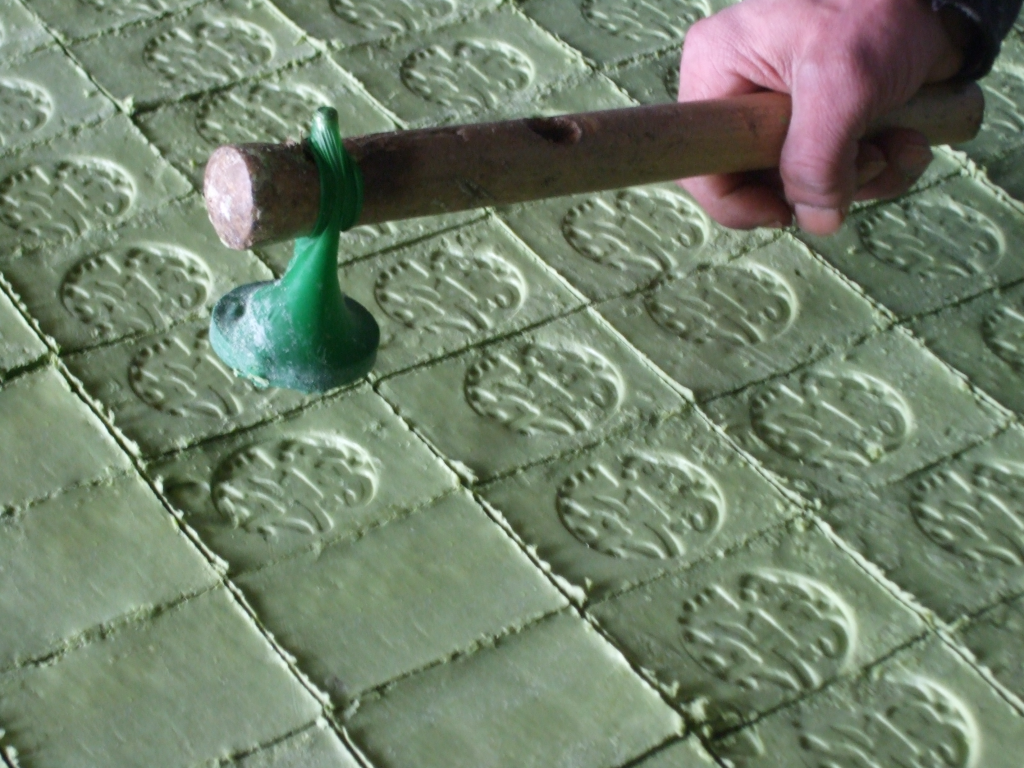 The Craftsmanship of Laurel Soap: A Success Story from Aleppo and Beirut to the World

“There is not a house in Aleppo that does not use laurel soap and that does not have local za’atar.” This is how Nawwar Rahmouni, an elderly Syrian woman living in Lebanon, characterized the people of Aleppo in northern Syria.

The Romans, Phoenicians and Europeans all used this soap, and both the famous Queen Cleopatra of Egypt and Queen Zenobia of Syria had both fervently purchased laurel soap.

Soap production began in the 13th Century AD. At the time, only the rich could buy soap because of high taxation on it up until 1853, when the tax was canceled and its price became accessible to everyone. Aleppo soap was not spared from European imitation: a French- manufactured soap was concocted to resemble it, under the name of “Marseille Soap.”

But Rahmouni’s ambitions do not have limits. Her project, Gharna Halabi, meaning “Our Laurel Aleppo,” has crossed Beirut and Aleppo to reach the Gulf countries, Europe, America, and China. In cooperation with her partner, Joud Makhoul, she has created dozens of job opportunities.

“I began the project when I was in Lebanon and was suffering from eczema. When I told my family, my father insisted on sending laurel soap with my mother on her way to Lebanon from Syria. When she arrived, I received the soap and my project began with a joke,” she said.

“When I asked my partner Makhoul what his opinion was upon posting a picture of the soap on Facebook as if to sell it. He was shocked by my suggestion, but he agreed to it,”

“I had a hard choice whether to use the laurel soap to treat my eczema, or to post pictures of it on Facebook to sell it to secure money to buy food, because I was undergoing a difficult financial crisis, so I chose the second option and began the journey in 2018,” said Rahmouni.

“We published a page on facebook and orders started coming in, so I communicated with my father to send a new order of laurel soap to me and we expanded the project. We have provided many job opportunities for Syrians in Lebanon, and the requests increased over time. We were able to promote the product on social media until we reached a large audience, and we spearheaded the discussion about Aleppo soap across electronic platforms.”

Regarding her coming to Lebanon, she clarified that she came to the country in 2013 to visit some of her family members, but that she could not return because of the siege, the conditions of the war, and the closing of roads, so she was forced to stay in Lebanon for a long period of time.

She began searching for work for a long period of time, and rented a house. The hardest days of her life were in this period, until she began her personal project.

Rahmouni took advantage of being in Lebanon to get her education.

“I finished on a scholarship from Spark, a Dutch organization that deals with refugees—even though I am not a refugee but a resident—and was accepted into the Lebanese International University in Beirut, and graduated with an excellent degree in 2019,” she said.

“Throughout my studies I was almost the eldest of all the students, because I stopped my education several years ago due to the war in Syria, but Spark gave me an opportunity to be a role model for the students. I began with Spark as a public speaker, and started to help students with their exams at a very high level, and proved my merit in the field as a volunteer.”

She explained that the economic crisis in Lebanon and rise in the dollar exchange rate adversely impacted her project. The number of workers dwindled, even though she was trying to establish the first Aleppo soap factory in Lebanon.

Rahmouni’s ambition did not stop there. She is seeking to be a consultant to help young men and women by providing the necessary support for their innovations, small projects, and for entrepreneurs, in addition to strengthening their bond to culture, history, and the traditional professions.

Rahmouni confessed that she has not introduced anything new to the soap itself, but has simply revived the soap and designed a set consisting of small towels, laurel soap, a bag, and a loofah. She initially added cotton swabs to the products, but these soon became bestsellers.

Laurel soap contains many of the minerals and phosphates necessary for health and youthful skin and hair, such as magnesium, potassium, phosphorus, a wide range of vitamins including A, C, E, and F, and unsaturated fatty acids.

Regarding the method of preparing the soap, Beirut Today met with Yazen S., a 54-year-old soap cook. He explained how soap is produced, and likened each soap to a “child who is nourished and cherished until mature and ready to wash away the dirt of life,” as he put it.

Yazen is an Aleppo native who inherited the soapmaking profession from his father. He explained that “the cold and dry weather in the winter and the hot and dry weather in the summer make Aleppo the optimal place to produce soap, as it is famous for this industry.” The best soaps are considered to be those that consist of at least 25% laurel oil.

“We pour natural laurel oil that gives the soap its value and distinctive smell into the ingredients, leave it for a few minutes on the fire, and then wait for the ingredients until they become completely cool. Then we filter the mixture after making sure that any impurities are settled at the bottom and that the soap has risen to the top. We cut the large soap bar into medium-sized cubes, and then we leave them for at least seven days until they have dried completely,” he added.

In 1999, the standard specifications for Syrian laurel soap were determined, which specified the percentage of olive pomace oil at 50 percent and other oils at 26 percent, including laurel oil. The specifications clearly stipulated that all of the oils in the soap should be vegan.

Olive pomace oil is produced by squeezing the leftover olive pomace after extracting table oil from it. It is an oil that is not suitable for human consumption, and is exclusively used in soap making.

The making of Aleppo soap, or any other profession that is customary and traditional for the Syrian people, will not be affected by the war, bombings, or asylum, as long as Syrians hold on to their roots and customs. When the opportunity is ready, they will take advantage of it to return to their motherland.