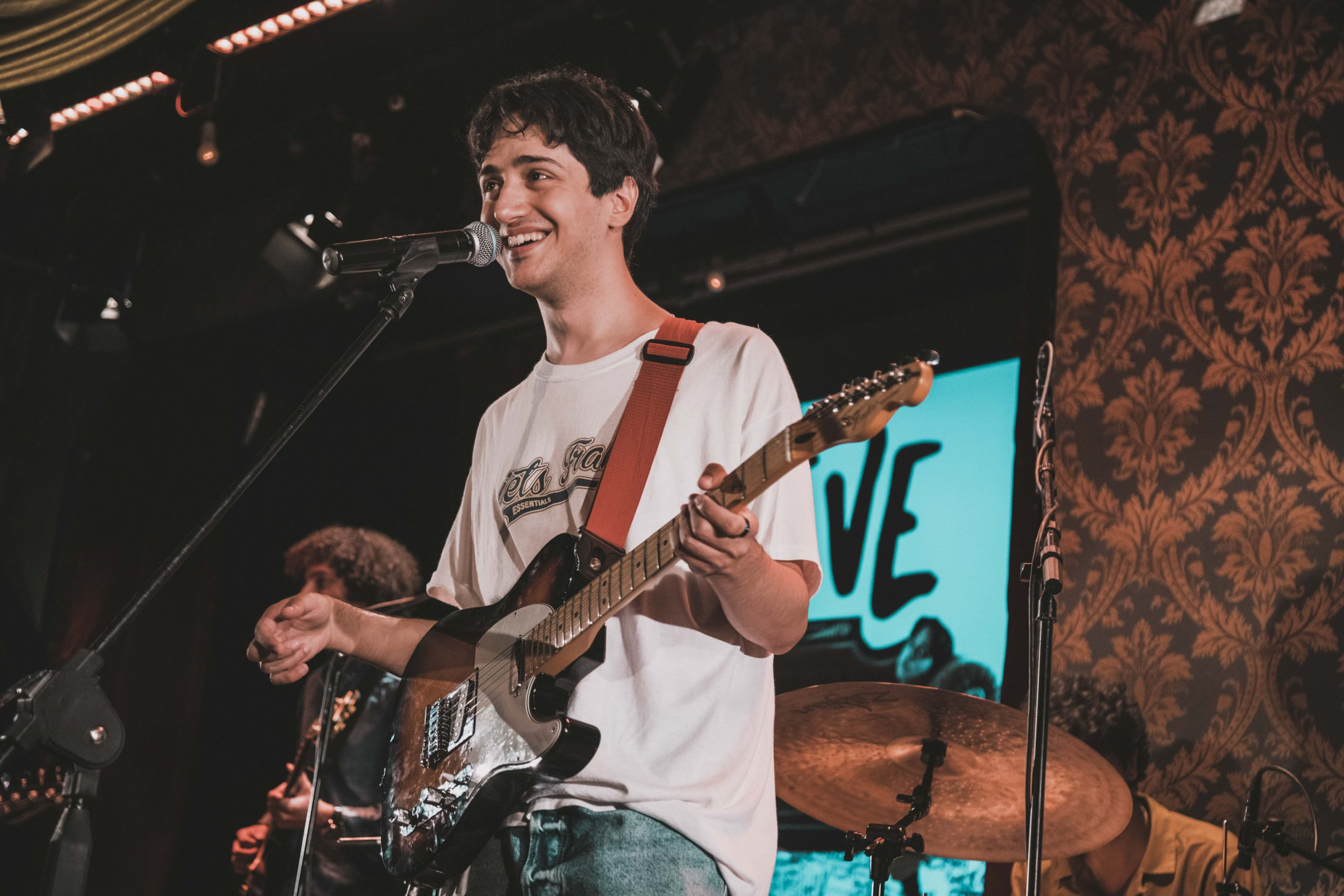 In his first single, paō reflects on his death anxiety. Deceivingly upbeat, the song from the persevering Lebanese musician sees him seeking comfort from his thoughts in the arms of a lover.

The song came from the heart, pouring out emotions in a catchy tune that sets a calming and dreamy mood.

The warmth of the guitar melodies washes over you, locking you in a tight embrace until Alive comes to an end.

The rush he felt when performing his first single in front of a familiar crowd felt surreal and drove him to work on new releases. His energy is well met, the people around me singing along to paō’s lyrics and swaying along as the concert moves forward.

The support from his friends in the crowd and even on stage shows how loved and supported he is. Everyone sang along and enjoyed every bit of the gig as much as I did.

“I’ve never felt this much comfort and confidence on stage,” he said.

Beirut Today sat with paō to talk about his musical journey, the first release, and his future plans.

Beirut Today: Tell me a little bit about WaveinShock

We grew together as artists and played different genres because of our diverse tastes in music. Our originals were usually a combination of all our tastes, which naturally complicated the identity of our sound.

When we finally came to record our music, different things like the pandemic and economic collapse changed our plans. Even after the pandemic had calmed down and we could see each other, we each felt the band had fallen apart seeing that we’ve grown a lot in recent years. After that, I felt it was time to break free from that chapter and move on to a more mature one. I wanted to focus on my own talents and preferences. Our farewell gig in summer 2021 closed a chapter but opened a new one. I was motivated to work on personal projects that suit my own taste.

How did the process go working on your single?

The process was very challenging honestly. Not smooth at all actually and I wish things went better. But you live and you learn, you know? As a first experience, it was great. I got to get a taste of all the problems I could face in the future.

How did you start writing “Alive”?

I started writing a demo at home and I planned on having it fully produced, mixed, and, mastered. I had a rough draft at first with rough recordings.

My friend Amjad Mrad, who is an up-and-coming pop artist, helped me a bunch and walked me through the process since he had already experienced producing and releasing a single. He ended up having a co-writing and co-producing role in the song.

After creating a rough draft with him I felt ready to go to a production house and actually work on it.

What studio did you go to?

I worked with Tunefork Studios, which helped bring my vision to life. I was even able to record and re-record at a lower cost because of a grant supporting rising artists in Lebanon.

Marwan Tohme, one of the engineers and also one-third of the band Postcards, was a great help when re-recording and improving the song. He helped mature the song on an instrumental level. The studio was highly booked at the time, but I eventually got to work on the song.

It was because the studio is important and big and it just happened that there was a lot of demand for the space. Getting appointments and free time to use the studio to continue the process was hard. But all in all, it was an amazing experience to work on my first song. I got to make mistakes, learn from them, and improve.

Tell us more about Alive.

Alive… I actually was on my guitar and was playing a nice riff. I was just switching from one chord to another, then I really liked it and felt it would sound better as a bass line so I recorded it on my DAW.

I started adding layers to it until I got the intro of Alive and from there, the rest is history.

I wanted to make it an emotional song because it tackles the things I went through on a mental level. Alive talks about my death anxiety because it’s one of my biggest struggles. And if you pay more attention to the lyrics it’s me talking about my relationship with death anxiety and seeking comfort in my significant other.

It’s a rollercoaster with low, loud, and intense parts. I decided to end the song in a dreamy way to have a calm “after the storm” feel which I personally enjoyed.

You recently performed a gig, how did that go?

One of the favorite gigs I’ve ever performed. It was at Metro Al Madina on a Sunday night. I loved how supportive the crowd was and even got to listen to strangers sing my song. I feel grateful and proud of all the effort I put into this. This gig inspired and motivated me to continue my musical journey. I’ve never felt this much comfort and confidence on stage.

What are your plans for the future, both near and far?

For the near future, I want to continue writing and releasing music to improve my skills as a producer and songwriter.

I’m working on releasing a song by—hopefully—the end of summer. And eventually having a series of songs released and turning it onto an album or EP.

As for the far future… I’m actually leaving Lebanon to pursue my Master’s in Paris. I’m going to try to establish myself in the music scene there and even get to work on my own music with people from a different culture from what I’m used to. I don’t know, I might even form a band with like-minded people in the area and get to experience a new perspective in the musical industry.

Just moving away from the scene we are used to here in Lebanon could teach me so much about myself. But you never know, you know?