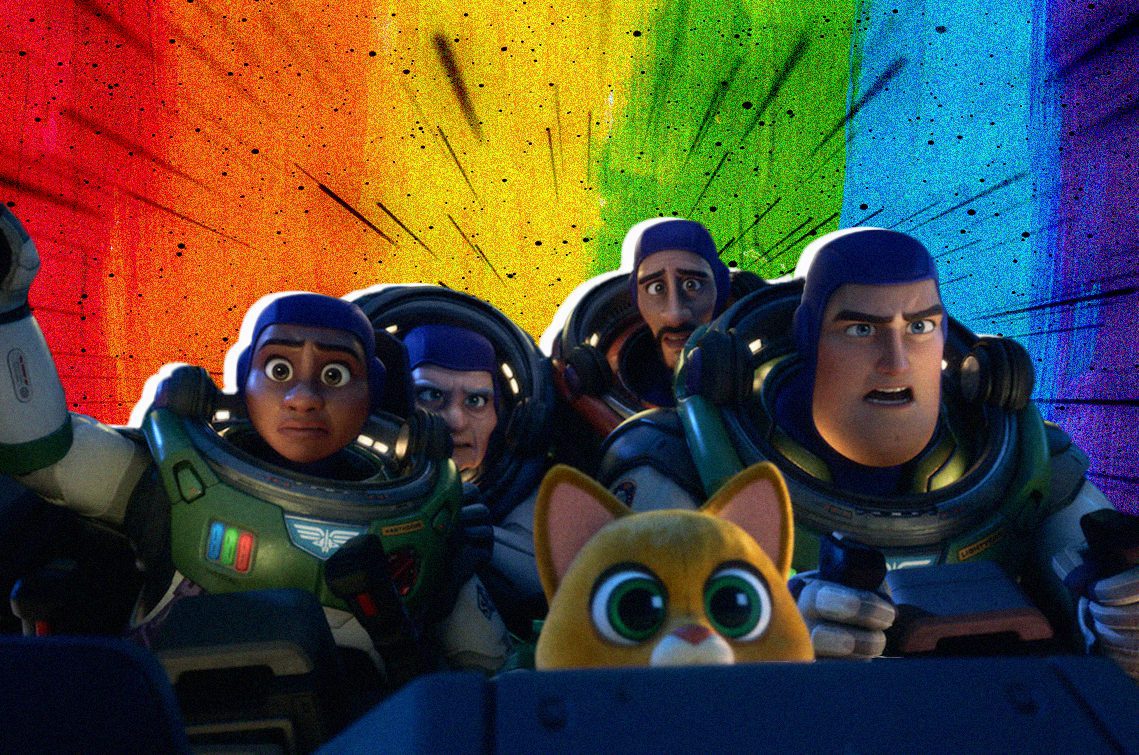 Lightyear, Walt Disney and Pixar’s newest animated film, joined the list of films that are banned from showing in theaters across the Middle East. The Toy Story prequel won’t be screening in eight Arab countries, including Lebanon, for showing a kiss between a married couple of the same-sex.

Aside from Lebanon, the movie is now banned in Egypt, Jordan, Saudi Arabia, Bahrain, the United Arab Emirates (UAE), Oman, and Kuwait because Disney refused to cut a scene where two married women kiss.

Officially, the UAE’s Media Regulatory Office released a statement on their social media accounts confirming the film was banned for “violating media content standards applicable in the country.” Meanwhile, Roya News reported that the film was banned by the Media Commission of Jordan to protect “the values of Jordanian society from any violations that offend public order and morals.”

According to Variety, the film had received approval to show in UAE theaters after the decision was made to lower censorship restrictions on movies and instead rate certain films for those over the age of 21. Local audiences called for the banning of Lightyear via social media, under the pretext that the film insults Islamic beliefs, which led to the decision taken by UAE authorities.

Lightyear, the prequel to the Toy Story sequel, tells the tale of legendary Space Ranger Buzz Lightyear (voiced by Chris Evans) who finds himself diving headfirst into adventures across the galaxy with the help of Space Ranger Alisha Hawthorne (voiced by Uzo Aduba). Hawthorne turns out to be in love with another woman from the team of Space Rangers, ultimately leading to the kiss scene during their engagement party.

The scene originally triggered protests by Pixar employees when Disney, their mother company, asked them to cut it from the film for showing “overtly gay affection.” They sent an email to Disney administrators accusing the global entertainment company of imposing censorship on LGBTQ+ content in their feature films, at a time when the US state of Florida was preparing to legislate the “Don’t Say Gay” bill in schools. The Pixar letter accused Disney of trying to please investors by banning the kiss scene, which was eventually added back into the film.

But this isn’t the first time Disney films are banned in Arab theaters. Eternals, from director Chloe Zhao (the first woman director to run a Disney superhero production), was banned in several Arab countries for including a sex scene, as well as an intimate kiss between husbands Phastos (Brian Tyree Henry) and Ben (Haaz Sleiman).

The release of Eternals marked a major shift in general for Disney policies on the representation of marginalized groups on screen. In addition to the kiss, its cast highlighted both racial diversity and disabilities. The movie provided the opportunity for deaf actress Lauren Ridloff to become Makkari, the first deaf superhero on the silver screen.

Some time later and in typical fashion, Arab countries also banned the 2021 remake of the musical drama West Side Story for portraying Anybodys character (played by non-binary actor iris menas) as trans.

Some Arab nations also banned Doctor Strange in the Multiverse of Madness, which is considered to be the Marvel Cinematic Universe’s introduction to the multiverse, because America Chavez wears a pride pin on her denim jacket and a 12 second dialogue takes place about her two mothers.

Disney is no longer interested in censoring its movies when it comes to the LGBTQ+ community, that much is clear. The decision appears to be entirely in line with other Hollywood studios, which have been diversifying their work and ensuring more fair representation for marginalized groups since the emergence of the “Me Too” movement against sexual harassment in the entertainment industry.

But what remains unclear is how that will work with its Disney Plus streaming platform, which is launching in 42 countries—including 16 Middle Eastern ones.

Will the works banned in the movie theaters of certain countries for representing the LGBTQ+ community also face the same fate on Disney Plus? Will Disney cut the scenes that prevented its films from showing across cinemas? Or will Disney refuse to censor itself on its streaming platform? And how will countries react to the latter decision?