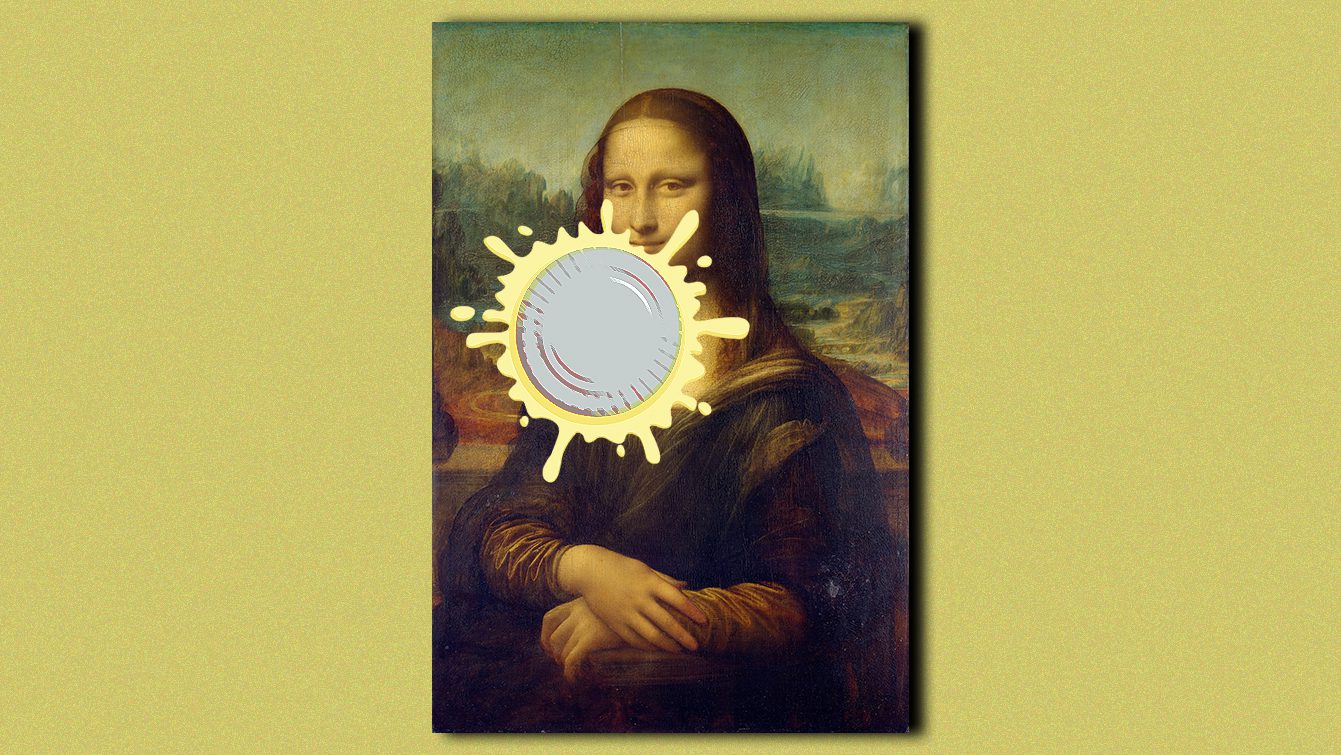 Pie, teacups, and theft: The 500-year-old history of attacking the Mona Lisa

The famous Mona Lisa by Italian artist Leonardo da Vinci (1452-1519) may have had a small scare when a custard pie was thrown in its face last week, but getting through it must have been a piece of cake given what the painting has endured for more than 500 years.

A Glance at the Mona Lisa

The Mona Lisa was painted in the beginning of the 16th century, between 1503 and 1506 as per the Louvre. The bulk of the narratives that have been mentioned in the memoirs gather that the Mona Lisa depicts a lady from Florence, Lisa Gherardini, who was married at the age of 15 to the much older Florentine merchant and suspected slave trader Francesco del Giocondo.

The painting became famous over the years for her mysterious smile and received its fair share of representation in caricaturists’ satire and satirical art. And although the painting was finished in 1503, it did not gain popularity until the 19th century, when critics began describing the Mona Lisa as one of the best works painted in Florence during the Renaissance.

Until today, the Mona Lisa has been a topic of controversy and dispute. Some say that it belongs to the Florentine Lady Lisa, others believe that it was painted at the request of Giuliano de Medici, and a majority claim it is a figment of Da Vinci’s imagination.

The Mona Lisa in the Face of the Climate Crisis

The recent attack on the Mona Lisa’s display in Hall 6 of the French Louvre Museum marks the latest strike in the painting’s rich history.

Based on circulating videos, the attacker who smeared the painting with a piece of custard pie is a man in his twenties who was disguised as an elderly woman in a wheelchair.

He jumped out of the wheelchair, smeared cake on the protective glass that protects the Mona Lisa, and threw roses around before being tackled by security and escorted out.

The video, verified by Reuters, records the attacker saying to the people who were filming the scene, “There are people trying to destroy the planet…Think of the Earth…Just think.”

How Did The Mona Lisa Become Famous?

Although it has gone through many adventures that preceded 1911, the Mona Lisa had not been so popular until that year.

The Mona Lisa’s fame was amplified when the painting was stolen by Vincenzo Peruggia, one of the workers transporting glass to the Louvre Museum. The robbery was discovered after an artist paid a visit to the Louvre to study the painting.

The irony lies in the fact that the police interrogated Peruggia and the investigations validated his alibi of working in a different place on the day of the theft.

Meanwhile, the painting remained hidden inside a trunk in his Paris apartment for two years. He would later tell jurors that he was driven by his patriotism, avenging Napoleon’s plundering of artworks from Italy—although the Mona Lisa was never stolen, but taken to France by da Vinci himself prior to his death.

The duo then informed the police, leading to the arrest of Peruggia  in 1913. The art thief was sentenced to only 12 months of prison.

The Mona Lisa, like other precious paintings, faced many thefts and attacks, in addition to a list of amusing events that accompanied its journey with da Vinci before his death. A 2014 France 24 article suggesting the selling of the painting to relieve national debt ranks among the most amusing recent headlines surrounding the Mona Lisa.

In this regard, reports on the Mona Lisa mention that da Vinci took the painting with him when he left Italy for France in 1516.  It would pass through many hands after his death in 1519, eventually finding its way to the Palace of Fontainebleau, where it was kept by French King François I.

The Mona Lisa was then moved to the Palace of Versailles during the reign of King Louis XIV, before it became a part of a public collection at the Louvre after the fall of the aristocracy and the victory of the French Revolution in 1797. Other accounts also say that it was placed for a short period in the bedroom of Napoleon Bonaparte, a period that also witnessed its restoration.

But its stay did not last long in the Louvre. It was moved from the museum to Brest Arsenal during the Franco-Prussian War (1870-1871). After that, it was returned to the Louvre where it remained unknown outside the world of art until the mid-sixties, when part of the French intelligentsia spoke of the Mona Lisa as one of the most important works of art painted in the Renaissance.

And despite its resilience in the Louvre, it faced many attacks over the years, including the one recorded in 1956, when Bolivian Ugo Ungaza Villegas hurled a rock that shattered the glass case of the painting and dislodged a speck of pigment near the subject’s left elbow. It had only been protected by glass because, a few years before the incident, a man tried to cut it with a razor blade and steal it because he loved the painting.

The French government also loaned the Mona Lisa to the American government between 1962 and 1963 to display it in New York City and Washington, DC.

In 1974, after moving it from Moscow to Tokyo, a woman threw red paint at the Mona Lisa during its display at the Tokyo National Museum as a way to protest the failure of the Tokyo Museum in providing services for people with disabilities. It was unharmed.

Apart from these incidents, the painting’s frame became a site of an insect infestation in the 1970s, but experts were able to treat it with carbon tetrachloride and ethylene oxide.

It survived a new attack in 2009—the last before the May 2022 one—when a Russian woman threw a ceramic teacup at the painting in protest of not being granted French citizenship.