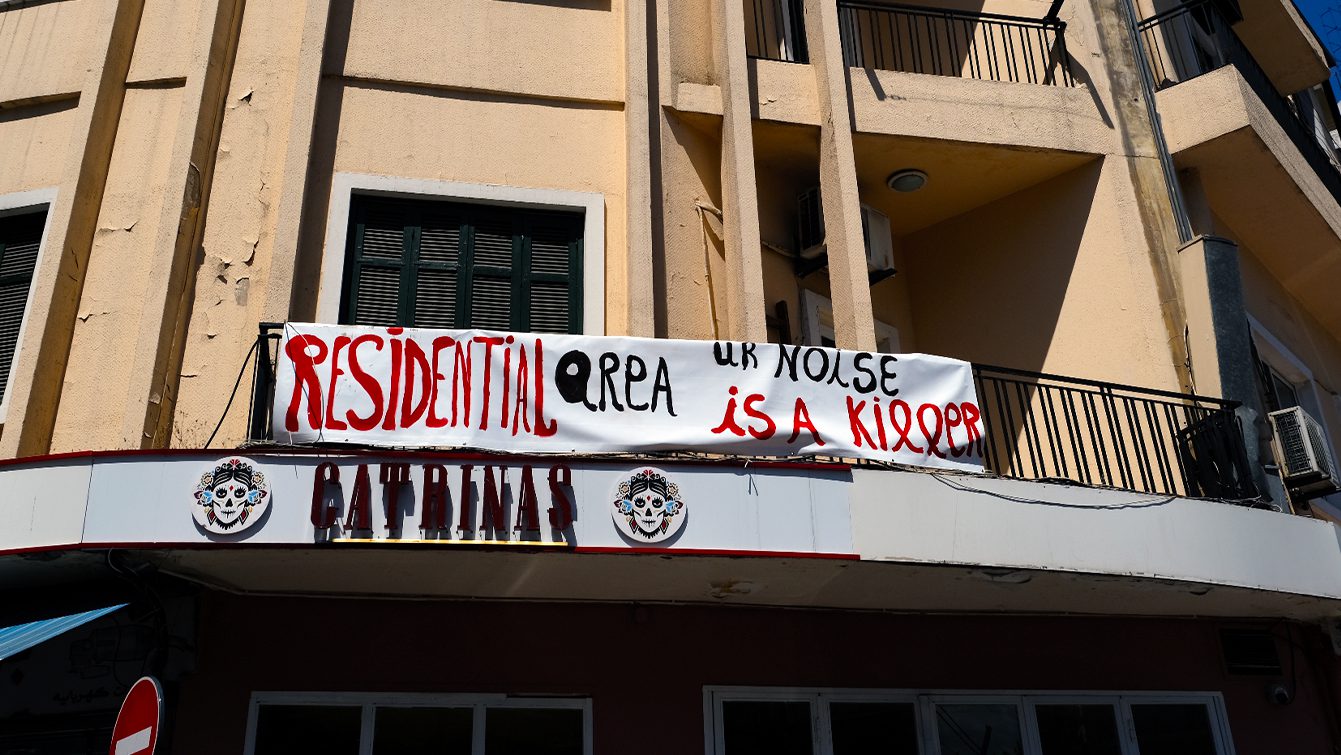 Mar Mikhael’s pubs, bars, and restaurants rose from the rubble months after being completely wiped by the Beirut Blast. The vibrant neighborhood’s pulse started to beat again despite unthinkable loss—much to the joy of those who frequent the neighborhood during its bustling weekends.

But as the famous French proverb “Le bonheur des uns fait le malheur des autres” says, the happiness of some is the misfortune of others. Those who actually live in Mar Mikhael do not seem to share the same enthusiasm. Instead, they feel as if their neighborhood has been taken away from them twice.

In recent weeks, the area’s residents have started to protest. They’ve set up banners reading “Residential area, ur noise is a killer” on their buildings.

Noise as a way to force residents to leave

Lina and Tony, who live in Gemmayze and Mar Mikhael respectively, are a part of a broader community that is actively working towards reducing noise pollution in their neighborhoods.

“Mar Mikhael and Gemmayze are residential areas and people seem to have forgotten their history,” said Lina, who is an active member of the ongoing anti-noise pollution movement.

“The party people who take over the streets at the start of dusk do not realize that this neighborhood is home to many. I have been living here my whole life and will not leave because of inconsiderate pub owners and the mafia that protects them,” she told Beirut Today.

Lina’s small apartment in Gemmayze features a charming garden with plants, flowers and a swing. She can only enjoy it during the day, because at night, the restaurant on the other side of her wall turns the music and generator on.

Not only is her life disrupted by the noise, but her health is also at risk.

“I spoke to the owner so many times. I asked him to put a filter on his generator so we don’t inhale the black smoke coming out of it,” said Lina. “We also asked him to lower the music and to let us know when he’s hosting a special event. He just ignores us.”

The issue of noise pollution is bigger than what it seems to be. It’s not just about the noise—it’s about the loud music pushing alcohol consumption, the intoxicated men and women, the garbage, the careless valet parking that take up the parking spots of residents, and inconsiderate managers who tell residents to stop complaining about the tables on tight sidewalks and to walk on the street instead.

Lina believes that the government, rich businessmen, and powerful realtors are indirectly and without accountability pushing residents to leave the area by allowing pubs to open and function where they live, their aim being to build large and profitable projects such as Solidere.

“I will not be intimidated, I will stay in my home with my mother and sister and will continue to do everything I can to revive and maintain the community of people we have here,” she asserted.

Municipalities take a piece of the cake

Tony lives right above a bar that has now been shut down. The loud music that made his walls vibrate, coupled with the shrieks of young intoxicated men and women, made him sleep deprived. He would reach deep states of exhaustion before his body would finally give up on perceiving the noise around him and force his eyes to shut.

“For four months, I did everything I could to make them lower the music but the managers showed no sign or willingness to cooperate,” he said.

“So I filed a complaint against the pub owner and his landlord. I seized the judge and finally won the lawsuit,” explained Tony. “I myself was very surprised to see that for once, the law was on our side. I’m sure that it’s because I called the police station every day for 4 months.”

Tony insisted that the problem was not only the bar owners, but was first and foremost the governor of Beirut and the municipality. He believes they take advantage of the situation.

“They give licenses to whoever is willing to pay to open a bar or a pub, and they take a big piece of the cake.”

When asked about the role of the pubs’ clients in respecting the neighborhood, Tony rolled his eyes.

“Those who come here are those with the financial means, but financial means is evidently not equal with education,” he said. “They have no respect for others. They drink, they are loud, they litter, and often they enter our building entrances to have one last beer when their favorite bar finally closes at 3 am.”

“Them not having a sense of humanity and decency is none of my business. What is my business is having the municipality do its job and ensuring that pubs respect the rules,” explained Tony.

Some pubs are being sealed with red wax

Lina printed all the papers on noise laws in Lebanon: Article 262 (dated 25 February 2009) of the Tourism and Interior Ministries and the municipalities, along with the Environment Ministry’s decision Number 10 (following decision 1/52 of 12 September 1996), state that “music volume coming from pubs and bars should not exceed 55 dB in residential areas and 65 dB in non-residential areas.”

The laws also state that, in residential areas, pubs, bars and restaurants are obliged to turn off loud music at midnight.

Lina also has a report on the effects of sound pollution on one’s mental health and nervous system.

“Pub owners have no consideration for others. There are children, the future of the country, who need to go to bed early to be able to concentrate at school the next day. There are elderly people, some sick, some tired, some still suffering from the blast, who need to rest in a peaceful environment,” she pleaded.

Lina fights for her community. She gathers friends and neighbors to rally to her cause, and so the word spreads fast. She now has a group of over 70 people who are working towards making their neighborhood their safe haven again.

They communicate over WhatsApp and for each pub that doesn’t abide by the rules, they build a solid case that they present to the police. They do not meet in person because they do not want to be “uncovered,” fearing violent retaliation from pub owners.

“We are doing things the right way,” she said proudly. The young woman is against protesting in the streets. Instead, she opted for banners on buildings to raise awareness.

“Some people do not notice, others are being sensitive to the cause, and pub owners are getting angry.”

But the banners are just one of the steps that she is taking to fight the noise pollution in the area.

“We now have credibility and when we present a case to the police station, it is well received,” she added, surprised. “For once, we feel that we are heard and we feel that our laws are being respected.”

A week before the elections, six pubs in Mar Mikhael were sealed with red wax. The police shut them down and referred their cases to public prosecution. Three days later, they managed to re-open under specific conditions.

Quietness is bad for business

One pub owner, a young woman, was confused as to why her pub was shut down. “No one lives around our bar,” she told Beirut Today. “Do you see those banners about noise pollution in front of us? Well, they are installed on an empty building.”

According to her, lowering the music volume would be bad for business. Customers frequent and enjoy her pub for the song variety and the loud music that they can dance to.

“We had a few people complain and we did lower the sound and it wasn’t even midnight,” she said. “What they really wanted us to do is to completely turn off the music!”

She believes pubs in Mar Mikhael are keeping the area alive, both economically and socially.

“Thanks to the salaries we pay our employees, 20 families are able to live. We are not just here for profits, we are also here to help others and empower them economically,” she argued.

“Look at the situation,” said the pub owner. “They blew us up and now they want to shut us down.We only have a few places left to go and enjoy ourselves, and even this, they want to take away from us.”

When asked if she knew the residents who shut her bar down, she looked surprised: “It’s not the residents, it’s the government!”

Both residents and pub owners seem to blame the government, believing that raising the volume on one side and lowering it on the other are both part of the same tactic to shut the area down.

In a neighborhood as vibrant and complex as Mar Mikhael, the noise pollution banners draped on buildings bear a lot more to them than their initial message.

A delicate balance must prevail—one where joy doesn’t become a nuisance—but is difficult in the absence of clear boundaries, in the presence of rampant briberies, and without the proper implementation of laws.

“I am not against having pubs,” explained Lina. “But I am for those places to abide by the rules and regulations they are subject to by the Lebanese legislation.”