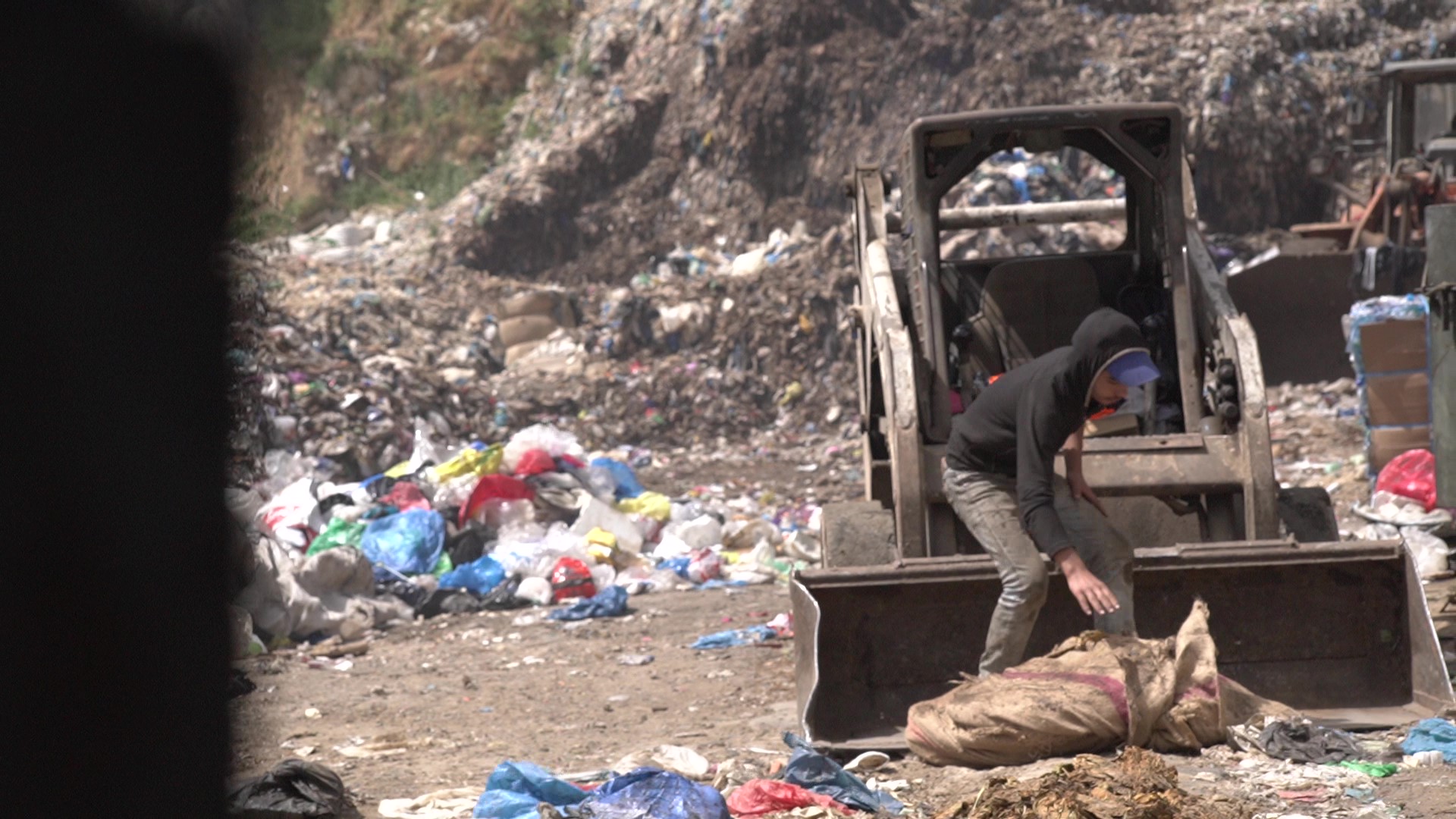 Scavengers stand atop mountains of trash inside Lebanon’s landfills. They rummage through tons of trash—illegally—and regularly risk their lives for scraps of metal and recyclables.

In April 2022, one even lost his life after being run over by a Ramco truck at the infamous Jdeideh landfill. Trash collection and disposal was suspended in the days that followed, with contractors requesting guards to prevent the scavengers from entering the dumps.

But laws don’t mean anything in Lebanon, and the scavengers would ultimately return. The discarded materials that contractors were trying to lock up are more than just trash to them—they’re a means of survival.

They sift through a sea of garbage for anything that can be reused and sold, because they understand there’s value to them.

“All these governments in Lebanon don’t understand that garbage should be thought of as a resource that we can benefit from economically,” Samar Khalil, an environmental and chemical safety officer at the American University of Beirut’s Environmental Health, Safety, and Risk Management Department, told Beirut Today.

In an ideal circular economy, existing materials and products are shared, leased, reused, recycled, and refurbished for as long as possible. Materials are managed efficiently, renewable resources are encouraged, and waste is kept to a minimum.

Cedar Environmental, an engineering company founded and run by Ziad Abichaker, specializes in municipal recycling facilities. Its CEO believes in a zero-waste approach to landfills—particularly as most of Lebanon’s garbage is organic.

Abichaker believes in a decentralized approach to waste management in Lebanon, which may lower conflicts over bringing in waste from one district to the another and creates trusts. Municipalities, he said, play an integral role in this.

The decentralized treatment of waste implies building a number of large factories across different districts. “These are large factories, built and covered. From the outside, you can’t tell they treat waste,” he said.

Such a nationwide plan requires an initial investment into municipalities, but a sustainable waste management system ultimately pays for itself.

“If you deal with this garbage as a resource and use good management practices in its transport, sorting, treatment, and transformation, you will end up with a product that you can then resell,” Abichaker told Beirut Today. “This is called cost recovery.”

From waste to compost

Compost Baladi, a social enterprise specialized in managing organic waste, also recognizes the importance of what is being tossed into bins across households.

“Our main goal is to transform the societal burden of organic waste into an economic and agricultural opportunity by transforming this waste into the organic fertilizer known as compost,” said Marc Aoun, the co-founder and CEO of Compost Baladi.

Their work began by focusing on providing municipalities, companies and residents with decentralized stations to begin the treatment process directly from their homes and immediate surroundings—and for them to benefit from the compost that is being produced.

Compost is organic material that can fertilize and improve soil fertility to help plants grow. In its simplest form, the mixture requires green waste (such as decomposing plant and food waste) and brown waste (carbon rich materials such as foliage, paper, and wood chips).

“In 30 days [after you put the material], you get compost,” said Rabea Touma, the lead mechanical engineer at Compost Baladi. “But after 30 days you need to remove them and set them aside for two months, because there would be a lot of bacterial activity and the temperature will be really high.”

Not only that, but the process is also odorless—thanks to a design that features a biofilter to reduce the stench of decomposing material.

“It gets rid of the smell, and basically extracts all the harmful chemicals, so you get clean air leaving the machine,” said Touma.

Compost Baladi also works on a larger scale than homes. They place sizable compost bins at big supermarkets, offering free waste collection services to them on a daily basis.

“Where we are standing now used to be a landfill for the municipality,” said Karl Mhanna, a field engineer with the social enterprise. He was describing an empty space with large shipping containers of compost. Unlike landfills, which you can see and smell from kilometers away, the containers don’t smell like anything—even when they’re opened up.

But the space was once very different. The municipality used to dump their waste in it, up until Compost Baladi proposed a solution. They took reign of the land for free, renovated it, and now provide free waste collection services for big waste generators in the area.

Similarly, Cedar Environmental relies on machines and processes that are easy to follow for everyday people. In Beit Mery, the site of a sorting and composting facility implemented by the firm, people are encouraged to sort their waste into two bags.

“You try to encourage people to sort through waste at the source, and sort it in an easy way,” he said. “There are places that require three separate bins for sorting, but from my experience, using three bins doesn’t work. It is too difficult for people to abide by.”

The dangers of landfills

Landfills like the Costa Brava, Bourj Hammoud, and Jdeideh sites were not meant to be used forever. They were temporary solutions while other sustainable waste management plans were in the works.

“When the landfills were at full capacity, they kept expanding them and extending their contracts,” said AUB’s Samar Khalil. “If you look at the Jdeideh landfill, it keeps rising because there’s no space.”

A decision was taken to expand the landfill into a nearby land, but Lebanon’s economic crisis forced the work required by the new space to come to a halt. “They can’t make the new landfill, so they’re piling up garbage on the same land.”

Today, if you’re grabbing coffee at the Citymall and decide to look out the window, you can catch rare glimpses of the sea from behind a mountain of trash. And if you’re sitting at one of the seaside restaurants nearby, you can catch an occasional nauseating whiff of trash.

It’s not only your eyes and nose that are being affected by the ever-growing landfills in Lebanon. Their careless placement is hazardous to your health.

“Burning waste leads to the release of extremely dangerous toxins into the air, including dioxins and furans and especially if you burn plastic,” said Khalil. “These are cancerous toxins, they are not biodegradable, and they cross vast spaces.”

Khalil explained how these toxins are stored inside fat tissues within the human body and cannot be removed. “They pile up in the body and can lead to birth defects. A woman can transmit them to her fetus while pregnant or to her baby if she’s breastfeeding.”

As experts in making empty promises, Lebanese politicians and public figures often begin recycling projects that end up as landfills.

The issue of waste management in Lebanon ties into how successive governments have dealt with all sectors—with corruption, a lack of transparency, and an aversion to accountability all prominent issues.

When people put in the effort to sort their trash and then see them all lumped together and pressed in garbage trucks, it also takes a toll on trust levels.

The problems are not limited to local initiatives. The current economic crisis has turned Lebanon into a “nation of NGOs,” but non-governmental organizations and international initiatives are also not well-equipped for handling an issue such as waste management.

“NGOs have budgets and certain timeframes before they have to leave and move onto new projects, whereas there’s garbage produced every day,” said Abichaker. “If nothing sustainable was done, the project ends.”

“Eighty or ninety percent of waste management projects launched with foreign or local funds through NGOs or municipalities all failed, because there is no follow-up or interest in launching treatment factories and managing them,” he said.

Ultimately, a successful waste management project will rely on a nationwide decentralized system.

“We have a set plan, and I think now is the right time to launch it,” said Abichaker.