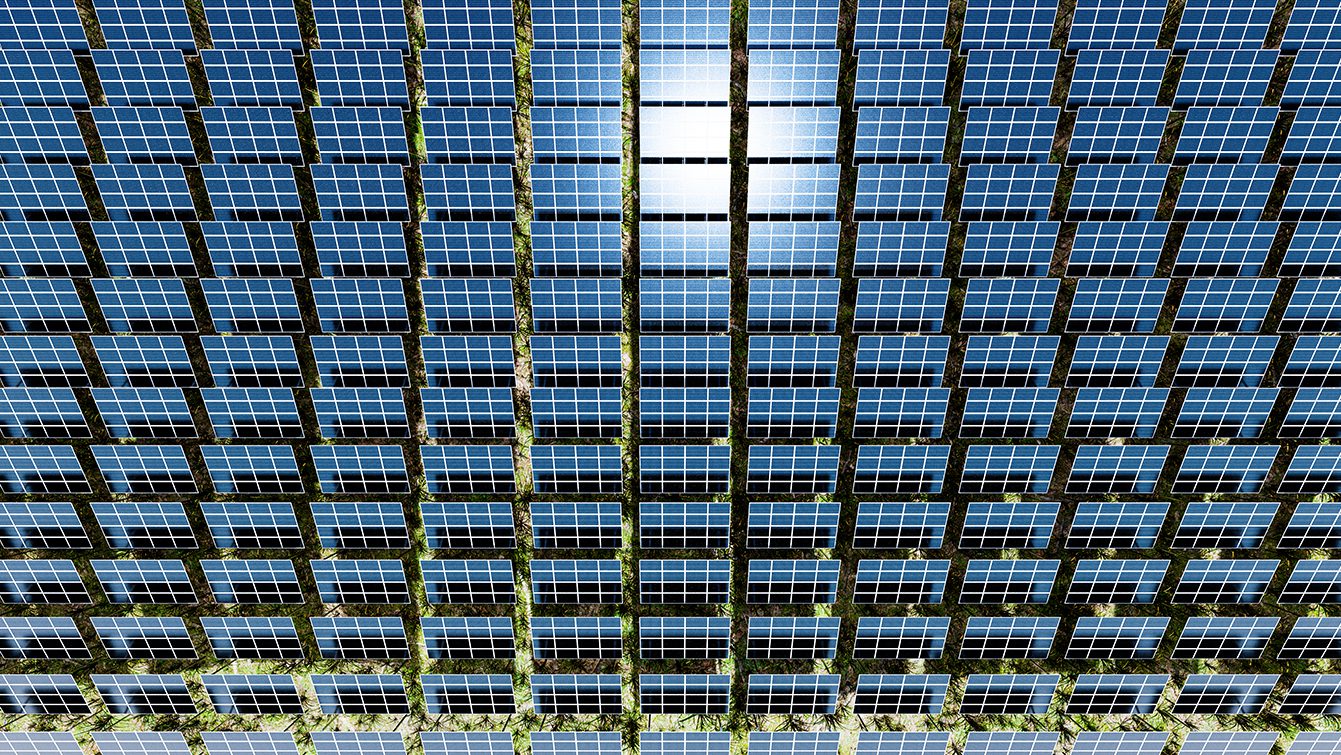 There is a Lebanese engineer who is considered by some to be the father of modern electricity, carrying the same weight as Nikola Tesla and Thomas Edison in electrical history. Hassan Kamel Al Sabah altered the development of 20th century technology when he discovered the processes of nuclear fission. He was also the first to develop a television powered by sunlight.

And yet his homeland in 2022 is struggling to deliver more than two hours of electricity per day to its citizens. Without state-provided electricity and fuel to run private generators, everyday people in Lebanon have been forced to seek out alternative ways to power their homes. Much like the early engineer, they are turning towards the power of the sun.

Why is there no electricity in Lebanon?

Photovoltaic (PV) technology converts sunlight into electrical energy—and brings Lebanon a glimmer of hope in the dark. The country’s energy supply has been inconsistent since the 1975-1990 civil war, but has drastically degenerated in the past two years as a result of an ever-deepening financial crisis.

Blackouts have become a regular feature of everyday life, with those living in Lebanon working out their schedules to host friends over, do their laundry, and use the elevator based on the availability of electricity.

The issues in the local electricity sector can be divided across three fronts: technical, economic, and political. Marc Ayoub, energy researcher at the Issam Fares Institute (IFI), describes the technical front as mainly relating to the lack of investment in the electricity sector as of the late 1990s.

“The second front is related to the economic and financial sector. The government stabilized the tariff at the price of $20 per barrel of fuel,” said Ayoub. But in 2022, the cost of that same barrel was at $70 or $80—prior to the skyrocketing cost of fuel resulting from the Russian invasion of Ukraine.

“From 1992 until the end of 2020, there was an estimated $43 billion allocated solely to the electricity sector in Lebanon,” he said.

Both high costs and the lack of investment in the sector reflect decades of corruption and the mismanagement of resources by the political elite. Today, Lebanon finds itself short on the dollars necessary to import fuel for the state-run electricity company and diesel for private generators. Sectarian and political conflict—over who gets to take the bigger slice of the cake—means that long-term plans for the energy sector’s reformation have been on hold for years.

“The third front is political, or approaching the electricity sector as a means to profit, broker clientelism, and be divided among political factions,” said the researcher. “This exploded in today’s crisis because there is simply nothing left for them to divide.”

Can solar energy be a solution for Lebanon?

Lebanon has several competitive benefits that will enable the development of a renewable energy industry, particularly the abundance of sun. Wind, water, and some biological resources are also available, despite the limited availability of land and space.

“We are  blessed to have this much sunshine to benefit from,” said Carla Nassab, project officer at the UNDP.

Such a division makes it hard to find space to build the structures that solar power systems require, especially when most apartment buildings have flat ceilings used as shared areas for water tanks, satellite dishes, and air conditioning units.

The remaining available space that can be used to install PV systems is estimated to be 20 to 30 percent of the entire roof surface. In response, integrating solar panels into building fabrics such as walls, glass, and ceilings is evolving to become a more attractive solution as it does not take up space.

In rural areas, space is less of an issue. Al-Haj, the owner of a refrigerated warehouse for vegetables and fruits in the Bekaa Valley, described the area as getting state-supplied electricity for less than an hour daily.

While such an investment required a hefty sum of money from him in the beginning, Al-Haj believes that the PV system is worth it in the long-run when you factor in the maintenance cost of generators and the price tag of fuel in today’s crisis.

“We have sun, and we don’t have electricity, so we need an alternative, and that’s solar power,” he said.

While good for securing power to homes or for companies, decentralized solutions do not solve the national electricity crisis and not everyone can afford the hefty initial cost of investing in solar power.

“For this reason, the government should project a 10-year plan on how much renewable energy we would like to produce and it should turn towards large-scale solar power systems,” said Ayoub.

But how do we implement large-scale systems?

Like the implementation of large-scale solar energy systems, such a commitment requires the cooperation of both the private and public sectors. The Ministry of Water and Energy would be required to transparently receive bids and agree with private contractors to install solar factories, operate them, and take care of their maintenance.

The winning contractor would later sell the government electricity for the project’s duration, which lasts for around 25 years in renewable energy. But nothing can be achieved without proper governance.

“We need transparency and to be following the Public-Private Partnerships Law,” said Obeid. “We need proper governance in the sector to truly benefit from investments. We also need a regulatory body to provide licenses, and this all won’t happen if we don’t have a financial solution.”

Ayoub highlighted the difficulty in hitting the 2030 goal, with the International Renewable Agency (IRENA) stating in 2020 that Lebanon would have to produce no less than 4,600 or 4,700 MW of renewable energy to hit the target.

“We are talking about a large goal, or rather, a challenge, for Lebanon, seeing as we only have 8 years to reach this but we can no longer rely on costly sources of energy because we don’t have the funds for them” said Ayoub.

Without a functional grid, we can’t always rely on solar energy

“Only the Lebanese have to think of batteries,” said Joe Hawi, the chairman and managing director of the solar-panel installing NovaEnergia Lebanon.

Hawi gave the example of Cyprus or Turkey, where a 1 GW solar panel is easily installed without a battery. “Why? Because the battery is not meant to generate energy, it’s only meant to store excess power for the grid,” he added.

“Usually this means storing energy for the very same day, sometimes to cover the need if a cloud passes by or something. If we had a proper electricity grid that works 24/7, then you wouldn’t need batteries.”

In Lebanon, solar energy systems are meant to function off-the-grid. The system is supported by batteries that store the extra power generated by the panels and keep appliances on and functional during outages.

“The solar PV system on its own has large potential that Lebanon can benefit from but we have to pay attention to the fact that solar power does not work at night,” said Nassab from the UNDP. “We have to have another power source that works at night, which is usually batteries.”

Over the years, perspectives have changed for the better

Despite that, Lebanon has seen several success stories in terms of how much solar energy can alleviate electricity outages. Qabrikha, a small village in the south, saw the implementation of a EU-funded solar energy project by the UNDP’s CEDRO 4. The project began in 2014, with Qabrikha selected because it had its own electrical grid that was spread by the municipality and connected to their generators.

But people were reluctant about installing PV systems at the start.

“Some asked what it is and whether we were sure it would generate electricity,” said Nassab, adding that the residents of the village became more open to the idea when they saw how well the systems worked for their neighbors.

Today’s perspectives on solar energy systems shifted greatly from 2014. “The Lebanese consumer, the homeowner and business owner, was put in a corner,” said Hawi, whose company installs both large-scale and small-scale PV systems.

“There’s no electricity today and private generators are no longer a reliable source of electricity, so Lebanese have to be self-reliant now,” he said, adding that the issue caused the solar revolution we’re witnessing today.

Without guidance, it can be confusing for customers to break into the world of solar energy and to understand how such systems are priced. Hawi defined solar power as being modular, meaning that any house owner can increase or decrease its power (and cost) as much as they’d like.

If a person needs to turn on a washing machine, microwave, and air-conditioner, a bigger system is required. More batteries and panels are needed, which means more cost. But if a person only needs to turn on lights or small appliances when their electricity cuts, a smaller system would function well and cost them less.

“The bigger your solar power system, the more electricity you have,” said Hawi, adding that budget and space are the only limitations for such a system.

Hawi also said the price can decrease to $2,000 for a small system installed by companies that provide lesser quality equipment and shorter warranties. “This means you can end up changing the whole system every two years,” warned Hawi.

Marc Ayoub issued a similar warning, indicating that many standards are not being respected when installing solar energy systems in Lebanon because of the absence of governmental monitoring.

“We need to have a coherent system, batteries need to be compatible with the inverter and the panel, and the specifications respected,” said the energy researcher. “People need to know that they shouldn’t trust everyone to install their systems and that they need to look at multiple offers, consult multiple companies and decide accordingly.”

Before prompting the procedure of powering a house with solar energy, homeowners must study their energy use and assess possible efficiency upgrades. Before choosing solar, they should know details that include their total electricity usage and consider low-cost and easy-to-implement efficiency criteria.

But so long as we lack proper governance and long-term national strategies in motion, we will only ever be able to speak of solar energy in terms of decentralized and personal solutions that are independent of the Lebanese government.

So long as those in power continue to bicker among themselves and divide the country’s resources among themselves, Lebanon will struggle to create any energy advancements that would have made Hassan Kamel Al Sabah proud of his homeland.