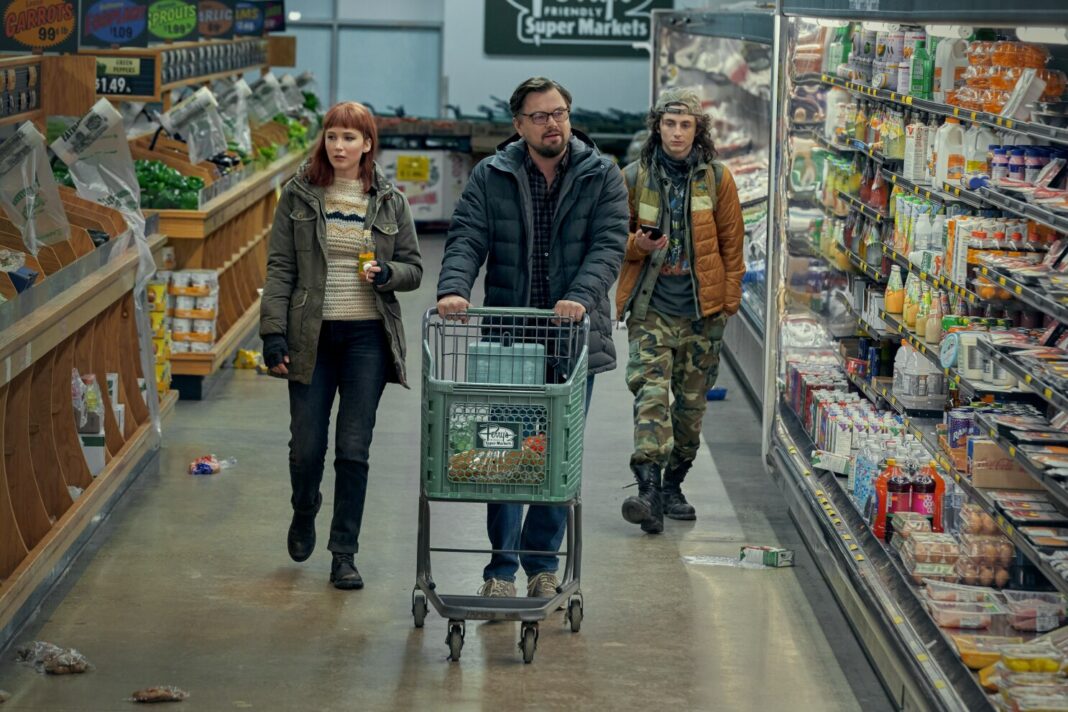 Earth is about to face an extinction-level event, scientists raise their concerns, politicians and the media undermine it, scientists are later on validated, everyone acts to save humanity and we all live happily ever after! That’s the plotline of almost every natural disaster movie that has come out of Hollywood—whether the culprit is a planet-killing comet, hurricane, or tsunami.

A few weeks have passed since its premiere, but Adam McKay’s Don’t Look Up is already one of the most divisive films out there. The political satire thinly veils urgent commentary on the manmade climate crisis in yet another natural disaster movie.

The Netflix hit, now the platform’s third most watched film ever, has divided critics and viewers alike in its critique of the dysfunctional state of current politics, media and society.

Don’t Look Up was released at a time when the climate of the world it mirrors is particularly heavy, from devastating wildfires to the pandemic and all its variants.

The movie stars Leonardo DiCaprio as Astronomy Professor Randall Mindy and Jennifer Lawrence as PhD student Kate Dibiasky after they discover a massive comet is headed towards Earth and will cause the extinction of mankind in 6 months and 14 days. But havoc is unleashed when the two scientists set out on a quest to share their findings with the world.

In the movie, leaders see the coming disaster as a political treasure trove for their political campaigns. Businessmen consider it a treasure trove for doubling their already huge wealth. Media platforms ignore the event that’ll wipe out humankind in favor of celebrity scandals. And social media remains a space for bullying.

The film is backed by award-winning stars, with a cast including Meryl Streep, Cate Blanchett, Timothée Chalamet, Ariana Grande, Jonah Hill, and Kid Cudi. Some critics and fans believe the phenomenal performance of the cast is the best part of the movie.

But we never get the chance to fully explore the character development of such a talented and critically-acclaimed cast, particularly Jennifer Lawrence. We know that Kate Dibiasky is the PhD student who discovered the comet, but very little beyond that.

Taking a swing at right-wing politics

US President Janie Orlean, played by Meryl Streep, is meant to be a stand-in for former US President Donald Trump. Like Trump, Orlean is a former reality TV star who dived into the world of politics.

She also shares his infamous anti-science rhetoric, dismissive of the comet heading towards Earth in the same way Trump told California’s Natural Resources Secretary that Earth was going to “start getting cooler.”

When Wade Crowfoot responded that he wished the science agreed with the president, Trump added, “Well, I don’t think the science knows, actually.”

Plastered with makeup, a bright set of fake teeth, and a wide smile, right-wing media propaganda mouthpiece Brie Evantee (played by Cate Blanchett) also didn’t get a chance to properly shine but highlighted the dehumanization women experience when they enter the world of media and television.

Aside from comic relief, the president’s son (Jonah Hill) and Yule (Timothée Chalamet) have no real purpose in Don’t Look Up. The humor sometimes falls flat. Rather than spend time bringing these new characters in, the film could have invested in delving deeper into the nuances of right-wing politics, the economy, and climate change rather than repeat the same handful of points over and over again.

It makes you want to scream

DiCaprio’s noteworthy performance in the Netflix hit is bolstered by his own connection to the cause in question. In an interview with Netflix Film Club, DiCaprio described the movie as “an analogy of modern-day culture and our inability to hear and listen to scientific truth.”

In the way scientists must feel in the real world, we watch as Dr. Randall Mindy grows from being proud and hopeful about his ability to screaming on live television because no one is listening.

“If we can’t all agree at the bare minimum that a giant comet the size of Mount Everest hurtling its way toward planet Earth is not a fucking good thing, then what the hell happened to us?” starts Dr. Mindy before breaking down into a fully-fledged primal scream. “I think this whole administration has lost their fucking mind and I think we’re all going to die!”

And just when you think people will finally spring into action, the camera cuts to Dr. Mindy in the back of a government car with a bag over his head. His raw cry goes unheard, as do the cries of thousands of scientists around the world.

Billionaire Peter Isherwell (Mark Rylance) is an ultra-creepy stand-in for wealthy tech CEOs who harvest societal influence and cash without feeling the need to use their tremendous power to solve the world’s problems.

A fraction of their wealth could end the crisis that they greatly contribute to: A 2020 report from Oxfam and the Stockholm Environment Institute found that the world’s wealthiest 10 percent were responsible for around half of global emissions in 2015.

Despite that, these billionaires go unchecked—their wealth influences politics and the state of the world. Isherwell addresses the President of the United States in Don’t Look Up as his inferior, giving her orders and influencing her decisions.

For them, the biggest threat to humankind turns into an absurd opportunity for commercial gain. When Isherwell’s plan to mine the comet fails, he doesn’t have to suffer its deadly repercussions. He hops on a spaceship along with a handful of wealthy individuals and heads off to a new planet.

Through Isherwell, Don’t Look Up is mocking the billionaire race to space. It’s also touching on privacy and data in the modern world, with the character using technology and algorithms to predict peoples’ death. In this context, Isherwell seems to be a mixture of tech figures like Jeff Bezos, Elon Musk, and Mark Zuckerberg.

Screaming into the void

Don’t Look Up is heavy-handed, a messy mix of ups and downs. There is no harmony, no settling for us viewers. All this appears to be intentional.

We live in a reality where world leaders choose to toss a coin in the famed wishing well of Rome’s historic Trevi fountain for “people, planet and prosperity” instead of coming up with tangible solutions for climate change.

With that in mind, Don’t Look Up isn’t meant to jolt you into action. It’s helplessly screaming into the void at a time when the entire world knows about climate change and a handful of decision-makers would rather be buried with unthinkable piles of cash than leave the Earth a better place for the next generation.

Cendrella Azar is a journalist and advocate for issues related to freedom of expression, human rights and women empowerment.