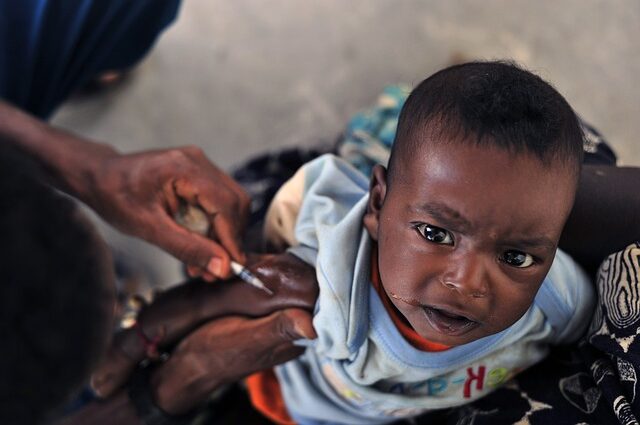 First malaria vaccine endorsed by WHO in “historic day”

The World Health Organization approved the use of a malaria vaccine, a historic first that may save tens of thousands of children’s lives every year across Africa.

“Malaria has been with us for millennia, and the dream of a malaria vaccine has been a long-held, but unattainable dream. Today, the RTS,S malaria vaccine, more than 30 years in the making, changes the course of public health history,” said the WHO Director General Dr. Tedros Adhanom Ghebreyesus, who launched his career as a malaria researcher.

The RTS,S vaccine, or Mosquirix, was developed by Britain’s GlaxoSmithKline. The vaccine is also the first developed for any parasitic disease. A pilot program launched in 2019 saw its administration to over 800,000 children in Ghana, Kenya and Malawi.

The vaccine is moderately-effective on its own. It prevented 30% of deadly severe malaria cases, “even when introduced in areas where insecticide-treated nets are widely used and there is good access to diagnosis and treatment.”

A breakthrough this August found that reduction in hospitalisation or death shot up by 70% when both the RTS,S vaccine and antimalarial drugs were given to children during high-transmission seasons.

“This is a historic moment. The long-awaited malaria vaccine for children is a breakthrough for science, child health and malaria control,” said the WHO director general. “Using this vaccine on top of existing tools to prevent malaria could save tens of thousands of young lives each year.”

The estimated number of malaria deaths stood at 409,000 in 2019. Children under 5 years account for 67% of this figure, or 274,000 deaths, according to WHO. Around 229 million cases of malaria were recorded that year and more than 94 percent of cases and deaths were recorded in Africa.

Creating an effective vaccine against malaria is an incredibly difficult feat. The life-threatening disease, which has existed for millennia, is caused by parasites transmitted through the bites of infected female Anopheles mosquitoes.

These parasites have evolved to evade our immune system, and have a complicated life cycle that sees them morphing across mosquitoes and humans and when infecting different parts of our bodies.

The new malaria vaccine acts against the P. falciparum, the most deadly malaria parasite globally and the one most prevalent in Africa.

So far, malaria figures have been reduced by drugs that kill the parasite, bed-nets to prevent bites, and insecticides that kill the mosquito. Bed-nets are the most widely-present preventive measure but only reduce malaria deaths in children under 5 by 20 percent—which is why the vaccine, despite its limited efficacy, is an important step.

“Today’s recommendation offers a glimmer of hope for the continent which shoulders the heaviest burden of the disease and we expect many more African children to be protected from malaria and grow into healthy adults,” said Moeti.

WHO described the vaccine on Wednesday as highly cost-effective and having a strong safety profile, with more than 2.3 million doses administered so far in clinical trials.