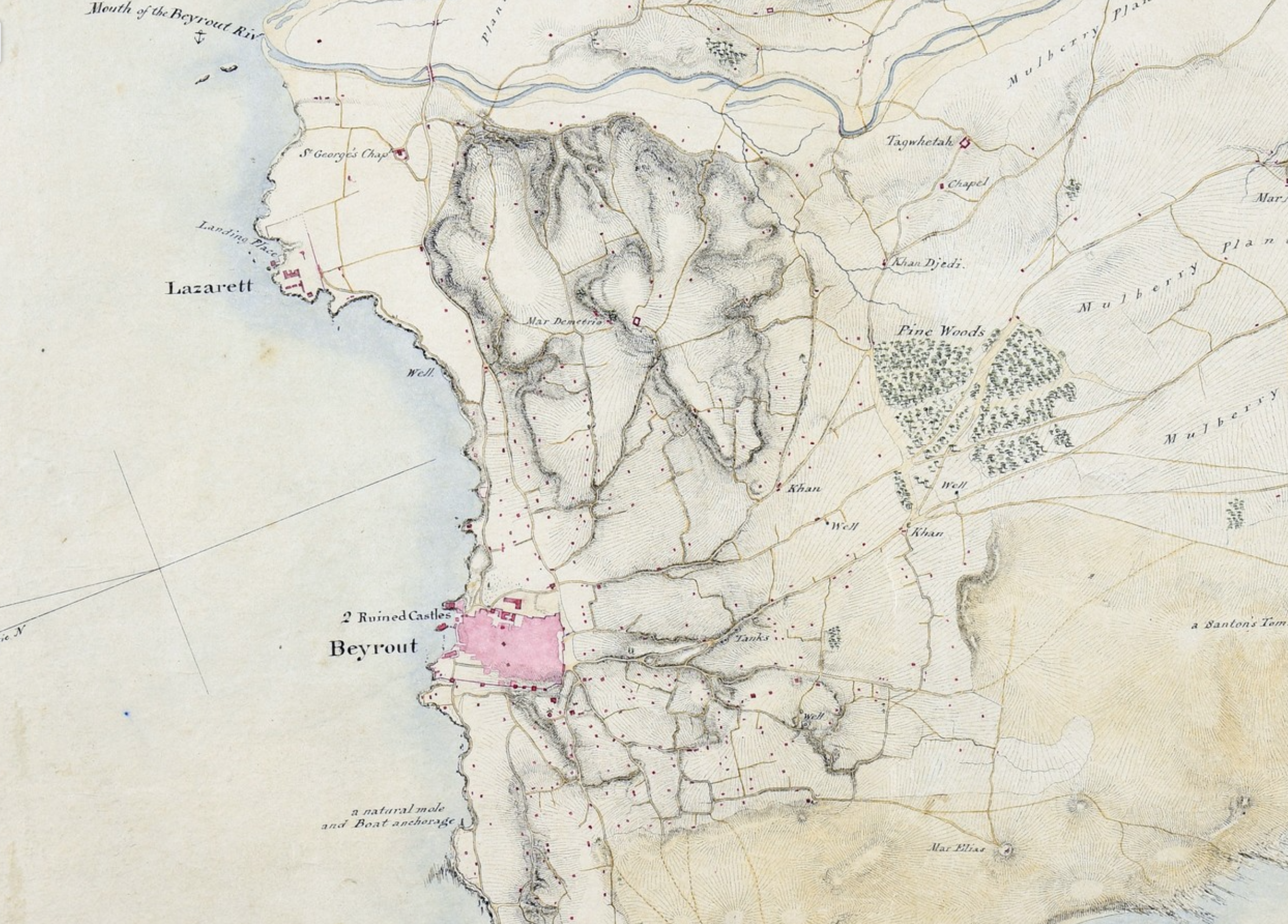 1841 Rochfort Scott map showing Beirut and the lazzaretto, where travelers would quarantine prior to entering the city.
Home
Better Living

Over the past year, we’ve all had to get used to quarantine as a “normal” part of our lives. Today in Lebanon, quarantining mainly entails isolating for two weeks after being exposed to a virus or coming back from abroad.

But almost a hundred years ago, this process was more elaborate and centralized. You couldn’t even enter the city before group-quarantining with your fellow passengers inside a designated area known as a lazzaretto. This was the case in Beirut, and many other cities, for ages before flying became a common mode of transport.

The rise of the Beirut Lazzaretto

The Beirut lazzaretto was built in 1835 by Mahmoud Nehme Bey in what is now known as modern-day Karantina –which takes its name from the Turkish word for quarantine. The location was chosen because, in addition to bordering the sea, it was on the outskirts of the old city, and therefore a safe distance from population centers.

At the time, the lazzaretto was composed of four sandstone buildings and fenced by flora. Its primary function was quarantining passengers coming into the city to stem the spread of cholera, which had plagued Beirut in 1821.

This process was described in an 1838 travelogue by British lawyer Charles Addison: Upon docking in Beirut, a boat would approach their ship to inform them that they were not allowed to land without quarantining first. An officer would then come on board to escort them by ferry to the lazzaretto for a military enforced quarantine.

After landing, those who could afford it were housed in rooms within the building that had its  own servants and the remainder had to pitch tents on the grounds. The passengers were not allowed to leave until a certain time had passed, but were allowed to roam around the compound and even go swimming in the sea.

An 1839 letter penned by Australian politician Arthur Holroyd specified the quarantine period of  sea travelers, military ships and steamers as  fourteen days and that of merchants as twenty-one days. Yet these rules were haphazardly enforced, as is the case today.

Holroyd complained that measures concerning timing were not equally observed, and were easily skirted with bribery or connections. For example, Charles Addison’s  quarantine lasted only seven days, despite the established rules.

Holroyd also revealed that healthy passengers were being mixed with sick ones, making the process self-defeating. This would all contribute to a mixed-bill in Beirut’s ability to ward off future epidemics in the city and its environs.

Since travelers and merchants could not enter without quarantining, the lazzaretto diverted traffic away from the ports of Tripoli and Saida to Beirut. This helped the city grow as a center of commerce.

Ironically, the growth reached a point where people started moving closer to the quarantine zone, raising safety concerns. In response, local officials made proposals in 1876 to move the quarantine to the Tripoli Islands, but this was rejected by the Ottomans.

The Lazzaretto in modern history

The Beirut lazzaretto continued to operate in the 1930s and 40s, when it became an important stop for those wishing to perform Hajj, the greater Muslim pilgrimage to the holy city of Mecca in Saudi Arabia.

According to Luc Chantre, regulation established in 1928 mandated that Pilgrims needed to be tested and vaccinated at one of several designated areas before traveling to Mecca. For those coming from Iraq, Iran, and India or from countries ruled by the French, they had to make a stop in Beirut to be vaccinated.

If passengers  had any prior diseases, they would need to be isolated first. In terms of process, they too were not allowed to leave until being cleared. In the meantime, they could busy themselves with the stores and restaurants that opened inside the lazzaretto, similar to today’s duty-free zones, or the park built inside it. After that, they would be issued a vaccine passport certifying that it was safe for them to travel and would leave Beirut  by ship to Jeddah through the Suez Canal.

The conversion to Karantina Public Hospital

During the 1948 Nakba, more than 700,000 Palestinians were forced to leave their homes. Many of the displaced refugees fled to Lebanon, where they settled in different camps. Some were temporarily placed in the lazzaretto, putting the quarantine out of service.

In the 1950s, the lazzaretto was converted to what we now know as the Karantina Public Hospital. It no longer borders the sea, as the Port of Beirut rose to encircle the area in 1978.

After the Karantina Massacre, the hospital was converted into the military headquarters of the Lebanese Forces, and would remain so for the duration of the Lebanese Civil War.

In 2016, it was renovated, but currently remains badly damaged by the August 4 explosion.