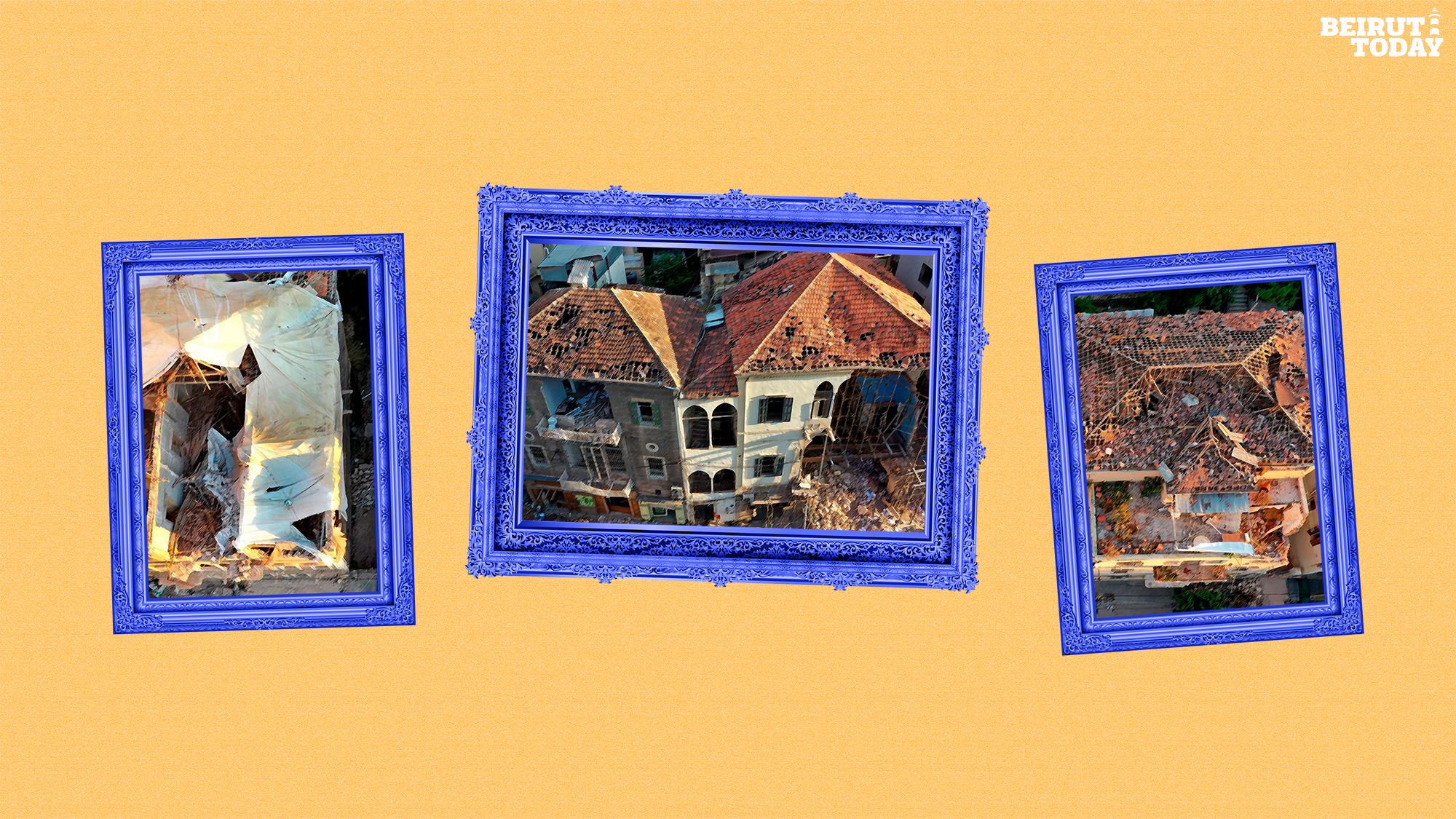 Cultural First Aid: Post-blast, can Beirut save its heritage and art scene?

The August 4 blast rendered some of Beirut’s vital cultural districts rubble, scattering shards of glass and precious heritage remnants across the streets of a once bustling city.

After the colossal loss of human life, heritage stands as the city’s second most hard-hit victim. The port explosion destroyed 8,000 buildings, including 640 historic buildings, from which 60 are at risk of collapse. Estimates show that $500 million is needed over the coming year to rebuild and renovate museums, galleries, historic buildings, and cultural institutions.

Before the cataclysm rocked the city, Beirut’s uniquely charming artistic bubble was already on the verge of popping. Lebanon’s cultural scene remains on standstill mode as it faces an economic collapse driven by currency devaluation and a crippling pandemic. The explosion decimated walls and windows which in many cases were the only tangible factors keeping creative economies together.

“Which normal do we go back to? We are in a state of emergency within an emergency,” said Rima Mismar, the director of the Arab Fund for Arts & Culture (AFAC), a regional foundation that launched the Lebanon Solidarity Fund to support creatives affected by the blast.

“On July 29, we announced the grantees of the Lebanon Solidarity Fund which was initiated in response to COVID-19 and the economic crisis. After the explosion happened, we had to re-launch it again,” explained Mismar. “Our first round of support will go to the most vulnerable –artists and technicians– and especially the ones that are freelancers or self-employed.”

Through an open call, affected creatives in Beirut can register “to streamline the process the best way possible” and a AFAC committee will decide on funds to cover house damage, physical injury, equipment damage, and workspace damage.

“If there was any kind of initiative from the public sector to support artists, we would not have found ourselves as organizations pushed to fill the gap,” said Mismar.

In the face of the inaction exhibited by the government after the blast, people flocked to the streets to clean, assist and rebuild. Since the start of the October 17 uprising, activists, civil society, and everyday people have found a rekindled sense of community and solidarity across Lebanon.

“In destroyed areas like Karantina and Mar Mikhael, you can barely find a speck of glass on the floor,” recalled Mona Hallak, heritage preservation activist and director of the AUB Neighborhood Initiative, about her walk with UNESCO’s Director General Audrey Azoulay on her visit to Beirut on the last week of August.

To Hallak, a communal bond in times of crisis in Lebanon is a double-edged sword. “In a way, we continue to prove that we are a society that doesn’t need much government support and it is working against us. Our resilience works against us,” she said.

Despite the state’s overall lack of response, the Directorate General of Antiquities from the Ministry of Culture has been working hand in hand with UNESCO’s “Li Beirut” initiative bringing together international, regional, and local organizations to ensure that Beirut’s historical heart will be preserved and rebuilt.

Li Beirut aims to raise half a billion dollars to recover the city’s arts and culture. To reach this goal, a UNESCO donors’ conference is set to happen in September to mobilize the international community. Azoulay made solemn promises to safeguard the city’s heritage and creative energy and “to prevent property speculation and transactions taking advantage of residents’ distress and vulnerability,” according to an official statement.

With her work on the ground with the AUB Neighborhood Initiative, Nusaned NGO, Beirut Heritage Initiative, La Fondation Nationale du Patrimoine, and APSAD (Association for Site Protection and Heritage Protection) to name a few, Hallak noted the need to “empower” the Antiquities department, which holds the power of issuing demolition or restoration permits but has been on the side of heritage preservation.

“I know of a sweet elderly couple whose house in Rmeil was damaged but was repairable. They insisted that they would like to welcome their grandchildren and die in this house rather than sell it.”

“It’s important that the civil society focuses on houses where the material damage can be fixed through small to medium funds,” said Hallak. “Heritage houses from the Ottoman and French mandate eras that suffer from structural cracks and demolished red-tile roofs are more complex and need large budgets, delicate restoration and architectural work, and the intervention of international actors. And, contractors have installed scaffoldings to avoid buildings falling.”

The renowned architect and curator, who played an integral role in the renovation of Beit Beirut, is planning symbiotic ways for the memory museum to help struggling cultural spaces in Beirut. A longstanding landmark that withstood the Civil War and now August 4 explosion, the cultural center aspires to document memories of the blast: the traumatic events and the convivial stories of how people came together after the tragedy.

“Beit Beirut did not suffer any major structural damage. We hope to play a role in supporting cultural institutions in Beirut that have lost their premises in the aftermath. They can use Beit Beirut as a recovery space and alternative exhibition space and in turn, we can benefit from their expertise in our collections and curatorial vision,” said Hallak.

Another Beirut institution preserving captured memories is the Arab Image Foundation (AIF) in Gemmayze, which collects and preserves photographs from the Middle East and the Arab diaspora. With glass and windows breaking, volunteers came in the following days to clean up and dust glass debris off book pages from the library’s extensive collection.

“Our basic assessment is that the collection is left largely undamaged but we have to go through every single photographic object,” said Vartan Avakian, a board member at the AIF. “We have arranged a makeshift room for now, where we always have the AC on and a humidifier on. The negatives can last in this situation for 3 to 6 weeks. We need to move fast enough.”

“One of the organizations’ missions is to save and conserve endangered photographic collections. The country’s economic collapse and the explosion led us to reinstate and work on our initial goal,” added Avakian.

Haven for Artists, a non-profit whose mission is to support local and regional artists, has shifted its focus and gathered its efforts upon the explosion to provide relief to LGBTQI+ individuals, migrant workers, and single women in Lebanon.

“We felt that these vulnerable communities were going to fall through the cracks in a crisis like this,” said Dayna Ash, co-founder and activist.

Due to the impending economic crisis, it’s been months since the NGO closed its Mar Mikhael “haven” where artists and creatives took part in residency programs and displayed their work. Shortly after renting out an office space, the blast happened and team members found themselves turning the space into a shelter fitting eight people.

Working with Anti-Racism Movement Lebanon, This Is Lebanon, and Egna Legna along with other queer emergency relief initiatives, Haven for Artists’ volunteers have fostered a safe non-discriminatory environment with social distancing measures in place to minorities in Lebanon that have lost their home and their job.

“We are covering the rent, the electricity, food, clothing, hygiene kids, diaper kits. We make sure to give [migrant workers]cash assistance in dollars so they can go back to their home countries,” explained Ash. “We insist on giving cash because it’s crucial for people that have lost their home and their job to at least regain some form of agency, have purchasing power, and decide their priorities. Psycho-social support is also coming in every week.”

Artists are also lending a spot on the non-profit’s online platforms to share their interpretations of the August 4 explosion. “There are many perspectives to deal with the bomb and having different ways to cope with it is okay,” said Ash.

Beirut is on its way to picking up its broken pieces and putting itself back together, but the problem goes beyond the need for a cultural first aid. Beirut’s art scene yearns for long-term recovery and prosperity.

“Looking forward does not mean we have to be resilient. Something is really broken inside of us all. How we can imagine ways to be living going forward is yet to be explored and seen,” said Mismar from AFAC.

Below is a list of donation links to all the organizations mentioned:

Arab Fund For Arts and Culture