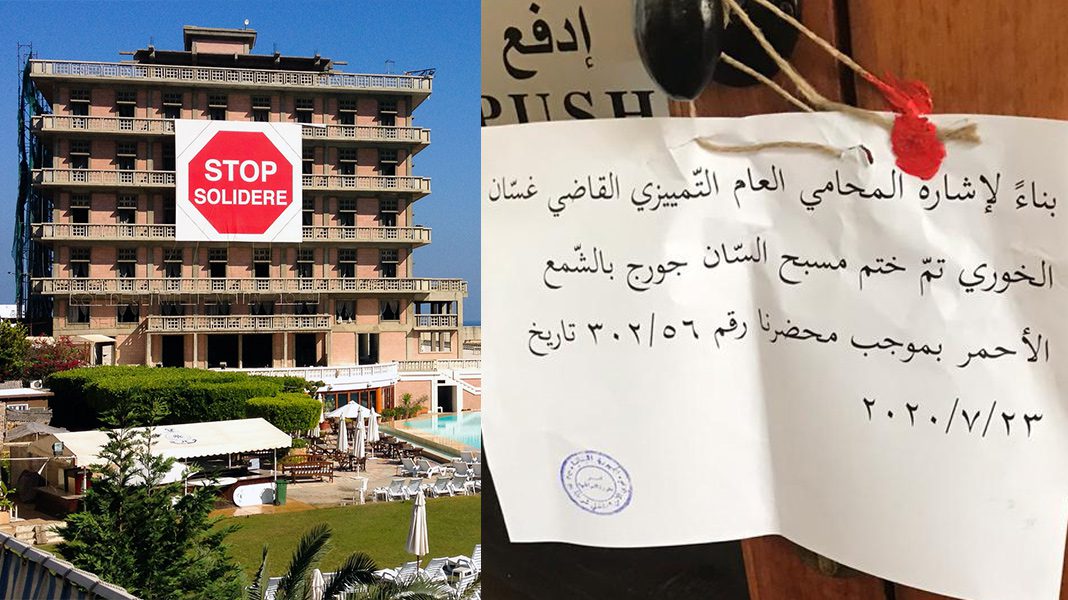 St. Georges Hotel to reopen after being sealed with red wax

The Saint Georges Hotel and Resort was reopened Thursday, July 30, after it had been permanently sealed shut by public prosecutor Ghassan El Khoury under article 302/56 of Lebanese law.

The article found the owner of the Saint Georges hotel, Fadi El Khoury, guilty of infringing on Beirut’s maritime property and liable to pay a fine of 2.5 billion Lebanese lira.

After refusing to pay the fine, the public prosecutor permanently shut down the hotel and resort even after El Khoury was granted a licence to rebuild and renovate the damaged landmark.

A new judicial order declared that the resort and hotel will be allowed to reopen, as the fine dates back to 1999 and is up for review with the Shura State Council.

The Battle with Solidere

El Khoury has been in a public battle against Hariri-backed construction company Solidere since 1994. El Khoury was initially approached by Solidere to hand over full control of the Saint Georges area. He refused and the company, backed by the Rafik Hariri-led government, ceased full control of the bay and area surrounding the hotel.

Solidere then blocked Saint Georges’ access to the sea with a thick concrete wall, in a move to intimidate El Khoury into giving up the hotel. El Khoury stood his ground, but the battle waged on.

In 1999, El Khoury was found guilty of infringing on Beirut’s maritime property and later fined with a notice of 2.5 billion Lebanese lira. El Khoury has since then refused to pay the fine.

In 2005, Hariri’s convoy was bombed just as it passed by the hotel, leading to Hariri’s assassination. The initial structure of the hotel withheld the damage, leaving the building with a burnt façade and El Khoury with plans of reconstruction.

El Khoury has been unable to renovate or rebuild the hotel since then. The pool and restaurant have remained open to the public, but the hotel itself stands as a grim reminder of Solidere’s suffocating grip on Beirut’s central district.

In protest, El Khoury erected a large “Stop Solidere” banner on the forefront of the hotel and another which states that the contract ends in 2019. In February 2020, El Khoury was granted a license to finally rebuild and renovate the hotel in order to restore Beirut’s historic landmark.

This comes in spite of the fact that a mere few meters away, Solidere was allowed to restructure Beirut’s bay and maritime property as it wishes to build Zaytouna Bay and the Waterfront area.

Since its inception, Solidere has gained a reputation for openly carrying out gentrification projects within Beirut’s central district to build spaces that only cater to rich and elite classes.

The difference is that while Solidere’s end goals are the ultimate gentrification of Beirut, El Khoury’s is the preservation of a landmark.

After years of battle, El Khoury will finally be allowed to carry out his plans.

See also: Manakeesh in Zaytounay? How protesters are reclaiming public spaces in Lebanon