The razor’s edge of Israeli apartheid: Annexation or ethno-state?

Israeli Prime Minister Benjamin Netanyahu may (or may not) begin to lead cabinet discussions concerning the proposed annexation of the West Bank this month. Media outlets, largely Western, have reported on this possibility, and its fallout, breathlessly.

They have given utterly confusing accounts of the annexation of Palestine, and even offered to explain “What is the West Bank?” These sweeping descriptions serve only to conceal the true brutality of the Israeli regime, and their actual plans for the West Bank, along with the Palestinians who live there.

What is to be Annexed?

“It’s time to apply the Israeli law and write another glorious chapter in the history of Zionism,” proclaimed Netanyahu, as he was sworn in as Prime Minister in May. Israeli “law,” according to Netanyahu’s proposal, will be applied in a wide swath of illegal settlements, as well as the Jordan Valley (the eastern part of the West Bank).

Combining the settlements and the Jordan Valley, Israel would be annexing more than one third of the total area of the West Bank.

Despite this recent Israeli aggression, it is important to note that this land, for the most part, was lost to Palestinians long ago. The idea that the Palestinians maintain any amount of serious control over their borders or land, independent of Israeli occupation forces, is fiction.

As it now stands, Israel constructs segregated highways, shoots Palestinians at military checkpoints, and demolishes homes all throughout the West Bank and East Jerusalem.

For the millions of Palestinians in the West Bank, annexation effectively happened in 1967 when Israeli tanks first rolled across the Green Line.

Importantly, the settlements and agricultural areas that Israel would potentially annex are largely of economic and strategic importance. However, they have meticulously avoided population centers, leaving Jericho in particular in a brutal position.

If the Jordan Valley is to be annexed, Jericho would be left isolated from all other Palestinian areas. Gaza is already under constant siege. Will the Israeli regime enforce the same lockdown on Jericho?

Ever since the signing of the Oslo Accords in 1993, Israel has been in a fairly consistent position regarding their absolute control of the West Bank. Why, then, has Netanyahu been so aggressively pursuing expansion as of late? Here the answer lies not in Tel Aviv, but in Washington D.C.

He was of course referring to the so-called “Deal of the Century” (officially, Peace to Prosperity: A Vision to Improve the Lives of the Palestinian and Israeli People). Even as it was announced in January, it was immediately decried as a “smokescreen” for annexation. 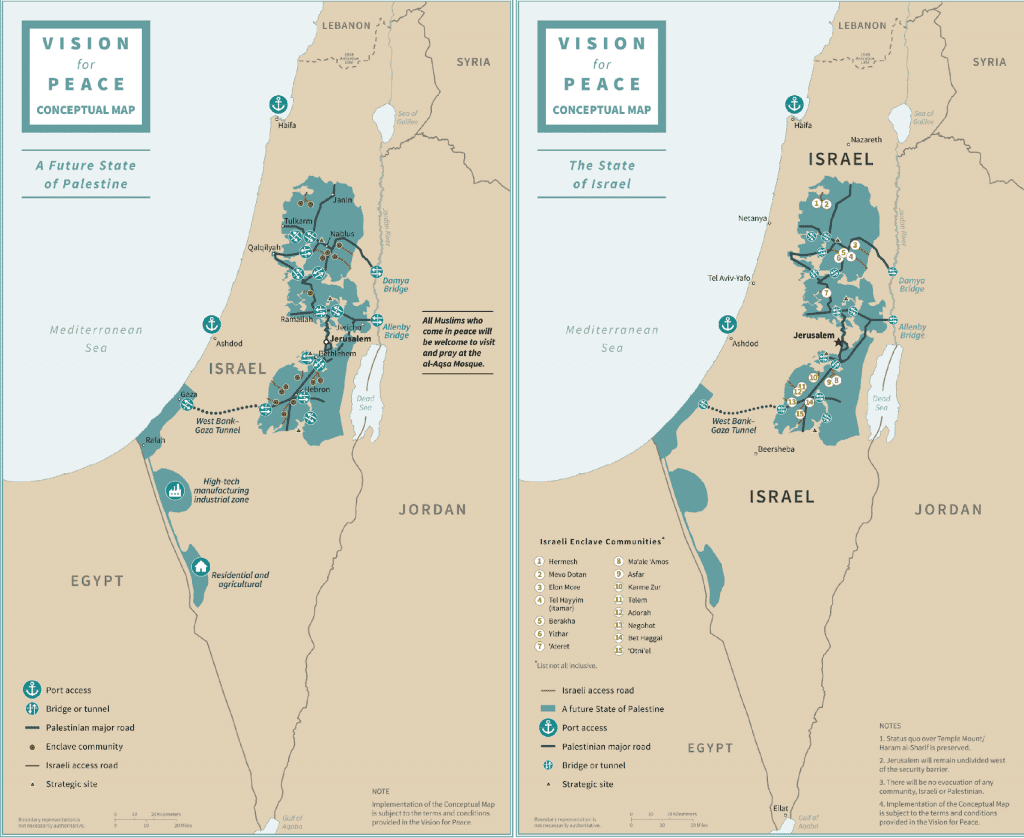 The plan revealed a hopelessly bifurcated “Future Palestinian State” that, among other concessions, would have to relinquish East Jerusalem as its capital, opting instead for locations on the city’s outskirts.

This “Vision for Peace” also contained the embryonic stages of annexation, ie, the recognition of Israeli settlements (illegal under international law) in the Palestinian West Bank.

Palestine, in the plan’s maps, looks less like a state, and more like a series of ghettoes, divided by border walls and settler-exclusive roads.

Judging by this one-sided “plan,” some form of annexation seems all but inevitable. With Trump approving the US embassy to change locations from Tel Aviv to Jerusalem, approving the final seizure of the occupied Golan Heights, and putting his stamp of approval on the settlements, why would he balk at a greater annexation?

Annexation is often presented as part of the alternative to the so-called ‘two state solution.” As any type of Palestinian state has been rendered hopelessly inviable by Israeli expansion, the only solution remaining is to form one state for both people, so the (compelling) argument goes. This annexation by Netanyahu, however, is of an entirely different sort.

His true vision appears to be, paradoxically, of an annexation that maintains the status quo. Netanyahu is seeking to legitimize the current situation on the ground, and further entrench it, all without facing the core contradiction at the heart of the Israeli state: its “Jewish and democratic” identity/branding.

If Israel were to annex the West Bank, and assume direct control of the territory, the lie inherent to their branding would have to be confronted. Do the millions of Palestinians become citizens, making Israel no longer a Jewish state? Or, more likely, do they remain brutalized and occupied, maintaining Israel’s status as an apartheid regime?

Until now, the Palestinian Authority (PA) has been useful to Israel in avoiding this uncomfortable realization. While the regime still effectively controls all of the territory between the Mediterranean and the Jordan River –that is, all of historic Palestine– they can deny responsibility for the Palestinians.

Instead, this falls on the PA’s shoulders. From dealing with COVID-19 to repressing protest, Israel routinely outsources their role as occupier to the PA.

In the event of annexation, the PA facade will break down entirely. Since its founding, Israel has proclaimed itself the “Jewish and democratic state” –the old retort being: Israel is only democratic if you’re Jewish.

Without the PA, it is difficult to imagine Israel accepting the Palestinians as citizens. Netanyahu himself, early in his career, described Palestinians becoming citizens as a “demographic threat” to the Israeli state. An ethno-state cannot exist, and be democratic, once outnumbered within its borders.

The regime has been steadfastly avoiding this conflict but if or when they face it, the Israeli authorities will assuredly continue their practices of segregation and apartheid, albeit much more aggressively.

Properly understood, this is what Netanyahu’s annexation means on the ground: more fences, walls, and checkpoints, along with an even more savage enforcement of the occupation. Until now, the PA has been the velvet glove over the iron fist of Israeli power in the West Bank. Very soon we just may discover precisely what apartheid looks like when the Bantustan finally falls.

Read also: Jowan Safadi: The Trials and Tribulations of Being An Arab Artist