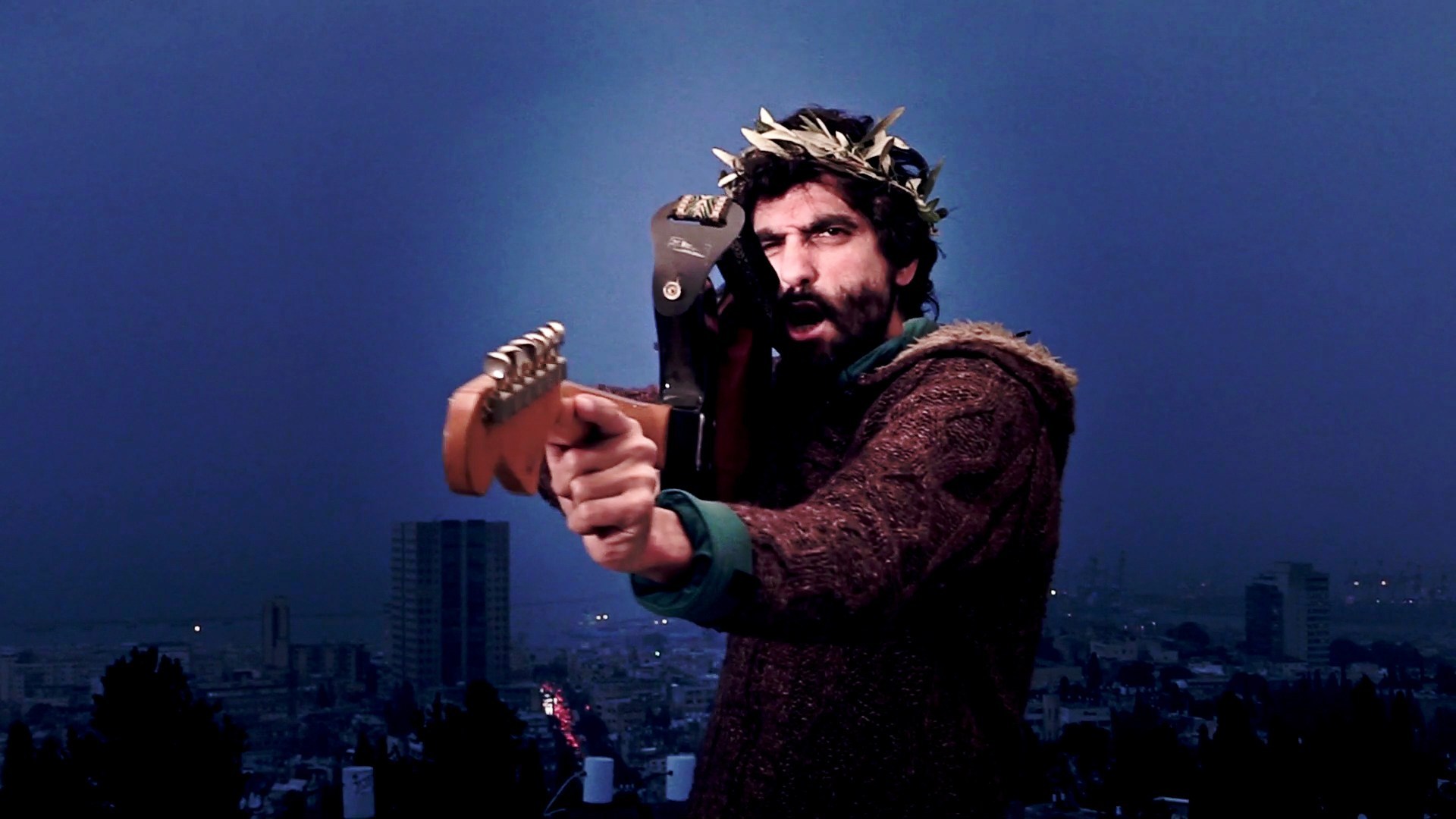 Jowan Safadi: The Trials and Tribulations of Being An Arab Artist

Perhaps the best introduction to Jowan Safadi would be to see him for yourself. The music video for ‘In The Arms of the Occupation’ concisely portrays some of his most interesting colours: sharply critical and subversive even in the face of controversy, wholly creative even without any serious funding or production value and, possibly most uniquely, incredibly fun even when singing about a dire topic such as the Zionist occupation that dictates his oppression.

As a Palestinian living within Israel proper, Safadi constantly pushes against the innumerable boundaries within his society. His art is the art of the satire and no one is safe from his derision; he submits to no authority other than his own will to speak out against the injustices around him. This radical nature doesn’t just reflect Safadi’s style, but rather his entire character.

Rebellion appears to be in his bones, and as always, this has resulted in him being labeled as controversial. He insists above all else on expressing the truth and stated in an interview, when asked why his truths are always so provocative, that “when the lie is mainstream, the truth will always be provocative.”

It is a thin line to straddle when a person’s artistic, political and moral urge to speak out against injustice and oppression is met with  the cold barriers of colonial, legal and religious authorities. On the one hand, Safadi has Israeli authorities persecuting him on grounds that his music constitutes incitements to violence, and on the other hand, he has local civic and religious authorities claiming that his music is blasphemous or anti-Arab (which once saw him detained in a Jordanian cell).

It is a thin line to straddle when a person’s artistic, political and moral urge to speak out against injustice and oppression is met with  the cold barriers of colonial, legal and religious authorities.

Although this all sounds very heavy, speaking to him (and listening to him) reveals a person who is in fact disarmingly humorous and forthcoming. He’s incredibly approachable and willing to speak at lengths about his experiences, his life and his music. Even though he discusses everything with a half-grin, always ready to twist his comments into a sardonic remark, his political thinking is still serious and significant for its exploration of the political realities he experiences and also the political realities all Arabs experience under their respective authoritarian regimes.

Artists from the Arab world know full well that censorship is a dark cloud hanging over the entire artistic process. From conception to production, the climate of censorship hinders our ability to freely express political and socially-critical motifs in film, music, literature, and more. The consequences of this are seen in the formation of separate groups involved with cultural productions.

For some, these taboo subjects are not worth touching upon at all, so they develop works that ignored them all together. There are others who wholly imbue the current conception of what is acceptable thought and, sometimes unknowingly, impose on themselves a form of self-censorship. These two constitute, in part, mainstream culture.

There also exists another group who, being aware that those topics are subject to censorship, find it necessary to express them anyway. It’s exactly this group, who intentionally subvert the mainstream, that constitute the counterculture. A strong, visible and politically active counterculture can feel deeply missed and desired in Lebanon, and perhaps in the region as a whole.

This local counterculture is something that I constantly hunger for and I’m sure many others do as well. That is why I was incredibly excited when I recently discovered Safadi and his unique blend of satirical music and political expression. He and his music provide a unique example of how artists can still make provocative and accessible political music even while living under harsh censorship regimes.

Safadi is, amongst other things, a provocative and principled political commentator. He, for instance, rejects the first group outlined above and would describe them as being willfully blind to the realities around them. His preference is of course found within the latter group as he believes standing up against injustice isn’t a choice but a moral and political imperative.

“I follow justice more than anything else.” Safadi tells Beirut Today. “I’m not opposed to the Zionist occupation because I’m an Arab. I’m opposed to it because I’m a human being who should have equal rights.”

Since his thinking is framed around notions of justice, as opposed to let’s say national, religious or civil affiliations, Safadi manages to avoid a trap that many on the left fall into. It would prove to be hypocritical, for instance, to condemn the political violence committed by Israeli forces while in the same breath willfully ignoring the oppression and violence committed by Arab dictators and the Palestinian authority.

Yet, Jowan Safadi’s music is not only significant for exploring the experience of being a Palestinian within an explicitly racist, anti-Arab state, but also for conveying grievances that are felt across the Arab world. It’s no wonder his new song, ‘Police Song’ (البوليس مش بوليسنا), is becoming increasingly popular in Egypt as well as in numerous other Arab countries.

In Safadi we have a poignant, clever and contemplative Arab musician that transcends national boundaries, providing us with great examples of politically charged art forms, that sometimes feels much needed in our region.

Safadi’s musical range is incredibly wide and not limited to any one genre. Some of his music is melancholic, some comical and some just plain groovy. At the same time, most of his music insistently takes on issues of freedom, colonisation and racism. These issues are also littered throughout Safadi’s latest album ‘Stay Away from the Mid-Evil East and Sing for it (ابعد عن الشرق وغنيله)’.

A glimpse into his previous work, and this album, demonstrates Jowan Safadi as a political artist who has honed both his musical and lyrical skills overtime.

Take an earlier song like “Poor Infidels”. Safadi sought in this song to criticise religious thinking that has essentially condemned him (and many of us) to eternal damnation. To do this, he combines descriptions of heaven and hell with a ludicrous and almost nursery-like synth-track; the satire, and the criticism of such beliefs, is hard to miss. It’s this song, alongside a couple others, that saw him detained during a tour in Jordan under charges of blasphemy.

The other end of Safadi’s music, “To Be an Arab”, serves as an example of music (and music videos) as means of targeted, political activism. Through this project, Safadi wanted to call out the hypocrisy of Arab-Phobic Mizrahi Jews (Arab Jews) and also to try to bridge the gap between what he sardonically labels as ‘imported’ and ‘local’ arabs.

“It’s a very conscious song,” Safadi told Beirut Today, “I knew exactly what I wanted to say, when, to who, and how and the best way for them to perceive it.”

This is why he decided to sing for the first time Hebrew, so as to reach out to the Mizrahi and urge them not to align with the white European colonists in Israel but rather to come to terms with their Arab origins and join ‘local Arabs’ in their resistance against Zionism.

Whereas ‘Poor Infidels’ displays the fun, childlike playfulness in Safadi’s musical and lyrical style, ‘To Be an Arab’ more clearly depicts his intentions as an active instigator for societal and political change. Both songs combined cements Jowan Safadi as a uniquely skilled, critically-minded satirical musician.

Stay Away from the Mid-Evil East and Sing for it

If there’s any hint that Safadi’s latest album will feature some of Safadi’s most layered and cryptic lyrics, one need look no further than the album cover itself. The name of the album is a comical play on a well-known Arabic proverb, ابعد عن الشر وغنيله, (loosely translated ‘stay away from evil and sing for it’).

As the title suggests, the album is a lamentation of the limitations and oppressions common under the regimes we live under in the Arab world: be them national, religious, civic or sectarian ones.

To name just one example, in Situation Uneven (الحال مايل), Safadi sings “they besieged the Arabs’ minds with a million red lines.” These red lines, imposed by local and foreign national leaders and also by the religious authorities, are the limits of what is considered acceptable within public discourse.

Safadi constantly struggles against these red lines, but that always comes with a price.

“When you cross those red lines you’re not safe anymore,” he says, “I crossed that line, a long time ago. I didn’t meant to. I didn’t think they were seriously there.”

Singing across the line

Even though he faced serious repression and censorship, Safadi refused to stop making music or be silenced.

Safadi tells Beirut Today, however, that at times he “wanted to commit self-censorship, to return to that safe feeling, but it doesn’t work. If you now suffer from feeling insecure, you will start feeling even worse, cause you’re not free. You’re not completely free and you’re not completely safe. Ever.”

His solution to this dilemma: word-play. “This whole era, since my detention in Jordan for insulting religion, I was unable to write or sing really,” he says, “So I started to play around all the time, with word play, so that the authorities won’t understand. The problem is the people might not be able to understand either.”

Yet his lyrics still manage to present themselves as clearly and critically political, even though some of his more damning prognoses are actually left between the lines. It’s a balancing act that isn’t specific to Safadi; all artists living under censorship regimes experience the same issue. If nothing else, his determination and youthful voice poise Safadi as being akin to a modern day protest singer.

Artists across the Arab world can learn a thing or two from artists such as Safadi, especially if we wish to create a strong counterculture. If we don’t want to compromise our message, we must find other means by which to communicate our more subversive themes. This could be through allusion, allegory and satire.

Most importantly, we must hold on to the strength of our convictions and insist on the freedom of our art and freedom of expression. Safadi’s strength of will, exemplified in his statement that “you have stand for what you have to stand for,” sounds like a call to action, a moral imperative that everybody, especially artists, should abide by.