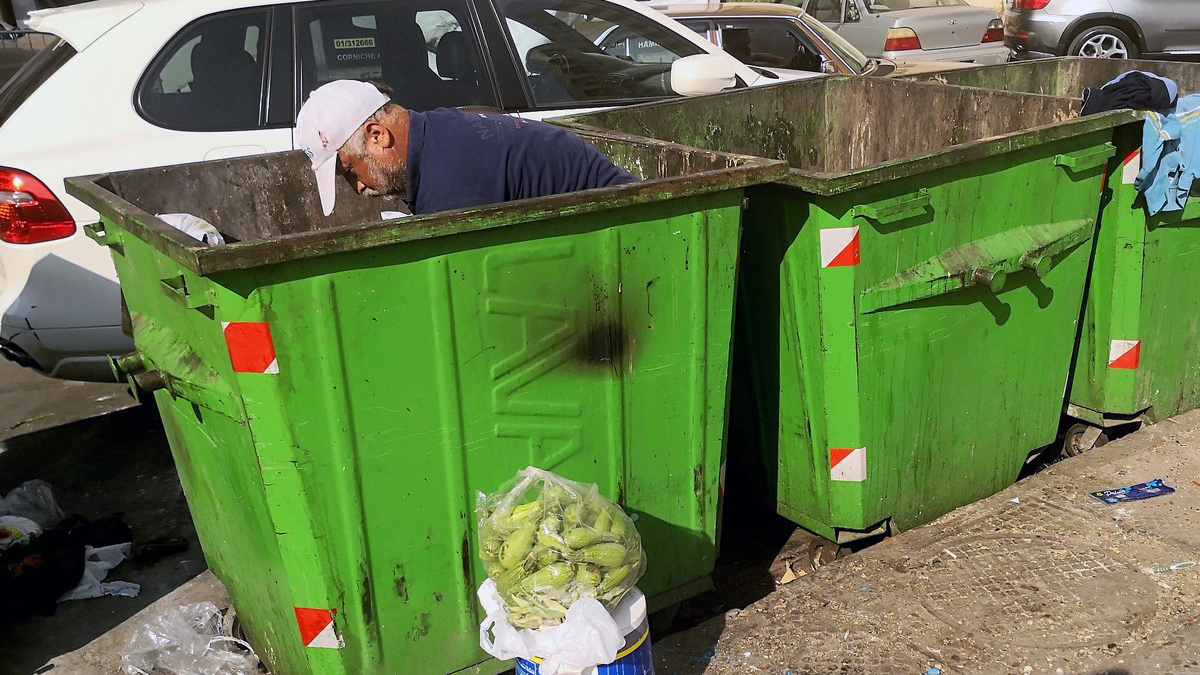 Lebanese at risk of famine as poverty soars

Lebanon may suffer through a famine amid the rise of food prices due to the devaluation of the local currency by more than 40 percent in the past week alone, a food security expert told The Telegraph.

Lebanon has been going through an economic and financial crisis since mid-October 2019, and it has come to manifest itself as the worst in the country’s history, surpassing the painful days of the civil war.

When COVID-19 began to spread, Human Rights Watch said that millions in the country may go hungry because of the coupling of the pandemic with Lebanon’s economic crisis.

More recently, the international group expressed concerns with the government’s social response to the pandemic as part of an article on “Protecting Economic and Social Rights During and Post-Covid-19.”

“In Lebanon, where the spread of Covid-19 compounded the economic crisis that has been roiling the country since 2019, the government announced plans to provide food assistance that did not materialize and financial aid that was significantly delayed and insufficient to provide for families’ basic needs,” reads the Human Rights Watch article.

The Lebanese pound, previously pegged at LL 1,500 for every dollar, has now sunk to an unprecedented value of LL 9,000 per dollar as the country grows poorer by the day.

Losses within the financial system are estimated to be at $61 million, after years of government-theft and crippling sovereign debt.

The prices of food items alone have hit an inflation rate of 200 percent, and many households across the country have begun stockpiling.

Massive lines queued up at local bakeries in fears of a possible shortage, as millers are burdened with paying in dollars to import wheat and flour from abroad. Some supermarkets have begun to limit the amount of bread one can purchase to one loaf per person.

The Lebanese government also raised the price of the partially subsidized bread from LL 1,500 to LL 2,000 this week, the first change to the product in eight years.

Fuel and oil prices are expected to be affected next as political leaders warn their factions about the crisis. Lebanon’s economy relies heavily on imports, especially with foodstuffs.

Lack of state investment and political negligence have crumbled the agriculture sector, previously a vital drive in Lebanon’s economy. Corruption has leaked its way into the sector, exploiting farmers and their resources.

The National News Agency reported on Tuesday that army officials would no longer be served daily meat as meals as the military suffers under the weight of the crisis.

In response to the ongoing crisis, individuals have taken to the streets since October in protest of the current living conditions. The current government, led by Prime Minister Hassan Diab, was put in place in order to form a rescue plan for the economy.

Since its formation, it has yet to offer any solutions but to negotiate with the IMF for a loan to aid its current citizens. Negotiations have been ongoing since May, but due to political tensions within the parliament, few feasible solutions have been made.

Last month, Diab wrote an opinion piece in the Washington Post where he said that Lebanon was on the verge of a food crisis. He explained that Lebanese citizens are already refraining from buying meat, fruits, and vegetables and may soon struggle to afford bread.

Finance Ministry Director General Alain Bifani announced on Monday that he would be resigning, making him the second senior negotiator with the IMF to do so. Bifani cited obstacles facing the talks, such as “vested interests” as grounds for negotiation that undermine the government’s economic recovery plan.

Bifani, in a news conference, announced that a “criminal campaign” was threatening to thwart the plan and urged negotiators to adopt a different approach to aid Lebanon as soon as possible.

“Today, we are witnessing a new stage of taking over the Lebanese assets, a crushing of the poor, and forcing those making minimum wage and basic salaries to foot the lion’s share of the bill,” said Bifani.

The IMF has urged Lebanon’s MPs and ministers to set aside their differences and work towards rescuing the country since May.

Read also: How do we prevent the total collapse of the Lebanese pound?

Unemployment is reaching unprecedented heights, with talks of emigration increasing in popularity among sectors of the population.

However, with increased capital controls from banks, many are unable to withdraw their money or purchase plane tickets. The country’s local airline, Middle East Airlines (MEA) is currently the only one running flights from Beirut’s Airport, which is expected to open at 10 percent capacity on July 5.

MEA is also currently only accepting payment in dollars and online, difficult for a chunk of Lebanese citizens with card restrictions imposed by the bank.

Expats and citizens alike engaged in a boycott campaign for the airline over the weekend, citing its $1,000 tickets unaffordable and accusing MEA of exploiting the pandemic as a means to generate profit.

MEA has come heavily under criticism over the past few months as citizens sought repatriation flights at sky-high prices during the COVID-19 crisis.

Under these conditions and more, the people of Lebanon seem to be heading towards starvation.

In an interview with The Telegraph, Assistant Professor in the Food Security Programme at the American University of Beirut Martin Keulertz predicted that Lebanon may witness a famine, the like of which has never been seen since the Great Famine of 1915 – 1918.

Keulertz predicted that by the end of the year, 75 percent of the population will rely on food handouts, which may not even be present by then.

The coronavirus pandemic has only worsened the situation. As Lebanon entered lockdown in mid-March, the lira was still pegged at a value of LL 2,000 per one dollar. With fears of a second wave of infections approaching, it is unsure how badly the economy will be hit this time around.

With many left with no way out and the inability to remain, the future of Lebanon is looking very bleak.