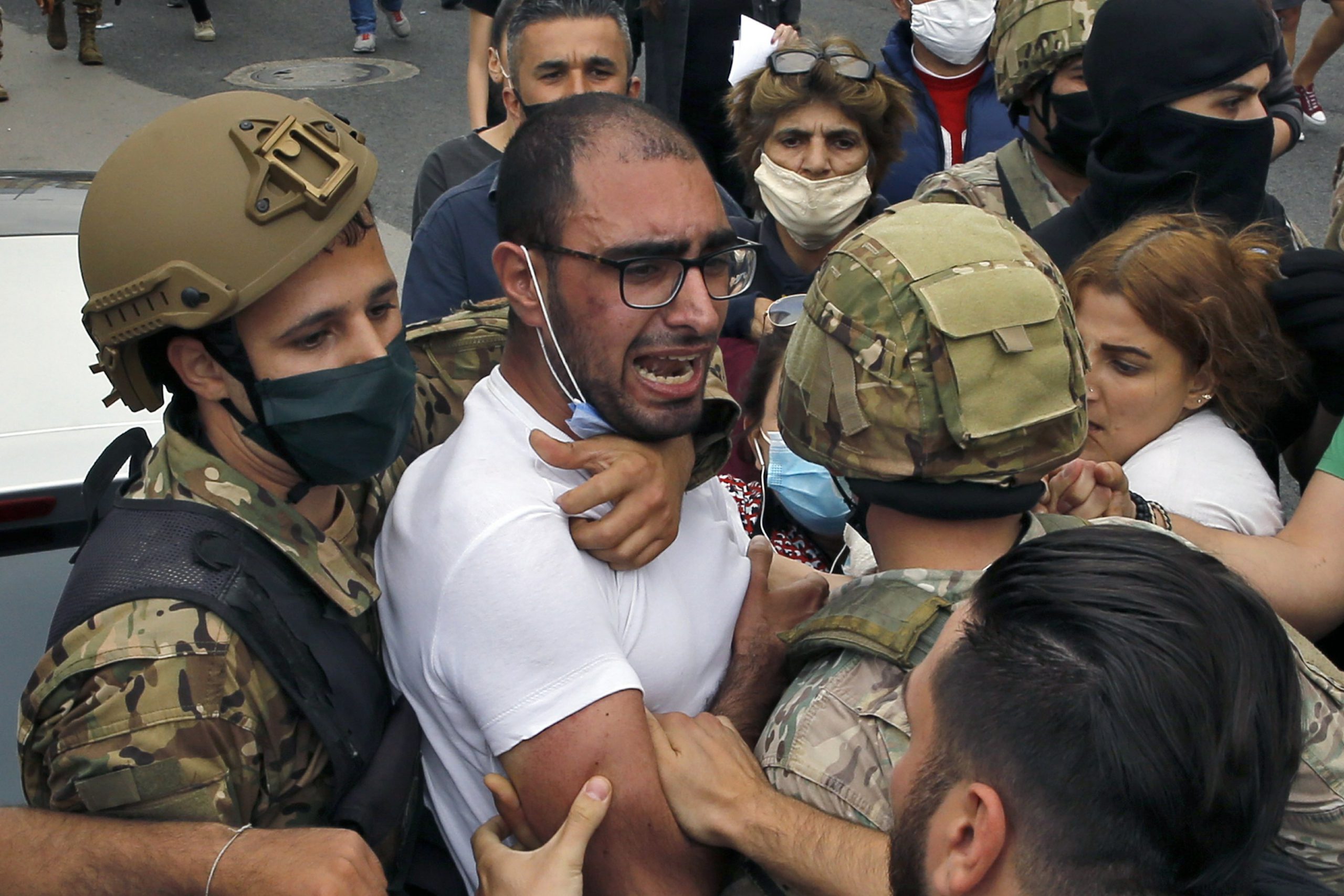 Clashes between the Lebanese army and protesters in Zouk Mosbeh, Lebanon, one of the many locations where demonstrators are demanding their basic rights as Lebanon’s economy crashes and the price of basic goods rises. (Photo: AP / Bilal Hussein)
Home
Community Voices
Activism

Violent clashes between security forces and protesters have left one dead and dozens injured in Lebanon, where unprecedented inflation, increasing poverty, and worsening living standards have sparked rage.

The Lebanese army used live bullets, rubber rounds, and tear gas to disperse protesters in Tripoli on the night of Monday, April 27. Earlier today, the funeral of Fawaz Fouad AlSamman was held. The 26-year-old protester passed away from internal bleeding after being shot in the leg by the army.

For the past two nights, thousands of protesters burned tires to block roads and set fire to commercial banks using Molotov cocktails across the country. Clashes between protesters and security forces have been particularly felt in Tripoli, Lebanon’s second-largest and poorest city.

Widespread panic has been felt among millions of Lebanese citizens, whose savings have lost more than half their value in Lebanon’s worst financial crisis since the country’s 1975 civil war. The protests were sparked by the unprecedented inflation across the country, as the lira reaches new levels of devaluation at a rate of LL 4,000 for every US dollar.

Citizens of Tripoli gathered to pay their respects in front of a small shop Fawaz AlSamman owned near Al-Nour Square, a popular protest spot for demonstrators since the start of the October 17 Revolution.

“Fawaz is a martyr of this revolution,” Fatima Fouad, AlSamman’s sister, told Al-Jadeed in a televised interview today. “This revolution will continue with Fawaz’s blood. We’re very aware that we’re going to pay with even more blood to dismantle this entire system, from the banks to the successive governments that have come.”

Tensions continue to rise following AlSamman’s funeral, with another bank set on fire in Tripoli less than an hour later. The Lebanese army, once again, launched tear gas to disperse protesters.

Demonstrators in Tripoli and across the country took to burning down banks using Molotov cocktails. Protesters have become increasingly frustrated with banks, which continue to impose impoverishing capital control measures because of the dollar shortage in the country –combined with decreased opening hours and access to money resulting from the COVID-19 lockdown.

The crisis is the worst of its kind in recent history, and only worsened as a result of the recently-extended lockdown. The social distancing measures, although essential in curbing the disastrous effects of a mass outbreak in the country, did not include a social safety net that takes into account the catastrophic effect the lockdown may have on the country’s economy.

No more selmiyye, targeted violence Is the new norm

As their very last resort, protesters are taking to the streets for the sixth month since the start of Lebanon’s anti-government revolution.

What differentiates these protests from those in October, is that targeted violence has become the new norm adopted by demonstrators –and they are not to be looked down upon for it.

During the months when protestors took to the streets in peaceful forms of protests, they were degraded by politicians and attacked by security forces all over the country, from Sour in the South to Tripoli in the North. Their demands remain ignored to this day, banks have not lifted their policies, and the economic crisis which initially drove people to the streets has only worsened.

“The state is characterized by its repressive apparatus, and its main objective is to reproduce itself, its rule and its power,” Nadim El Kak, a researcher at a local think-tank, told Beirut Today.

“In the case of Lebanon, the stakes for relinquishing power are so high,” he continued, “Meaning that if the political elite are to give up power, they are likely to be held accountable for the mistakes they’ve made and the impacts they’ve had on the current state of society, the economy and what not.”

Incredible scene of #Lebanon protesters confronting, pushing & pulling a police officer who is waving around a pistol, apparently during an attempt to detain a protester.#LebanonProtests #لبنان_يتنفض https://t.co/tfKrpThTw1

According to El Kak, revolutionary tactics that rely on peaceful or nonviolent means of protests are largely ineffective at this point, and the Arab spring stands as an example to that.

When countries across the Arab World began to protest against their regimes, they found that the only way to counter the violence imposed on them and achieve their rights was to seek violence themselves.

Debates have been sparked surrounding the topic, with local influencers and opinion leaders taking to condemning the use of violence. Yet in the simplest of terms, the people of Lebanon are hungry, barely able to see beyond surviving the present time, and they have exhausted all resources.

The general sentiment is that past and current politicians do not care for the general good of the country. Otherwise, they would have sacrificed their personal profit for the survival of an entire population.

When citizens were offered a one-time, measly amount of LL 400,000 as support for the most impoverished during COVID-19, many rejected it. Temporary (and incredibly cheap) solutions no longer aid them in surviving.

As the lira’s market value plummets, this sum amounts to $100.

THREAD: We are approaching the second wave of the #LebanonProtests, which will likely resemble #October17 in some ways, but will also distinguish itself and test people’s resolve in others. A few things to expect and keep an eye on:⬇️

Many are now seeking immigration to countries they believe will provide them stability and a better lifestyle, but this is a luxury many cannot afford –especially not in times of COVID-19. As such, they are realistically trapped in a country that does not want to offer them a decent life. Should they wish to remain in the country, to live honorable lives and raise their children accordingly, they will have to take to the streets.

Reform in a tiresome and broken sectarian system is no longer the goal, but overthrowing the current regime is what many are coming to preach. The situation will only escalate from here on, and for good reason.

“I’m sure that those living in poverty, deprivation, hunger, and destitution will not forget Fawaz,” continued Fatima in her Al-Jadeed interview. “Maybe the media and those watching will forget with ease, but we won’t forget him. We’ll go on. We’ll allow all the frustration we’re feeling now to turn into anger. And this anger, we’ll invest it into this revolution. I am certain that this revolution, despite all the blood we’ll pay, will arrive to its purpose. And that we’ll be able to, some day, live in dignity and get our most basic rights.”