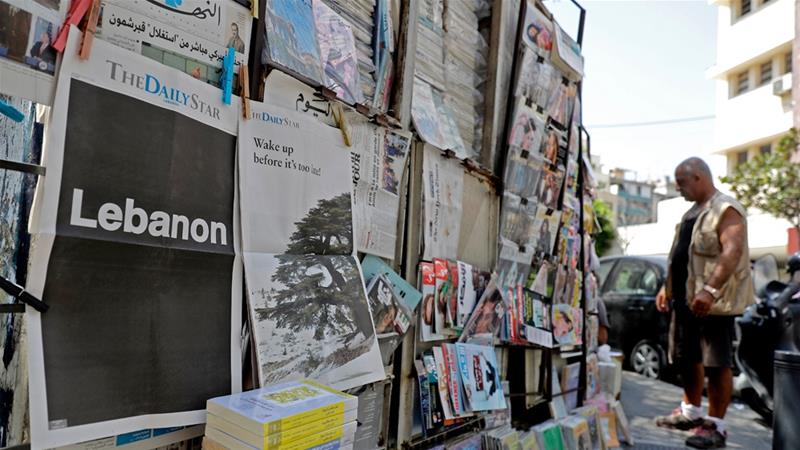 The Daily Star has temporarily ceased the publication of its print edition due to financial challenges, according to an announcement published February 4 on the newspaper’s website.

TDS was Lebanon’s only English-language daily print publication and is co-owned by the family of Lebanon’s former prime minister Saad Hariri.

“A drop to virtually no advertising revenue in the last quarter of 2019, as well as in January of this year, compounded the already dire financial situation that has ravaged Lebanese newspapers with the rise of digital media and years of dwindling spending on ads as a result of the years-old economic slowdown,” TDS announced, adding that it would continue to publish online content.

Other Hariri-linked news outlets have also suffered from the worsening economic crisis in the past year. Al-Mustaqbal, a 20-year-old newspaper, stopped printing in January 2019. Future TV also announced its suspension in September 2019 after employees had been on strike over unpaid wages. TDS employees had also recently complained about not being paid consistently, with one journalist reporting that some were owed up to 6 months of wages.

Are we really surprised? On the limitations of print journalism

The Daily Star is behind some great and innovative journalism in Lebanon, but print publication is costly and has low returns. When you pursue a degree in media, one of the first lessons you learn is that “media are first and foremost businesses.”

I can admit that I find myself strangely drawn to print publications, but I am entirely aware that my attachment is purely sentimental. Seeing your name in print might feel nice, but online news platforms can offer exactly what print outlets offer at a cheaper (and more environmentally-conscious) cost.

The global, and local, landscape of media is constantly changing. While the Daily Star says it hopes to “return to newsstands as soon as possible,” perhaps it would be better for its management to focus on improving its more modern means of news dissemination.

Newspapers are no longer profitable. The past two decades have brought about the rise of easily-accessible digital content, forever changing both the dissemination and consumption patterns of news. Many in the media industry have recognized and adapted to the ubiquitous use of smartphones, social media, and search engines by news consumers across the globe.

Younger generations consume news differently, as our parents did before us, as their parents did before them, and as our children (or friends’ children, since it’s no longer a taboo to admit that some of us might now want children) will do after us.

As is expected with older technology in the face of newer tools, printed outlets have struggled to stay afloat because people either need or want to consume a product, and neither is applicable to newspapers today.

With news flooding their social media feeds or breaking news applications notifying them on an hourly basis, nobody needs newspapers anymore. And with the limitless possibilities offered by digital written and audiovisual content, newspapers are simply no longer desirable. It’s not surprising to see that investors have moved away from newspapers.

Are we really sad? On the freedoms of digital press in Lebanon

Separating media from politics, particularly in Lebanon, is impossible when discussing traditional outlets. Mainstream outlets, like The Daily Star, are owned by politicians.

TDS was bought by Hariri affiliates in 2010, perhaps out of an understandable necessity to survive. But the past 10 years have proven that alternative, and admittedly more difficult, solutions do exist. These solutions help media outlets maintain their independence and their journalistic integrity.

If conversations with multiple independent journalists and editors have taught me anything, it’s that there’s no one way of doing it. Independent outlets do everything from optimizing online advertising and selling merchandise to creating content that ethically-conscious brands can distribute on their own pages and running communications businesses that can help sustain their passions.

With a list of endless possibilities, a well-established and beloved outlet like The Daily Star can find innovative ways to make more revenues, pay its staff, and grow its online audience.

The internet also offers smaller news outlets opportunities to bypass all the red tape that Lebanese authorities place to stop independent thinkers from emerging. A 1964 press law in Lebanon limits the number of political print publications, meaning that independent news platforms (like Beirut Today) have no chance of being legally allowed to print in Lebanon.

With all this in mind, we wish the best of luck to our colleagues at The Daily Star.

An IMF bailout would wreak havoc on Lebanon’s economy