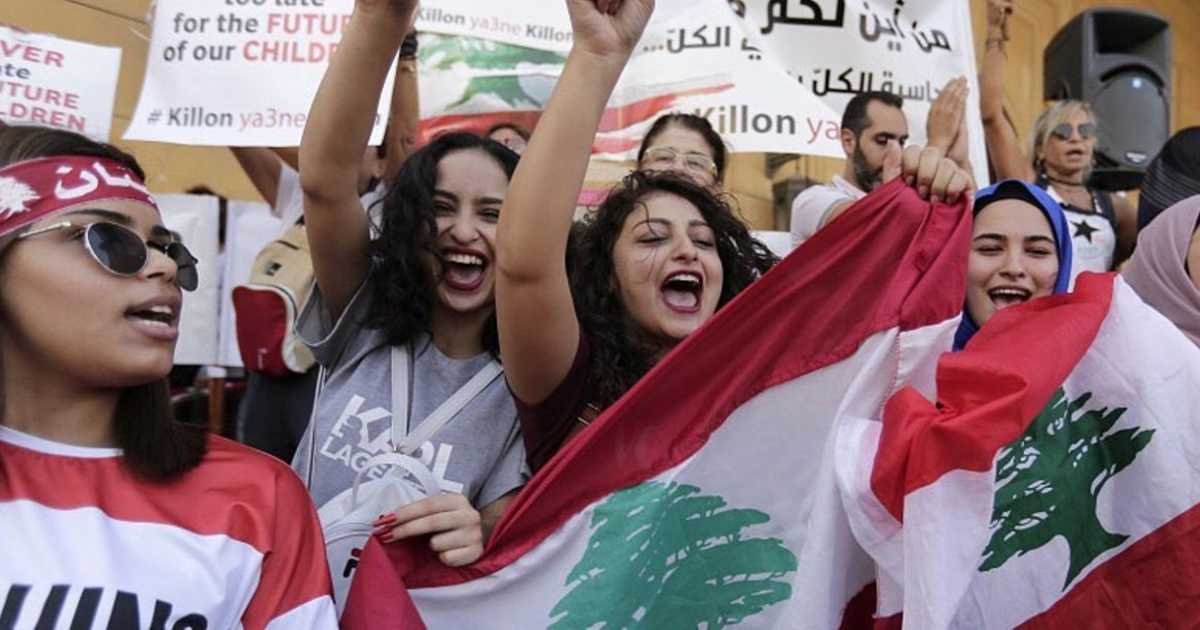 Women are on the frontlines of the Lebanese protests

“Our bodies are ours” female protesters chant across the streets of Beirut, a city whose walls have been spray painted with the slogan “Feminist Revolution” during the ongoing anti-government protests.

The last 40 days or so have given Lebanese women enough courage, space, and hope to express themselves. Like the men, they demonstrate against corrupt politicians who have led the country into an economic crisis and against the sectarian political system that often leaves the country in political deadlock. But women also use the protests as an opportunity to demand better rights and gender equality.

Surrounded by Lebanese flags and patriotic banners, a woman lifts her newborn baby over the crowd at Martyrs’ Square. She is one among many mothers who bring their children down to participate in the protests. Young women from different religious backgrounds stand together shoulder to shoulder at the frontline of the peaceful protest, chanting about their dissatisfaction with the political system.

The parking lot in Downtown Beirut, where thousands of demonstrators have been protesting, is filled with pavilions. Different organizations and movements have reclaimed the area as a public space, creating temporary meeting points where the current situation can be dissected, debated, and discussed.. They all have the same goal in mind: the politicians must resign.

One of the pavilions represents the feminist movement. It emerged spontaneously during the demonstrations and consists of various individuals and organizations that have been fighting for women’s rights in Lebanon. 23-year-old Farah Baba is one of the initiators. She believes the protests have created more space for female activists to demand better rights and gender equality.

“I see feminist graffiti, I hear the rallying of women’s rights throughout Lebanon,” said Baba. “Formerly, the demands of better rights for women had only been shared in specific groups in Beirut, and now these demands have become part of the demonstrations across the country.”

She is demanding that all politicians resign, and that the political system is altered to allow more space for women to take on leadership positions.

“The people want to change the corrupt, sectarian system, and within these changes, the people will gain a lot of other rights,” said the activist, “As long as each religious sect has its own laws, women will always be oppressed. If the politicians step down, we can have a better opportunity to change the laws on women’s rights.”.

Protester Malak Alaywe established herself as “a symbol of the revolution” by many of those on the streets after a video of her kicking a minister’s armed bodyguard in the crotch went viral on the internet in the early days of the protests.

Dr. Carmen Geha, an assistant professor at the American University of Beirut who specializes in political representation of women and protest movements in the Middle East, has been following the demonstrations closely.

She has noticed the importance of women’s roles during the protests, how they have been strongly represented and have mobilized themselves through student groups, feminist movements and as leaders of trade unions.

“Women have been very visible and very present during the protests,” said Geha. “They have been shouting out their demands for better rights. In doing so, women are showing how they are demanding to be a part of political processes and how they want to set the political agenda.”

While Lebanese women have been very visible in the ongoing protests, it is false to assume that this is the first time they are present on the streets. They’ve been present throughout history, protesting and demanding better rights for themselves and for all.

Despite that, they continue to be underrepresented in Lebanese political institutions and in the workforce. Today, only 6 out of 128 members of Parliament are women, while only 1 in 4 Lebanese women have jobs or are seeking them.

Carmen Geha is convinced that a showdown with the male-dominated political system will create more space for women in politics, and further interests in promoting their rights.

“If the political system actually changes and is developed, I am convinced that women will be the first beneficiaries to sense the improved conditions and rights.”