Why Lebanon Should Invest in Women’s Labor Force Participation

For the past decades, governments in the Middle East and North Africa have looked for ways to revive their fragile economies, and Lebanon is no exception. The solutions pitched to boost the Lebanese economy all seem to rely on external factors, with some putting their hopes on oil and gas revenues in the future and others switching their focus to tourism from the Gulf.

While solutions that depend on external factors are hard to attain and risk being unsustainable, Lebanese officials and other Arab leaders continue to overlook the one structural reform that would undoubtedly strengthen their economies: the full integration of women in the labor force.

As put forward by data on the Lebanese female labor force participation rate, only one in four Lebanese women above the age of 15 has a job or is currently seeking employment. The remaining 75 percent do not work, often because they are structurally and legally impeded from entering the formal labor force.

It is important to note that this is a structural problem and not a cyclical one, emerging from the current and recent economic developments. 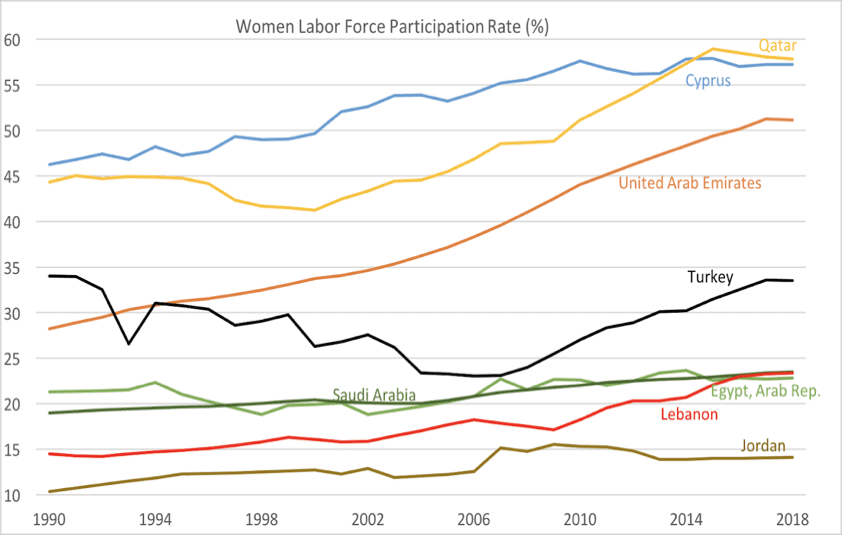 Women, Education, And the Labor Force

Indeed, in addition to its very low rate of female labor force participation, Lebanon also ranks amongst the worst countries in the world in terms of its gender gap, an aggregate indicator designed by the World Economic Forum to measure the gap between a country‘s status quo and full gender equality. 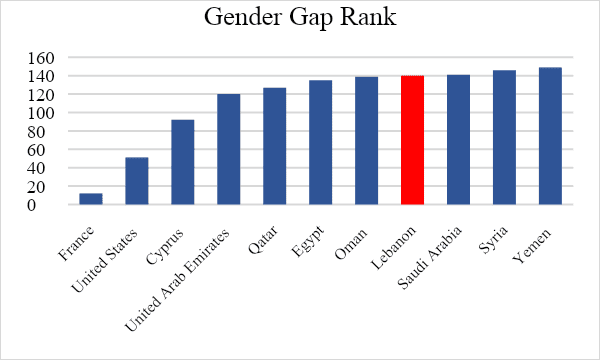 Despite a good education score, Lebanon ranks 140 out of 149 economies in the world because of its ridiculously low scores in political and economic equality. Algeria, Morocco, the United Arab Emirates, Egypt and Turkey are all doing better than Lebanon even if they also score poorly. 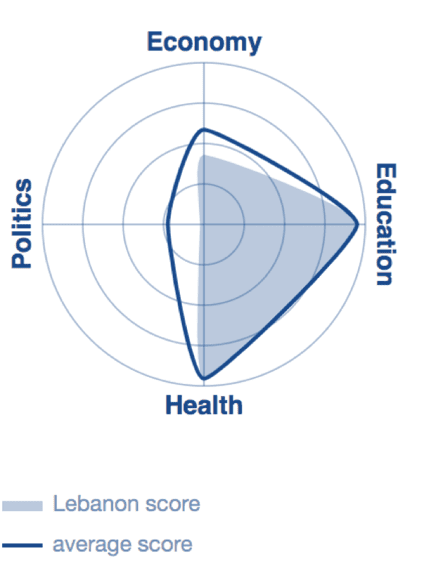 In many cases of developing and emerging economies alike, educational gaps play an important role in explaining differences in labor participation between men and women. When legal regulation or traditional customs hinder young girls from pursuing education, they lack the tools to access the labor force.

In Lebanon, however, the opposite is the case. The World Economic Forum’s statistics point out that Lebanese female enrollment rates in both secondary and tertiary education are higher than those of young men. Moreover, Lebanon ranks among the best countries in the world for relative female tertiary education enrollment. In many other countries with poor female labor force participation, enormous long-term investments in education are necessary to one day reap the economic benefits, whereas Lebanon has plenty of well-educated, but misallocated, labor-force-ready individuals at hand.

With high and rising unemployment rates, and great parts of the young, talented labor force leaving the country every year, one could ask how more labor supply could possibly be the solution for the lack of jobs and economic growth. The answer to this objection is provided by empirical economic research that suggests a strong long-term relationship between female labor-force participation and GDP growth.

Integrating women creates more jobs, which in turn increases GDP. In a developed study on macroeconomics and gender equity, the International Monetary Fund found that having an equal number of working men and women in the UAE would raise its GDP by 12 percent, while the same achievement in Egypt would raise its GDP by 34 percent.

A quick look into history confirms the picture drawn by the economic statistics. The European growth wonder following World War II would never have been possible without women joining the labor force in the absence of male workers and ultimately refusing to give up their newfound freedom in the workplace when male former soldiers returned from the front.

As a result, new businesses and jobs were created, leading to growth rates higher than anyone could have predicted. Other than national output, household income also increased significantly thanks to a second breadwinner in most families, allowing for endogenous growth driven by higher consumption.

Why didn’t Lebanon observe similar development after the civil war? Why did the women labor force participation only slightly increase since the 1990s? Part of the answer lies in culture and customs, but the biggest part lies in the unfavorable regulation and demotivating working environment for women.

The Importance of Good Laws and Safe Workspaces

Recent research by the World Bank unit for Women, Business and Law has shown that sound regulation, such as a sufficient length of paid maternity (and paternity) leave or accessible and affordable childcare are correlated with higher female labor participation rates. Unsurprisingly, Lebanon ranks among the countries with the world’s poorest legislation in many of these equality-enhancing areas.

Even if the existing trade-off between being a mother and a career woman were to be abolished, other structurally-discouraging factors would continue to face women entering the labor force.

Finally, with an average annual income of $7,000 compared to the $27,000 paid to men, it is not surprising that many women see little added value in entering the labor force.

The resulting puzzle is, thus, how Lebanon never came to introduce legislation that would increase the female labor force participation—a puzzle that is easily solved: with only 3 percent of the Lebanese parliament and 13 percent of the government being women, women’s rights and needs are simply never sufficiently represented. On average, gulf countries that are considered to be very conservative, are doing way better than Lebanon, because of the participation of women in politics.

When women are caught between the hard place of the status quo and the rock wall of regulators’ resistance to family-friendly reforms, it is hard for them to achieve equality.

The goal is to reach a point of equal opportunity, even if this does not lead to an equality of outcomes. This is where the government should intervene and where sociocultural barriers should be overcome. When this is achieved, Lebanon will finally be one step closer to structural economic sustainability.