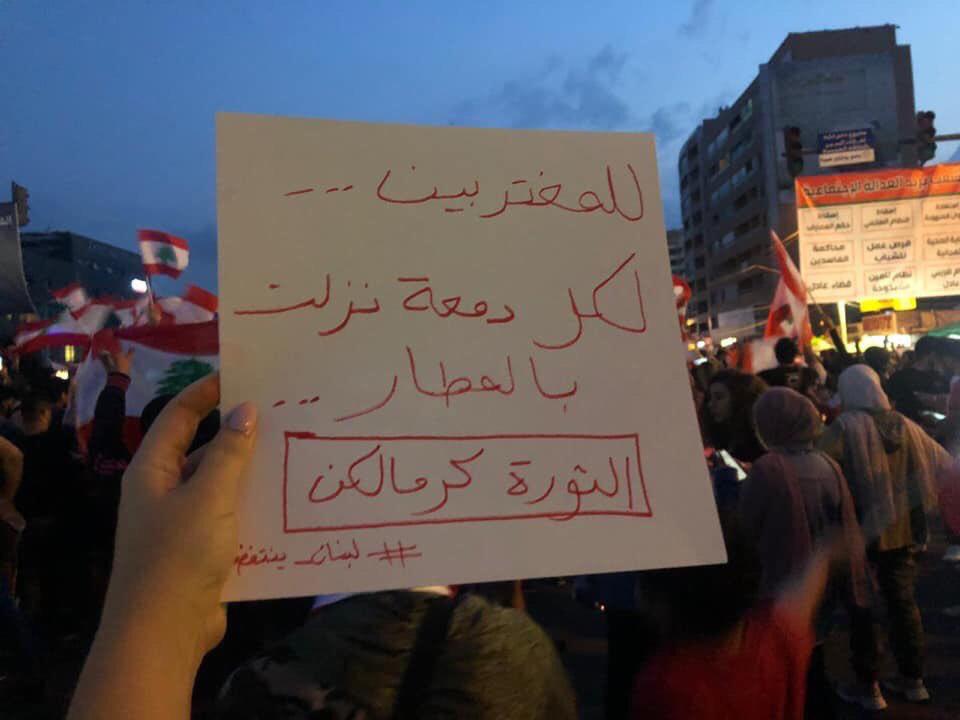 A sign that reads "To the expats, to every tear that was shed in the airports, the revolution is for you."
Home
Community Voices
Diaspora Voices

Diaspora Voices: A Letter To A New Beirut

Most conversations I have these days tend to end with a general air of disappointment. So many people are concerned with what my post-graduation plans will be but seem to hold pre-constructed opinions. My answer, as it has always been, is that I will come back to Lebanon. The general response is “Why?”

For the longest time, I was an anomaly. Lebanon was too corrupt and economically lagging to house the potential that many of its youth held. As such, they left to pursue careers, build families, and raise their children elsewhere. My cousins grew up abroad, and they often long to come back to Lebanon for the occasional vacation. A week through their return, they announce their hatred for the country and their desire to go elsewhere.

I blame none of these people. I wish I did not understand them so well, but their pain and struggles echo deeply within the Lebanese community of expats. We have been raised to believe that there are better options waiting for outside of the Lebanese borders, and many of us hold that to be true.

Lebanon has left so many expats traumatized from everlasting sectarian and civil tensions, living from pay-check to pay-check, working overtime to pay bills, struggling to overcome bureaucratic and structural issues, and more. Yet for the first time in a long while, I feel no need to keep my plans of returning home a secret, because they’re plans that are being shared by thousands across the world. A new air of hope is spreading right from the heart of the revolution.

For the past two weeks, Lebanese expats everywhere have been unable to lead their daily lives as per schedule. We have been glued to our phones, reaching for whatever last bit of news we can receive, from the minute we first open our eyes into the early hours of the morning. We share your posts and retweet your pictures, and in the process, we shed a tear or two hoping that we could join you in Riad el Solh, Martyr’s Square, Tripoli, Tyre, and everywhere else.

We write to our friends and ask them to stay safe as they take the streets, and our hearts swell up with pride when we see them still standing tall after long days of teargas from riot police, empty political speeches, and sectarian supporters’ intimidation. We get angry when CNN or BBC incorrectly depict the events, and write hateful comments that classify their work as poor journalism.

We hold and attend solidarity protests to echo your demands, pain, and hope everywhere else. For the first time in a very long time, many of us feel a great need to be home. Our ambitions abroad come secondary, the revolution comes first. The pride of being Lebanese, especially when you are not home at a growing time when you need to be, has arisen.

I have shared many conversations with other expats who have expressed endless concern for the protests’ proceedings. Every day is spent in a frenzy of pride and fear about what will happen next, but the people respond even louder each day by taking back what is rightfully theirs.

The protesters are fighting the tough fight. They are down on the streets of the country every day reclaiming spaces and restoring what is rightfully theirs. The movement is too beautiful for words, the Lebanese flag has never flown so highly, and the faces of the people have never glowed so brightly.

The Lebanese people have done more in two weeks than the government has ever been able to achieve. They have cleaned the streets of Beirut, fed and watered the movement from within, and reclaimed public spaces in ways that have never been done before. To some of us abroad, the Egg and Grand Theatre were always unexplored territory, marked aside as must-sees before we indefinitely left the country. Many of us never had the chance to see them.

Beirut is going to look entirely different when we return, but it will have never looked better.