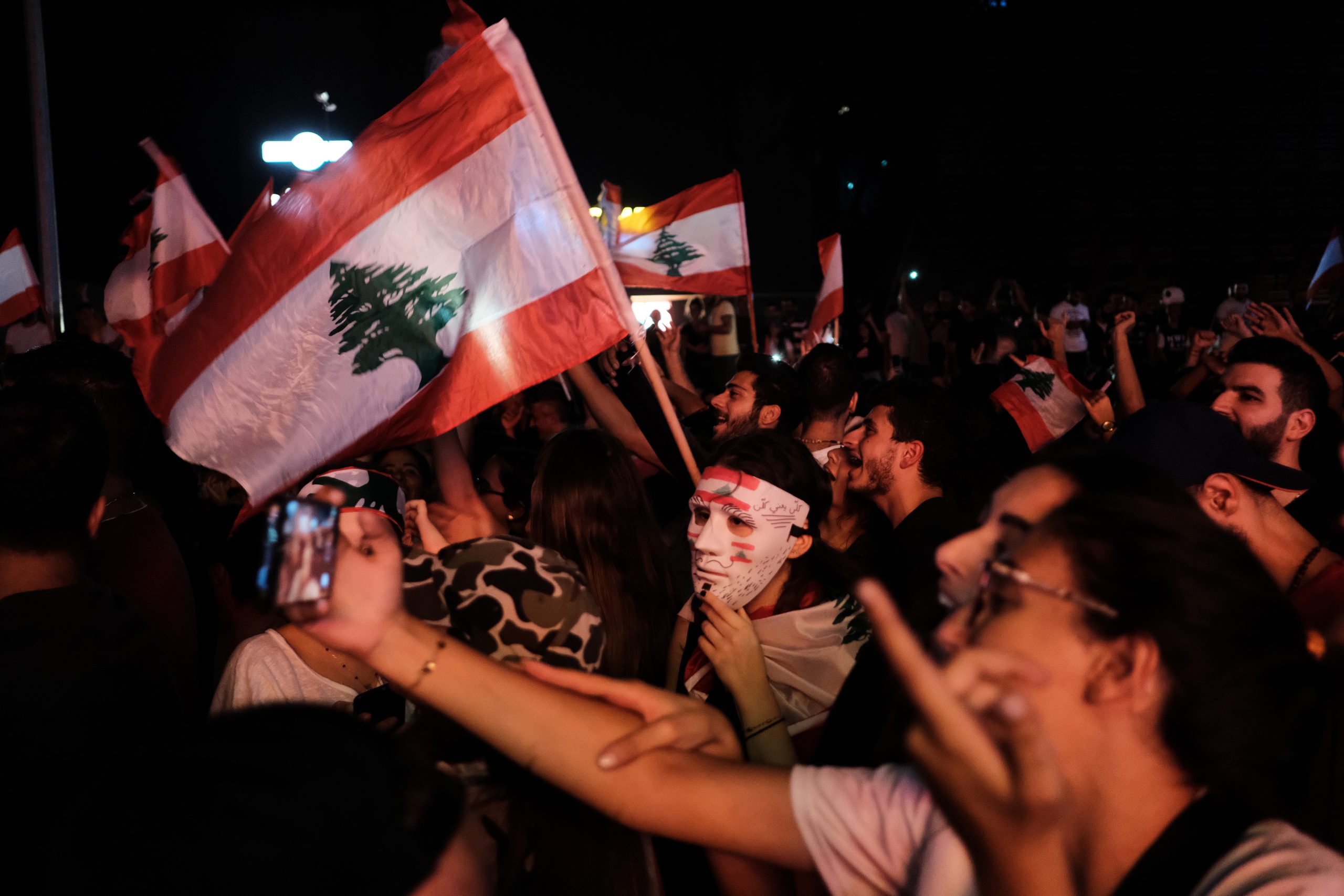 Austerity Budget 2020: What Were Lebanon’s Political Forces Pushing for?

“The people want the fall of the regime” has been echoing between hundreds of thousands of protesters who have been occupying Lebanese streets for the past five days.

Protests started on October 17 after Telecommunications Minister Mohamed Choucair announced yet another austerity tax to be taken by the Lebanese government: a $0.20/day fee for those utilizing different calling applications via the internet, such as WhatsApp and FaceTime. But what’s going on has been building up for months, both in terms of popular anger and further government extraction embodied by the political forces’ suggestion for the 2020 austerity budget.

Following five days of nationwide protests, Prime Minister Saad Hariri announced that new taxes and austerity measures will no longer be imposed. He also announced new tangible measures to be taken in a new economic reform plan. Demonstrations continue, with protesters losing trust in the government.

As an aftermath to the various popular mobilization movements which came about in the middle of the conversation revolving around the state budget for 2019, many social and political groups were wary of the policy developments for 2020.

Nationwide strikes were taking place months before the latest protests. Protests by Lebanese University professors, military retirees and public employees shook the state’s public administration from the beginning of May to the end of July.  Negotiations between different parties and groups ended the various strikes initiated to pressure the authorities against any attempt to reduce salaries and benefits or cut down on state services.

Several statements were thus released after many calls to begin drafting the 2020 state budget and negotiating within the Council of Ministers. Such statements were made to pressure the authorities into making sure the demands of their social groups are met after the budget is approved.

A letter sent by the Cabinet of the Association of Full-time Professors in the Lebanese University urged “the General Assembly of the Lebanese Parliament to add to its agenda law proposal 5120 during a meeting to be held on September 24.” Such a proposal constituted many demands related to pension increases and job security for Lebanese University professors.

Another statement released over a week ago by the President of the Contractor’s Syndicate Maroun El-Helo emphasized the Syndicate’s rejection of any new taxes to be decided upon in state budget 2020 “considering that no one is able to endure them in this particular phase which shows no signs of economic growth.”

Opposition to the lack of government affirmative action resurfaced during the detrimental state of the forest fires which spread on Monday, October 14 in areas such as the Chouf and Metin region. This created a panic on social media with regards to the environmental future of the country’s poorer and more marginalized groups in the absence of a responsible government.

Selling Out the State

In the midst of popular anger and anxiety, Lebanon’s political class is finding it difficult to justify a lot of policies it’s putting forward.

After the budget draft was prepared under the supervision of the Ministry of Finance, it was sent to the council of ministers to be discussed and negotiated. It’s worth noting that the nature of Lebanon’s sectarian accommodation system generally produces a redundant push-pull effect when discussing the budget.

With regards to the content of the discussion, proposals submitted by the Free Patriotic Movement and the Lebanese Forces stressed on extreme forms of austerity in different domains. Both proposals stressed on extensively cutting down on employment.

The latter, however, suggested serious steps in favor of privatizing major sections of the telecommunications industry and the Beirut Port, alongside abolishing many public institutions “without further use.”

On the other hand, they proposed that industries related to water, oil, the Beirut Stock Exchange and wheat production go under a process of Public-Private Partnership (PPP).

In their paper, FPM chose not to outline specific budget policies, instead advocating for the “general reduction of expenses in the public administration and different public institutions.” General ambiguity has been favored by the party to avoid any public controversy or criticism from targeted groups

However, they focused a great deal on the “issue” of refugees and their “burden” on the economic situation in the country. On that basis, they proposed a “clear and strict government policy to make the international community supply the country with the necessary financial assistance.”

No public tensions between the forces in the cabinet erupted with regards to these austerity measures, and no policies were proposed to offset the depreciation in real wages which may come about due to signs of a weaker currency. Instead, the language of “speeding up the process” and “getting it done” have surfaced on the mainstream media.

CEDRE & The Language of “Business as Usual”

In light of the anger on the street and the internal dynamics of the cabinet, previous public announcements by different political leaders such as Speaker of Parliament Nabih Berri and President Michel Aoun fixated on their agreement to avoid any delay in the 2020 budget.

A little over a week ago, Berri stressed that he will call for a meeting of the country’s emergency economic committee if the draft is not ready by the “constitutional deadline.” No public statements alluded to the content of the draft’s extreme austerity proposals  and the so-called debates taking place.

On the other hand, without mentioning any of the disagreements persisting in the Council, Minister of Media Jammal al-Jarrah stated that several parties have deliberately slowed down the process to meaninglessly and repetitively re-discuss different presentations.

Notwithstanding that, there was a collective agreement by all opposing factions that cuts to the budget should be made at any cost to satisfy the requirement put forward by international organizations in the CEDRE conference.

In general, leaders became anxious because of the negative feedback given by external inspectors who had yet to see “reforms” being implemented in the public sector, specifically with regards to Electricity of Lebanon (EDL), cutting down on unproductive employment, and projects within the public sector.

During his trip to Paris, Prime Minister Saad Hariri was surprised by a negative report prepared by the French envoy Pierre Dukan, who expressed doubt that such reforms could be pursued within the designated time frame.

The budget was expected to pass today, October 22.