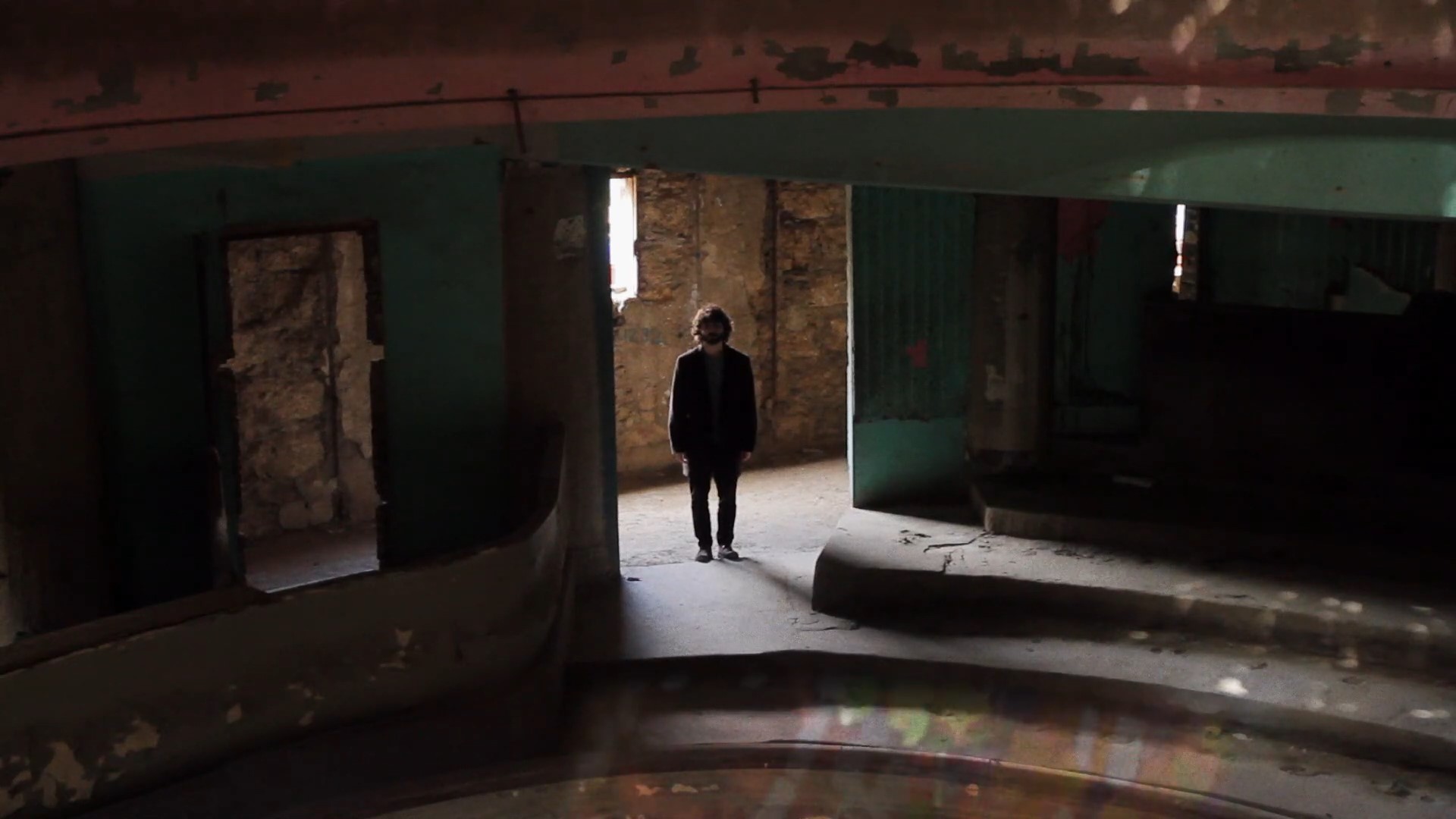 Interbellum takes you down a winding, nostalgic road with Dead Pets, Old Griefs

Interbellum’s Karl Mattar would much rather let his music speak for itself than sit for an interview, he lets me know on the day he’s filming a music video for “Ready to Dissolve.”

On that day, he goes from sneaking into and walking around Beirut’s Grand Theatre in a black overcoat to chasing an old run-down car with doors that won’t open. The situation itself reminds me of Dead Pets, Old Griefs, Interbellum’s latest album: They’re both messy collections of things that feel entirely different but are ultimately, and a little bit masterfully, connected.

Between one song and the next, Dead Pets, Old Griefs sonically leaps from raw vocals and minimal instrumentation to broken chords and overpowering synths. At first, it’s like digging out childhood memories from a dusty photo album with badly-faded colors or reading through an old journal with half its pages ripped out.

Giving the album a more thoughtful listen takes you down an experimental, winding yellow brick road that leads to nowhere in particular. Ghostly lyrics and a heavy hopelessness follow you everywhere on your journey, from the deceivingly-upbeat and heavily-distorted For Air (Curtains torn and defences breached | And your hand ever so slightly out of reach | I’m squinting back against the glare | But what once was isn’t there) to the intimately-written and slow-building PQRST (Go to bed fully clothed | Count the candles | Think of those we lost | Toss, turn).

Perhaps the man behind Interbellum would rather let his album speak for him because it is crafted in a way that says tons on its own. Interbellum itself is a fresh start for Karl Mattar, who’s managed to move into more experimental sounds than the dreamy acoustic aesthetic he was recognized for as Charlie Rayne. In a way, the conveniently-titled Some Ghosts feels like an ode to that raw and folky past.

Dead Pets, Old Griefs is a product of many pasts. Its beauty lies in its timelessness, an ability to reach out both within and across generations by touching on the haunting losses that everyone can find in their personal histories.

Two days after initially meeting and on an early Monday afternoon, we sit in a busy Mar Mikhael pub. Mattar’s flight back to Berlin, the city he moved to late last year, is the very next day. He is quiet and reserved, reflecting on and thinking about his music in long bouts of silence. He is unhappy with the way he formulates his answers, but pushes on.

Our waiter accidentally breaks the ice by bringing us arak instead of the beers we asked for. Mattar often starts his answers with “I don’t know,” only to nonchalantly counter himself with a well-thought-out answer within the very next minute.

How did you start writing music as Interbellum instead of Charlie Rayne?

Karl Mattar: I just wanted a fresh start of sorts. I did Charlie Rayne for a few years, and I kind of wanted to start over and explore other things that I felt I couldn’t really do as Charlie Rayne.

What are some of the things that you couldn’t explore as Charlie Rayne?

I was doing this acoustic thing and I felt like the project had acquired a sort of identity. I also was attracted by the idea of transcending a sort of personal identity. I felt like if I had a project name, it would be a bit more liberating. It’s just a name after all, it doesn’t matter that much. It’s like getting a new haircut. The real answer is probably that I simply wanted to.

When did you move to Berlin?

After the album release.

Any specific reason why?

And do you think living abroad or touring abroad changed your views of Lebanon?

Not really, but it’s interesting being exposed to other scenes. Playing live shows abroad is kind of different. Being here and having this sort of small scene, and then being outside and exposed to a wider variety of — for example, audiences feel a bit different. But ultimately, it’s all the same really. Has it informed my opinion of here? Being here has informed my opinion of here.

But sometimes you go abroad and–

I think everyone’s experience is different. One thing is that concerts abroad feel less like social events and more like concerts.

Is that a good thing?

Let’s (finally) talk about “Dead Poets, Old Griefs.” There’s a big change in sound between it and the older album. It’s also very raw and emotionally charged. How do you account for that change?

Just the songs. The songs dictate everything. The sound just follows the songs. There’s also a bit of preference, and what I’m into, and what I’m listening to. And there are decisions made when I’m writing songs and trying to find a production that rings true and a sound that rings true to the songs themselves. There are some other considerations, but mainly it’s the song that dictates the approach.

Can we talk about these different considerations?

Like whatever I’m listening to at the moment, and the way we decide to make the record. For example, we decided early on that the first record was going to be live and a bit more raw. Two guitars, bass, drums, and no synthesizers.

There were decisions made. These decisions stem from the songs, but there’s also a steering that happens. In this case I guess there was no real band to speak of, so it ended up being mostly me and Fadi [Tabbal], which allowed us to steer the songs in another direction.

How was the experience working with Fadi Tabbal?

A lot of fun. Very inspiring.

I bet he has a lot to offer.

Yes, he’s very inspiring and resolved. He takes the songs somewhere new but, at the same time, he’s deeply attuned to the material and to what the songs need. We’re also good friends, so we see eye to eye. It’s a complementary relationship. A lot of it is us being friends, and being inspired by the same things, but having enough different opinions that push the project further.

So you said that you take into consideration what you’re listening to in the moment. So, what were you listening to before the album came out?

Classic. I think I was inspired by solo artists who make music as a band. For example Atlas Sound by the lead singer from Deerhunter. And Sparklehorse is a big one. I think also Mount Eerie is a big influence, but even [proper bands like] Yo La Tengo have always been an influence. I think the Beatles was the biggest of them all.

Yes. But you know, people talk of influences in terms of sound, but there’s also a lot happening lyrically. I think none of the artists that I have listed have that much influence on my lyrics. And there are other influences. People talk about sound, but I think it goes deeper than that. But yes The Beatles’ production approach was a huge influence.

What specifically in that approach?

Studio experimenting and sound. Just experimenting with the way the sounds are made or arranged. You’d listen to Penny Lane and you’d think it’s a very simple recording. But if you actually read up, you’ll see that there’s like three different pianos stacked on top of each other. One of them is slowed down, another sped up. So, we definitely had a lot of fun with that sort of stuff.

I really like the idea of pop songs that are twisted and stretched into really weird shapes. And I think that’s something the Beatles did really well.

Before this interview you said you had difficulty formulating your thoughts.

I do and I’m not happy with the way I’m saying things.

I think you’re saying them slowly, but they’re definitely coming out nicely.

Yes, but for every answer, you can say something else and it’d still be true.

For now, let’s talk about the album cover?

It’s a painting I did when I was six or seven. I found it when I went up to my childhood home to empty it and I saw the painting still on the wall and it really moved me. It fit perfectly with the music. It was like this bird was a witness to all of my childhood, just being there. There was something sad about the bird.

I think it’s the eyes, I think he has a very sad look in his eyes. And Josette Khalil did a great job. I was adamant on having a painting. I didn’t know if I wanted to mess around with the painting or just have it there, and I think she framed it all really nicely.

Is there something in your music that, when people listen to it, they say this is distinctively Interbellum?

I don’t know. Maybe others can tell me, but I don’t think so. Do you think there’s anything that ties everything together? My voice is the obvious one because it’s the most personable, so maybe someone would know it’s me, but I don’t think I have a characteristic. Good songs? [Laughs]. I don’t really care about that.

So, what do you care about?

Do you think that how you perceive your album has shifted? From then till now?

Yes. When I’m making it, I’m way too close to it. I think now I listen to it with a fresh set of ears, or with a bit of distance, and I discover things that I was too close to see when I was doing it.

Little details in the songs. It’s really hard to explain, but it’s like listening to a song on a crappy radio and then putting on headphones and noticing the little things. That still happens to me on the record. I don’t know if that made sense.

Things like hearing new harmonic relations between things that were kind of subconsciously done, but that’s just due to the nature of the work with Fadi. We just go for it and we don’t overthink –or at least he doesn’t. So we come up with something in the studio, and then I hear it later and realize things about it that I hadn’t thought of before. It’s fun and really cool.

You’re generally a quiet and reserved person from what I’ve noticed. Are you surprised with how vulnerable you let yourself be on the last Interbellum album?

It’s always been vulnerable, I think. Maybe on this one, things were said a bit more plainly. Not plainly, but with less wordplay and less obfuscation. But it’s always been that way.

At some point, I did think about how this was kind of intense and how you’re allowed to do that in music. You probably would sing things that you wouldn’t say to anyone. There’s a sort of understanding that songs are allowed to be emotional, but I forget sometimes that they are that vulnerable. Sometimes they also just seem like songs to me and I kind of forget it until someone actually brings it up.

It’s true, and that’s so interesting.

Yes, but I don’t think that the nakedness has the same consequences as it does in daily life, you know?

As it is with all art.

Yes. You record the songs and sing what you want, and then you forget about it. I don’t even know if anyone really reads that much into it. I guess if millions of people were going to hear this song, I might feel a bit strange. [Awkward laughter at the self-deprecating joke].

There’s a lot of music that is vulnerable, but there’s a distancing when you make any sort of art. It’s interesting, it’s like a pass that musicians get.