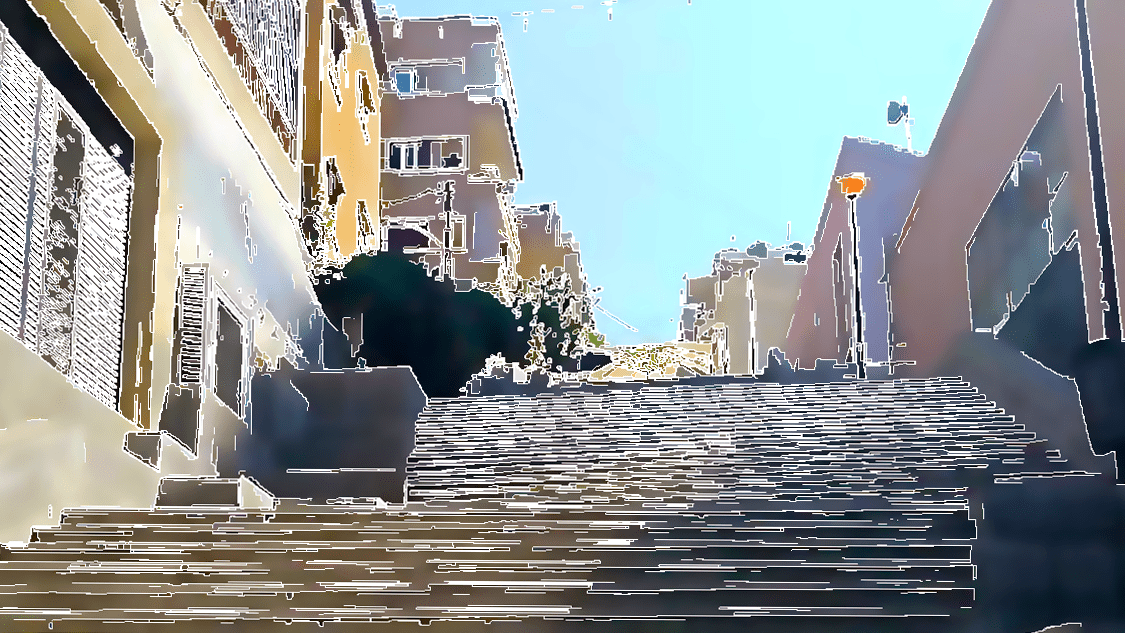 Beirut’s historic landmarks between resilience and destruction: the case of Vendome Stairs

The historic Vendome Stairs in Geitawi have undergone profound changes in the last few decades, while facing the constant threat of deterioration and destruction because of surrounding construction projects. The stairs stand as one of the surviving landmarks in Beirut, a shared public space that different activists and civil society organizations have fought to preserve over the years.

In summer, a stream of people animates Geara Stairs, one of the numerous staircases connecting Mar Mikhael and Geitawi. Locally known as “Vendome Stairs” because of the cinema that once stood near it, these historic stairs recently took a profound turn for the worse. As a result, civil society associations, artists and NGOs mobilized in a bid to save the area.

With alternating periods of various initiatives and times of slower activity, the involvement of civil society organizations in the area testifies to the presence of a vibrant community in Beirut. Activists and citizens are eager to save the heritage of a city with great historic value but under constant threat from new urban construction projects.

“Vendome Stairs risk losing their identity,” Ahmad Sayyed, a local artist who has lived in the area for 17 years, told Beirut Today as he looks at the empty wall facing one of the cafés on the stairs he discusses.

“That wall,” said Sayyed, “was once full of colors.”

In 2015, Sayyed and other artists picked up brushes and started live-painting the temporary fences covering the construction works happening on the other side of the stairs. Nights in Vendome Stairs were lively and full of people coming together to either contribute or observe the artistic performances.

It was a period of intense activity in the neighborhood, with many events organized to keep the area alive. Notably, the festival “Nehna wel Amar wel Jiran,” launched in 2011 by the performing arts company Collectif Kahraba, gathered people together for artistic performances and live music.

“We wanted to bring people together and strengthen the feeling of community in the neighborhood,” said Aurélien Zouky, co-founder of Collectif Kahraba. The area surrounding Vendome Stairs has indeed the peculiarity of sharing human connection in public space, where people meet, greet each other and come together.

The residents were involved in various ways, including the preparation of food, so that an organic interaction between residents and visitors was established in the iterations that came in the following years.

Recent activities in the area

This festival represented a pioneering experience for a number of successive initiatives from local NGOs, associations and residents all around the area. From music events and artistic performances to the more recent walking tours around Mar Mikhael and Achrafieh, recent  projects have shared the common goal of reviving a landmark of Beirut’s heritage that is at high risk of deteriorating.

“In February 2019, more than a hundred people took part in our walking tour in the Achrafieh neighborhood that started exactly from Vendome Stairs,” Alan Ayoub from Achrafieh Stairs told Beirut Today.

In collaboration with other associations, Achrafieh Stairs has intensively worked in the area on many levels.

“These stairs are a very unique feature of Beirut, difficult to find anywhere else,” Ayoub proudly affirmed, eager to explain the variety of projects developed over the years around the Vendome Stairs. “If more people used them, we could even reduce the traffic problem in the area.”

Why so many associations have focused on the Vendome Stairs?

“The numerous stairs between Geitawi and Mar Mikhael hold the memories of decades of history,” said Diala Lteif, an urban planning specialist.

The stairs, according to Lteif, date back to the Ottoman era and hold precious stories of life in Beirut during the ‘50s and ‘60s. The Vendome Stairs in specific were part of the main pathway for pedestrians looking to arrive at the old train and upper side of the area.

Despite years and years of pedestrian use and a succession of difficult events over time, it is only now that they’ve changed in appearance in such a way that they have become barely recognizable from just a few years ago.

“The construction of the big tower at the bottom of Vendome stairs represented a major turning point,” said Lteif. Standing in stark contrast with its surroundings, the Aya Tower offers a vivid image of the ongoing process that is replacing historic landmarks with modern buildings in Beirut.

The tormented history of Vendome Stairs is but an example of the shifting urban landscape threatening Beirut’s historic landmarks.

Sometimes, mobilizations to save Beirut’s heritage have been successful. Such was the case for the campaign organized by Achrafieh Stairs to prevent the demolition of Mar Mikhael’s Massaad Stairs on November 14, 2013.

“In 2013, there was a plan to remove Massaad Stairs for new building projects,” Ayoub explained, going on to discuss how his organization contacted many government officials to add the threatened stairs to the official heritage list of the Ministry of Culture. “In the end, we managed to protect them.”

Similarly, Vendome Stairs have been resilient to the attempts at demolishing them, thanks to a series of collective mobilizations in September 2013.

In other cases, extraordinary activism efforts did not suffice. The active campaign in 2017 to save Mar Mikhael’s historic Laziza building, the first brewery in Lebanon and the Middle East, did not succeed. Rather, the entire building was demolished and the new construction project of Mar Mikhael Village was launched.

Still, Beirut is not silent.

All around the area, there are evident signs of opposition. Walls have become a major instrument for activists to make their voices heard while defending their city’s heritage.  From graffiti to writings on construction fences expressing dissent, people continue finding creative ways to raise awareness of the value of historic landmarks at high risk of destruction and total oblivion.

All photos courtesy of Veronica Merlo

Still resisting despite an uncertain future

Despite constant changes and the uncertain fate that face numerous other historic buildings in Beirut, Vendome Stairs continue being resilient.

While facing difficulties to organize events primarily because of the economic crisis, people continue gathering on these stairs. Beyond being a practical passage, Vendome Stairs has affirmed itself as a unique public gathering space with great historic, cultural and artistic value. The active civil society in Lebanon has dedicated immense energy here to fight for a cause of high priority to the city: preserving Beirut’s rich heritage rather than destroying it.