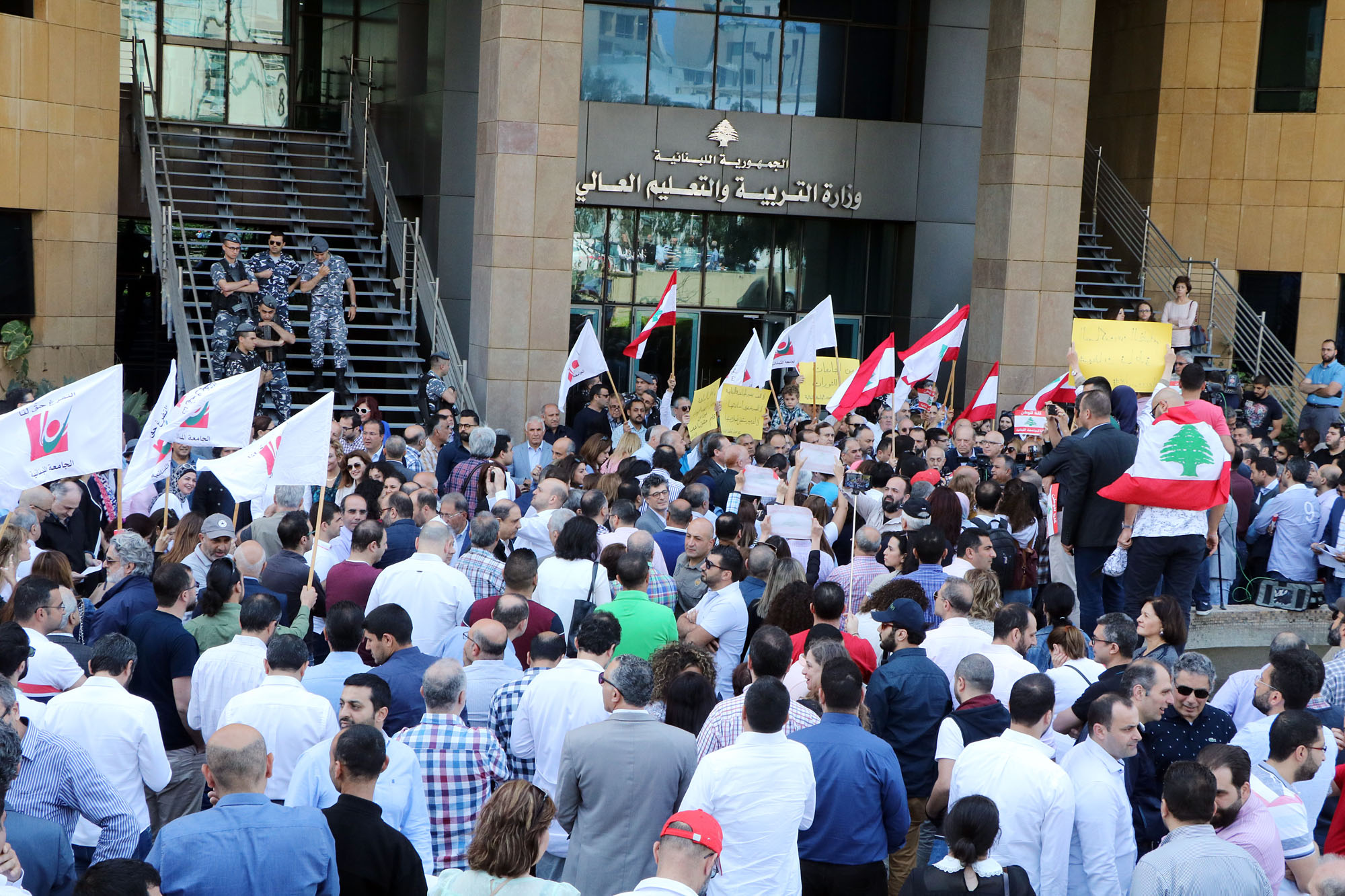 Professors at the Lebanese University have been on strike for the past three weeks. (Al Liwaa | Jamal El Chamaa)
Home
Community Voices
Activism

Full-time professors at the Lebanese University have been on an open-ended strike since May 6, demanding their rights from the government but also putting the futures of thousands of students at risk.

The professors are protesting against potential cuts to both their wages and the budget of Lebanon’s only public school, not for the first time in the institution’s recent history. Just last year, professors also demanded a salary increase following the approval of a new pay structure for the public sector. The salary scale was approved in 2017, after a decade of no increases had passed and the salaries of public workers had lost over 80 percent of their purchasing power because of inflation.

“The strikes are understandable. The professors are demanding their rights, and putting their foot down is the only way possible, ” said Lamiz Amhaz, a post-graduate English student from LU’s Faculty of Letters and Human Sciences in Dekwenneh. “And as, hopefully, future teachers, we might face the same issues. It is, however, delaying people’s career plans. A lot of people need the degree for a better living, not to mention of course the summer makeup sessions. All in all, it’s in the hands of the government, so it’s going to take a while.”

“The professors are demanding their rights, and putting their foot down is the only way possible.”

The Lebanese University strike isn’t even the only one happening in the country right now. The government approved items in the 2019 draft state budget that have driven the country into a frenzy. The austerity measures aim to reduce the local deficit to 7.6 percent partially at the expense of government employees by limiting their benefits and delaying their retirement.

Soldiers worried about losing pensions have burnt tires outside of the Parliament building, with police using water cannons to push them back, these past two weeks. Drivers were rushing to gas stations amidst fears that gas in the country would run out because customs employees were protesting for their wages and benefits. Central Bank’s staff and civil servants also held strikes to pressure the government. The situation at the Lebanese University could easily be forgotten, but not by the students whose futures hang in the balance.

“I’ve paid my tuition and I’ve done all that’s expected of me, but I want my right, the right to an education,” said Romy Yazbeck, a third year student from LU’s Faculty of Public Health. “The semester went to waste. There was material that I would have liked to learn, especially considering this is the most important year for my major.”

“The semester went to waste.”

Intensive courses will most likely be given following the end of the Lebanese University strike, according to several students. Students with internships, travel plans, and other previous engagements will have to rethink their plans. Material missed because of last year’s protests was also given over the summer.

“I have a trip outside of Lebanon this summer, and while I already paid for the expenses, I don’t know if I will be able to go,” said Pamela Chamoun, a third year English student affected by the Lebanese University strike. Others were concerned about the quality of the education they will be receiving in the summer.

“Of course, they’re going to give the material hastily because they’re not going to have the energy to teach properly in the heat and without ACs,” said Yazbeck, reflecting the lack of government support for the country’s only public university. “My summer is gone and the things that professors are supposed to teach me, I’m going to teach myself. To be honest, I regret going into the Lebanese University.”

“To be honest, I regret going into the Lebanese University.”

Despite having 38 percent of all enrolled university students in Lebanon, the Lebanese University remains severely underfunded. Government expenditure on public education amounted to 2.1 percent of the GDP in 2015, less than half the average in the world for that same year.

“There’s no university, there’s no teaching, there’s nothing. I’m probably going to have to postpone my graduation until next year. I don’t know what I can do,” said Jad Abou Abdo, who is pursuing a Master’s in Cinema from LU’s Faculty of Arts.

“I’m probably going to have to postpone my graduation until next year.”

The Lebanese University strike, however, is certainly not for nothing. Estimates suggest that a 10 percent cut to the salaries would lead to a 40 percent increase in poverty among households with public sector employees, or 50,000 more impoverished citizens in Lebanon.

In stark opposition, many of Lebanon’s politicians are the richest and most well-paid in the region. Prime Minister Saad Hariri, according to Forbes, has a net worth of $1.5 billion. Riad Salamé, the governor of the Central Bank, is the highest paid public employee in the country, earning L.L. 40 million (more than $26,000) per month. A member of the Lebanese Parliament is paid 18 times the national minimum wage, a higher ratio than MPs in countries like Tunisia, Jordan, and the UK.