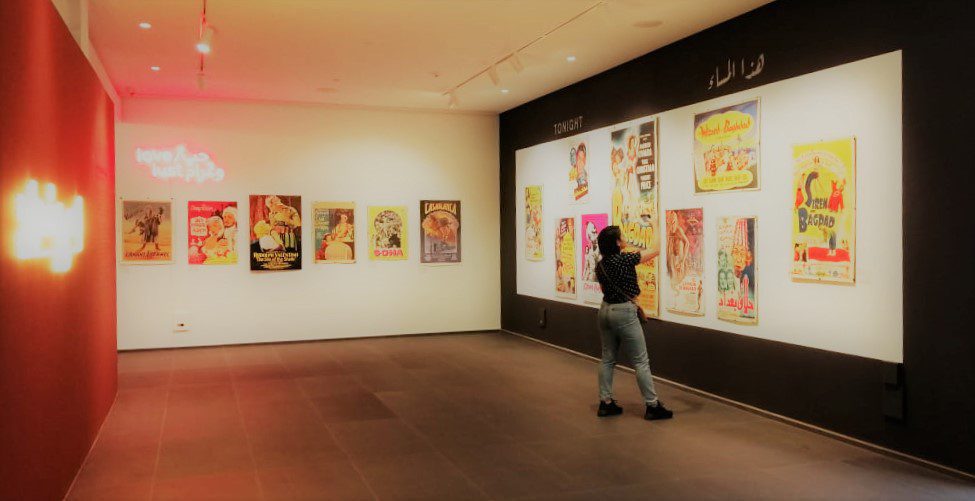 A look into the "Thief of Baghdad Exhibition." (Sandra Abdelbaki)
Home
Better Living

Thief of Baghdad: The meanings behind Western posters of Arab cinema

By Sandra Abdelbaki and Nour Abdelbaki

All of this can be seen in “The Thief of Baghdad,” an exhibition that started in Dar el Nimer almost three months ago. The exhibition, taking place from February 20 till May 25, mainly invites the audience to explore a series of aesthetic posters produced in the West between the 1910s and the 1990s. The posters were taken from the personal archive that Abboudi Abou Jaoude, a publisher and an avid collector, managed to build up over the years.

“It all started with my interest in cinema. Going to the movies was my favourite thing to do,” said Abou Jaoude to Beirut Today.

The posters in the exhibition are a series of graphical productions designed by French and Italian artists for several oriental-themed Western movies. Omar Thawabeh, the Communications Arts Officer of Dar El Nimer, describes the purpose for this archival exhibition as showing the public the beautifully and whimsically-crafted posters that offer a perspective about the graphic art of the early to mid 20th century.

“The exhibition is an invitation to take a step back and look at the bigger picture and not to take images for granted,” said Thawabeh. “Image is really powerful, especially considering the fact that Western media was able to demonize Arabs through images only.”

What strikes visits in the Thief of Baghdad collection is the orientalist theme it engages in, with “orientalism” being a term originating from Palestinian-American scholar Edward Said in 1978. Said argues against the “innocence” of Western studies conducted on the East and dubs all that discourse as being pejorative and colonial.

As you stare at the details of these posters, an orientalist narrative that objectified and sexualized Arab women –and pictured hypermasculine Arab men– stares right back at you as an obvious common element to them.

Gender stereotypes are rampant in these posters, reflecting the still-existing orientalist projections of Western artists. Arab women, today in the West, are seen as either being oppressed or exotic. Or a mixture of both.

The Thief of Baghdad reveals the over-sexualized image of the “belly dancer” that was pervasive in Western posters, which portray her to be submissive and simultaneously promiscuous. As for the Arab man, he is seen as a hairy, aggressive and violent brute in most cases.

The details of the posters also reveal interesting and inaccurate stereotypes of Arab cultures and environments. The poster of the Lebanese movie “La Castellana del Libano,” for example, shows historically-imprecise elements that include  irrelevant Islamic architecture and camels in the heart of Beirut at a time they were rarely seen in the city.

This is also true for Abou Jaoude, who finds a creative process behind these posters that is less present in modern posters.

“Producing posters took time and effort back then. It would take the poster makers almost a month to do it,” Abou Jaoude said.

Over the years, the representation of Arabs in Western media has shifted to the worse following episodes in modern history, according to Thawabeh.

“I believe the so-called Arab-Israeli wars have led to an active dehumanization in the media and in film,” said Thawabeh.