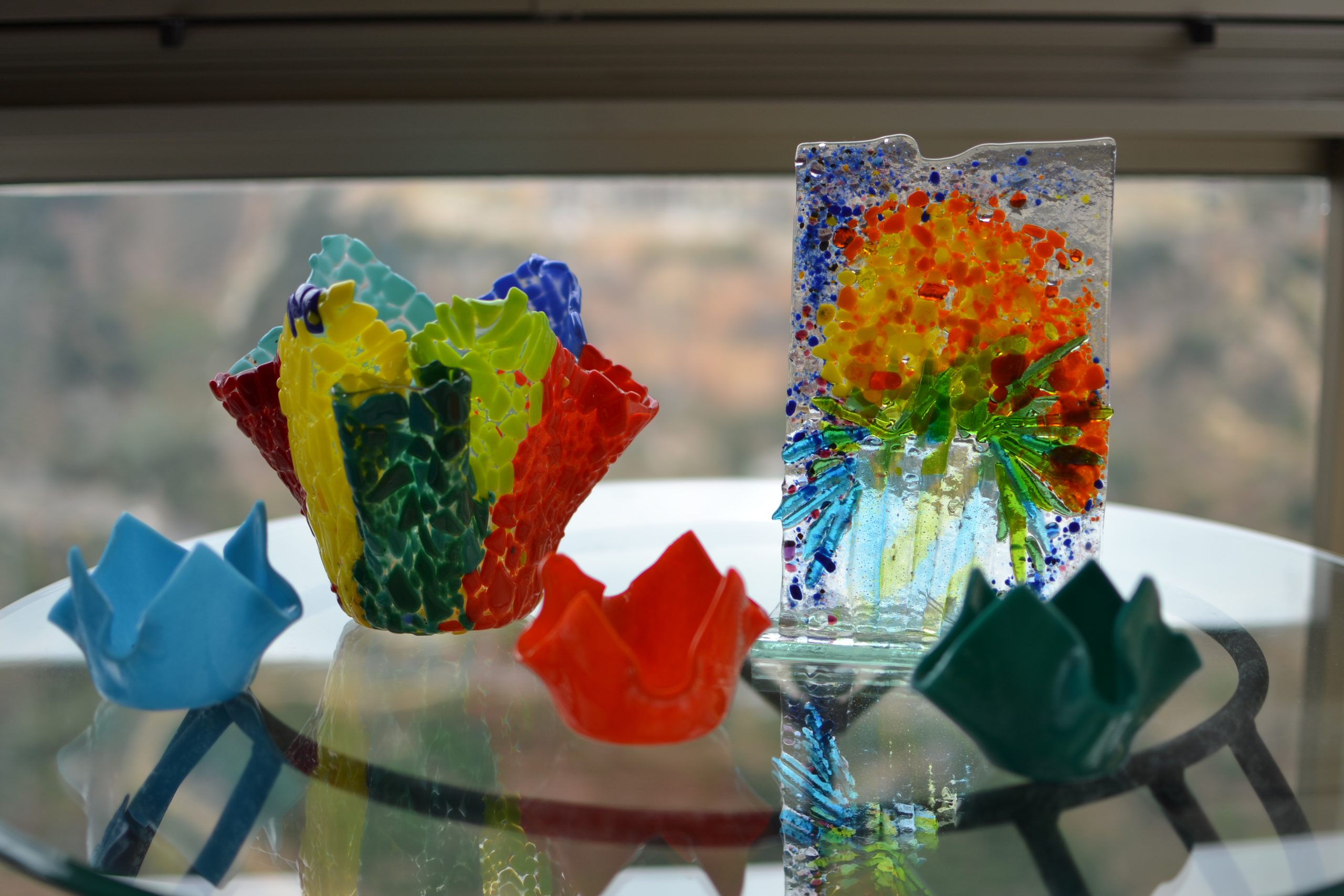 They start telling you to do as you’re told from a young age, until you learn to sacrifice what you truly want for what those around you think you need. It doesn’t always have to be, or continue to be, that way. Changing careers is having the courage to go from what you are expected to do, to what you really want to do. However, this requires time, effort, and sacrifice. The Bkassine-born artist Nada Helou was an interior designer teaching at the Lebanese University for twelve years before learning about the art of glass fusion.

“I was shopping for a kiln for ceramics and I encountered an Italian woman in the store. We spoke and I found out that she was a glass fusion artist and teacher,” said Helou, whose interest was peaked enough by the coincidental encounter for her to take multiple fusing lessons.

“I ended up liking it so much that I began fusing glass for myself as a hobby,” said the designer, eventually shifting her professional focus to glass fusion.

What Is Glass Fusion?

Glass fusion was developed as an ancient art capacitating original ideas, and is characterised by the layering of recycled glass pieces. Currently, glass is made in sheets of 60 x 120 cm, each in unique color with an unknown composition to all but the manufacturing family. The sheets are cut and placed on a transparent sheet of glass in their projected design. These layers are then put in the kiln at 740-800°C, with glass beginning to melt at 500°C until all the layers melt into one, hence the “fusing.”

The piece is left to cool down in the kiln for the next six hours to avoid cracks and breakage due to the rapid change in temperature. The fused glass sheet is then placed again in the kiln, this time in a powdered mould made of ceramic, or stainless steel to take form, a process known as “slumping.” The product is then subject to minor retouches, and is finally signed and ready for display.

Sensitive to time and delicate in structure, fused glass requires the artist’s full attention and artistic ability. Difficulties, however, extend beyond the process of fusing itself, as equipment and supplies are often difficult to attain.

“All items, the tools, the glass, the kiln, and the diamond, must be imported from either the United States or Italy. Shipping has a high cost and takes time to arrive,” explains Helou.

Yet, there is a reason that Nada Helou is still motivated to pursue her passion for glass fusion: her art helps people.

Helou recounted how an American woman suffering from depression purchased two pieces from her and placed them in her house. Friends of the purchaser informed the artist that the woman had slowly begun recovering.

“Every day, she looks at my work for half an hour and it relaxes her,” said Helou, “So I thought that in every job, there is a chance to help people. My aim then became to help people and not just to decorate houses.”

The latent outcome of her work increased the Lebanese artist’s sense of accomplishment by providing an adequate and helpful medium for meditation that had potential for positively influencing others’ lives.

Being initially inspired by the beauty of her village’s nature, Helou now garners inspirations from research through books or the internet, as well as other unrelated stimuli. Manufacturing glass is restricted to factories, but creativity abides by no such limit, encompassing gatherings, restaurants, religious gatherings, symbols, or even something seen on the streets.

“New ideas are always arising, and there is always room for improvement and expansion on previous concepts,” she explains, describing perfection as being seldom achieved.

Apart from her upcoming exhibition, Helou is currently working on a personal project that pays homage to her city of birth, writing her father’s name in glass on the wall of the Bkassine house he had left her.

Her last exhibition in Saudi Arabia four years ago proved to be of substantial success after a vast majority of her work was sold to international visitors and art aficionados who were flattered by her live presence. The artist prides herself in her ability to promote and illustrate a positive picture of Lebanon in the mind of foreigners through the beauty of her work.

After what will be a five-year long hiatus, Nada Helou is hosting another exhibition this year. In addition to her classic collections, and instead of camels and palm trees, designs of traditional Lebanese homes and pine trees will make their debut.